10 things most fans don’t know about the Detroit Tigers 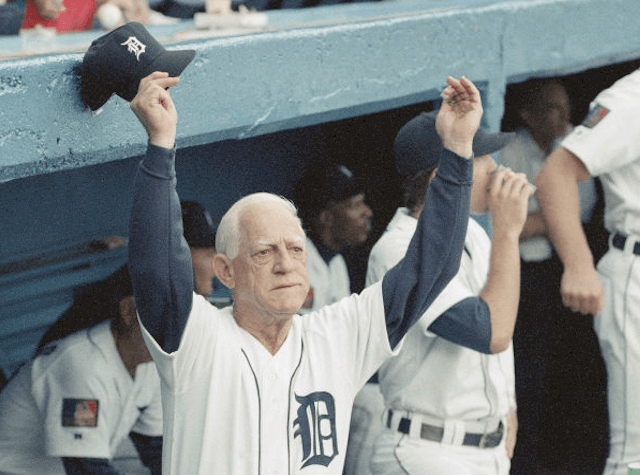 How many of these items from the history of the Detroit Tigers did you know? Tell us in the comments section below.

#1. The team nickname had nothing to do with socks

Many fans think the name “Tigers” originates from their striped socks. While the team did have one red stripe on their uniform socks in 1901, that’s not where the nickname “Tigers” came from. In the 19th century several military units in Michigan and Detroit earned the nickname “Tigers” because of their tenacious fighting. As pointed out by author Richard Bak, the Detroit Light Guard unit was nicknamed the “Fighting Tigers.” In the 19th century Detroit’s National League franchise was alternately known as the “Wolverines” or the “Tigers.” When the American League franchise debuted in 1901, the latter name was adopted.

In case you’re wondering, it wasn’t until 1927 that the Tigers wore orange striped socks with their uniforms.

We’ve already written thousands of words on this blog about the myths surrounding Ty Cobb, whose character was besmirched after his death, so we won’t go into all of it here again. But, we will point out that Cobb was a strong supporter of the integration of baseball by african americans. He wrote letters and made public comments supporting black players in the major leagues long before Jackie Robinson broke the color barrier in 1947. Cobb was a fan of Robinson’s play and he met with and sat for photos with many african american ballplayers in the 1940s and 1950s.

#3. The Bird wasn’t talking to the baseball

As many times as he told reporters he wasn’t talking to the baseball, the baseball scribes just wouldn’t listen to Mark Fidrych. The 1976 American League Rookie of the Year was a sensation that summer, winning 19 games and packing ballparks with fans who wanted to witness his antics on the mound.

But Fidrych was never talking to the baseball. He was talking to himself, telling himself to follow his mechanics, to keep the ball down, and so on. The fact is, Fidrych talked all the time, he was a chatterbox. Teammates would sit far away from him in the dugout on days when he wasn’t pitching because Fidrych chirped so much.

Had he not been vacationing in Hawaii, Babe Ruth would have become manager of the Detroit Tigers. During the 1933-34 offseason, team owner Frank Navin knew he needed a winner in his dugout. He had a talented young team, built around Charlie Gehringer and young slugger Hank Greenberg. But the Yankees were still the class of the league and everyone was chasing them. Yankee slugger Babe Ruth was near the end of the line and New York was ready to part ways with him. Navin decided to offer the Yankees some cash to acquire the rights to the great slugger, who wanted to become a manager desperately. But Ruth was in Honolulu on an extended vacation, and Navin was unable to meet with him. Instead he offered Connie Mack a deal to acquire catcher Mickey Cochrane. The move proved to be just what the Tigers ordered: they won pennants in each of Cochrane’s first two seasons and the World Series in 1935.

It wasn’t called Tiger Stadium at the time, it was Navin Field (and later Briggs Stadium, after the Briggs ownership family), but yes, the interior of the old ballpark was green. The facades, the bleachers, the box seats, every chair, and every counter top was green in the ballpark until the mid-1970s. That’s when the team decided to paint it blue, the color it remained until 1999 when it hosted its last major league game. The team never gave an official reason for the paint job, but it was thought to be to help hitters and fielders pick up the baseball better.

You wouldn’t know it considering his 3,007 hits and 399 home runs, but Al Kaline played his career in some sort of pain. Kaline developed acute osteomyelitis when he was a child, which is an infection of the bone or bone marrow. He had it in his foot, and as a result a section of bone was removed from Kaline’s left foot. Despite the condition, Kaline was a superb athlete and he excelled as a youth ballplayer in Maryland. However, because of the deformity after the surgery, Kaline had to learn to run on the side of the heel of his left foot. At various times in his career the pain was tougher to deal with, and Kaline missed several games in several different seasons because of the condition or other injuries. Still, he was one of the best players in baseball in the 1950s and 1960s and was elected to the Baseball Hall of Fame in 1980 in his first year of eligibility.

#7. Detroit was the last team to finish in last place

From 1901 when the American League was formed, the Tigers remained a competitive team for most of the first five decades of the 20th century. While they didn’t win as many pennants as the Yankees, Red Sox, and Athletics, the Tigers usually finished in what was called “the first division” (first, second, third or fourth place). Only four times in the first 51 years did the Tigers finish as low as seventh, but they never wound up a season in last place. The Red Sox, the Indians, and even the Yankees, finished in last place multiple times before Detroit did once.

Finally, in 1952 the Tigers lost 104 games and found themselves at the bottom of the AL standings. It must have seemed as if someone turned the newspaper upside down, it was so unusual for Detroit. Within a few years Al Kaline was in the heart of the lineup and the Tigers never finished last again in the eight-team or ten-team American League. Only later when the league was spliced into two divisions did the Bengals suffer another last place finish, in 1974. They also were last in 1975, and in 1989 in the two-division format.

Baseball’s amateur draft was instituted in 1965 to help level the competitive balance in the game. Undrafted high school and college players were eligible. The Tigers selected catcher Gene Lamont out of Hiawatha High in Kirkland, Illinois with their #1 pick in the first draft. Yes, that Gene Lamont was the first player the Tigers ever selected in the major league draft. Lamont eventually played a total of 87 games in the major leagues, which goes to show you that the MLB Amateur Draft has always been a crap shoot.

The story goes that Detroit first baseman Norm Cash used a corked bat during the 1961 season which resulted in his .361 average, 193 hits, 132 runs batted in, and 41 home runs. The slugger never surpassed those totals again in his career, in fact he never hit higher than .283 again. In a Sports Illustrated article, Cash admitted to using an illegal bat that season in sort of an “aw shucks” admission.

But a corked bat wasn’t the reason Cash had a career year in 1961. His stellar numbers came about for another reason, the same reason several other hitters had big years in ’61 – expansion.

The American League added two teams in 1961, the Los Angeles Angels and Washington Senators. The addition of two more teams and twenty more pitchers watered down the talent level. That season, two Yankees challenged Babe Ruth’s single-season home run record: Mickey Mantle and Roger Maris. Batting averages and home runs soared throughout the league, as they always do when new teams are added. Cash didn’t even see much of a dropoff in power in 1962, he hit 39 home runs that season. The reason he never hit .361 again was probably twofold: pitchers came to dominate in the later 1960s (which eventually prompted MLB to lower the mound) and he didn’t have the confidence while not using a corked bat. Scientists have shown that a corked bat has no impact on the distance a baseball is hit. It’s really just a placebo effect.

#10. Sparky Anderson did not retire

In 1994-95, baseball endured its’ most troubling labor problems. The ’94 season was halted and the World Series cancelled after players went on strike. The following spring owners locked players out of spring training and attempted to use “replacement” players who were willing to cross the picket line. Those players were far inferior to the regular major leaguers and Detroit manager Sparky Anderson wanted nothing to do with them. As the senior member of big league managers, Sparky was the only skipper to refuse to manage the replacements. That decision angered team owner Mike Ilitch, who thought Anderson’s loyalty should have been to the front office. But Sparky sided with the game over the travesty of fielding players who were subpar.

When the labor problem was resolved and the ’95 season began, Sparky was back in the dugout but his days were numbered. With his contract up, he figured the team would negotiate an extension, but that negotiation never came. Instead, Sparky was told he was not coming back, he was fired. The team issued a statement that Sparky was retiring, but most people knew what was really happening.

Still, after his final game managing the Tigers, Sparky wanted very much to manage elsewhere. But officials in baseball wouldn’t allow it. His stance against replacement players was seen as an act of disloyalty and no job offers ever came for Anderson, who was only 61 years old when he left the Tigers. Sparky was essentially blackballed from major league baseball.