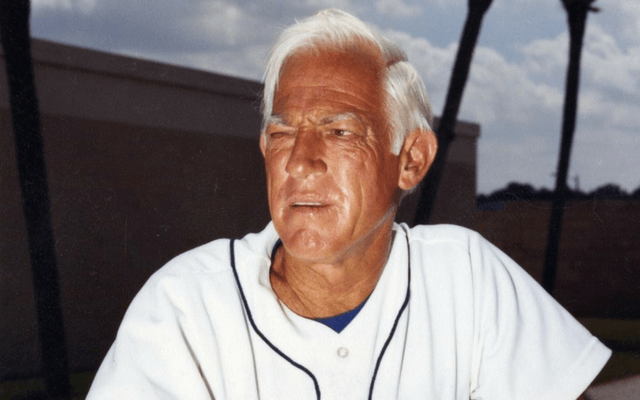 Sparky Anderson managed the Detroit Tigers from 1979 to 1995.

Anyone who ever heard Sparky Anderson talk knows he was not shy in sharing his opinion. You also remember that he was passionate about the game of baseball. We lost Sparky back in 2010. But his words live on and his legacy still lives on in Detroit. Here are 14 quotes from the Hall of Fame manager.

“I only had a high school education and believe me, I had to cheat to get that.”

Born George Lee Anderson to a lower middle class family, Sparky was never much for school. He was a scrappy athlete who spent most of his time playing sports growing up in southern California. We’re not sure what his grades were, but “Georgie” didn’t concern himself with it as he worked his way to the major leagues as an infielder. His lack of formal education didn’t stop him from becoming one of a handful of managers to win more than 2,000 games.

“Babe Ruth is dead and buried in Baltimore but the game is bigger and better than ever.”

This quote came from Sparky in the early 1980s, after a series of labor disputes scarred the reputation of professional baseball. Sparky was always sure to point out that no one was bigger than the game itself, not even the Great Bambino.

“I don’t know why the players make such a big fuss about sitting in the first class section of the plane. Does that mean they’ll get there faster?”

Pretense was lost on Sparky Anderson.

“Munson is an outstanding player and he would hit .300 in the National League, but don’t ever embarrass anybody by comparing him to Johnny Bench.”

This controversial statement was made during the 1976 World Series when Sparky’s Reds faced the Yankees. Thurman Munson was the Yankees great catcher, and he had a fine series. But Sparky’s catcher, Johnny Bench was even better, and Anderson wanted baseball to realize where his player rated. Munson was offended, and the Reds swept the Yankees.

The problem with John Wockenfuss getting on base is that it takes three doubles to score him.”

Anyone who saw John Wockenfuss run knows this one is pretty close to being true.

“You give us the pitching some of these clubs have and no one could touch us, but God has a way of not arranging that, because it’s not as much fun.”

In the 1970s the Cincinnati Reds were dubbed The Big Red Machine, fueled by four legendary players (Johnny Bench, Tony Perez, Joe Morgan, and Pete Rose). The team never boasted great pitching, and Sparky always felt that if he had better arms his Reds’ teams would have been unstoppable.

In 2001 after 9/11, Sparky Anderson visited New York City fire stations to greet the first responders. the son of a house painter, he always felt a connection to the common working man.

“If I ever find a pitcher who has heat, a good curve, and a slider, I might seriously consider marrying him, or at least proposing.”

The best pitchers Sparky ever had were Tom Seaver (briefly), Jack Morris, and Gary Nolan

“I’ve changed my mind about the DH: instead of being bad, it stinks.”

Though he managed 17 seasons in the American League using the designated hitter, and he had several fine DH’s, Sparky never liked the rule.

“Every 24 hours the world turns over on someone who was sitting on top of it.”

Sparky’s wonderful advice to those who get too comfortable with their success.

“If I hear Bowie Kuhn say just once more he’s doing something for the betterment of baseball, I’m going to throw-up.”

In the 1970s, commissioner Bowie Kuhn made a number of controversial decisions, including his insistence of locking out players during a labor dispute. Always a caretaker of the game, Sparky didn’t like it.

“I cannot get rid of the hurt from losing, but after the last out of every loss, I must accept that there will be a tomorrow. In fact, it’s more than there’ll be a tomorrow, it’s that I want there to be a tomorrow. That’s the big difference, I want tomorrow to come.”

For more than a month during the 1989 season, Sparky left the Tigers and returned to his home in California. The official reason was “exhaustion.” The culprit was the collapse of the team and the incessant losing. Sparky never took losing well.

“If we lose this thing, they’re going to string me up on that flag pole in center field.”

The Tigers started the 1984 season by winning 35 of their first 40 games. By May 9 they had a 7 1/2 game lead. They were on the cover of Time magazine. The expectations were sky-high and Sparky realized that if they blew it, it was on him.

The most principled stand Sparky ever took was his refusal to manage replacement players. In 1995 MLB owners announced their intention to field replacement players in place of regular MLB players who were in a labor dispute with them. The replacement players would be undrafted players, non-professionals, or players willing to cross a picket line. The quality of play would obviously be poor. Sparky balked at the plan and was placed on unpaid leave by the Tigers. Owner Mike Ilitch wanted to fire him, but he was talked out of it. After MLB players returned, Sparky managed one final season and was not brought back by the Tigers. He never managed in the big leagues again, effectively blackballed by the game.

4.7
5
2 weeks ago
I sent Vintage Detroit a Tigers jersey to customize, and they did an amazing job. The quality is terrific, their customer service was fantastic, and they were up front and clear about their whole process. If I ever need a Detroit sports jersey customized, they are my number one to return to!
5
3 weeks ago
Talk about an excellent operation. My fiancé and I flew in for the home opener. I had never been to Detroit for a game despite being a lifelong fan. So I needed gear. Specifically I wanted a Datsyuk jersey. Color me shocked when we arrived and were greeted by the nicest lady! They even got the jersey down and stitched while I finished picking out what I wanted. The quality is second to none and I’m beyond happy with all my purchases. Will be ordering some more soon! They made us feel welcome and gave us a lot of pointer on food and traffic -again the nicest people and top tier product that is priced extremely fairly!
5
3 weeks ago
Fantastic customization for Red Wings jerseys, they had it done within 45 minutes and the stitching was fantastic and everything I could’ve hoped for. I highly recommend this place for any jersey customizations or general sports merchandise.
1
3 weeks ago
Very disappointed. I live in Phoenix so I had to order a Detroit bad Boys t shirt, however the basketball was not orange or even close to it, which makes the whole shirt pop. In fact you could barely even tell it was a basketball, it just blended in with the color of the shirt. The picture shows that it is orange. But what really makes me upset is they didn't refund the $10 shipping and I had to pay $7 to ship it back. So I basically flushed $17 because of inaccurate advertising.
5
8 months ago
Fantastic experience! If you’re in the market for anything Detroit sports, do yourself a favor and shop local. These guys are the best. I live up north. Had an old Red Wings Jersey I wanted customized. Sent it down to them and it came back absolutely perfect!

🎁Choose FREE STORE PICK UP at checkout and receive a free gift with your order! Limited quantities available. Dismiss