Tigers opener against an NL team is a first, but they won’t be able to top their first opener 116 years ago 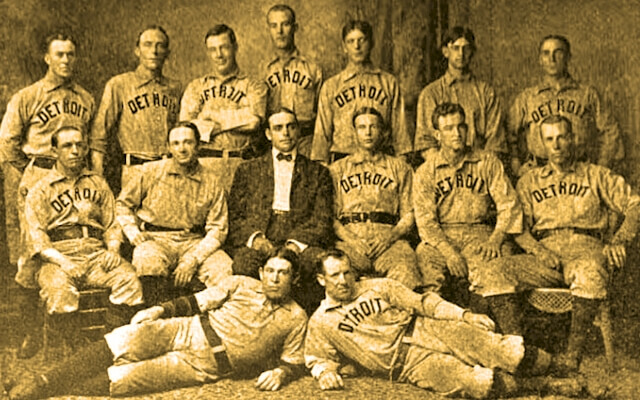 The 1901 Detroit Tigers were led by manager George Stallings, seated in the center in a suit.

When the Detroit Tigers open their 116th season on Tuesday night in Miami, it will be a first in franchise history—starting off the American League season with an interleague game. With the way the Major League Baseball schedule is structured now, it had to happen eventually.

The Tigers played their last spring training game in Lakeland on Friday and then ended the exhibition season by playing Atlanta Saturday at Disney World in Orlando. Then, weirdly, the team traveled south to start the season two days later. It must seem to them like they’re never going to leave Florida—and I’m sure by the time they open the home season against the New York Yankees on Friday, they’ll be glad to be out of the Sunshine State and back into the spring chill of Michigan.

Barring weather postponements, the Tigers and Marlins will be the last two teams to open the 2016 season. It’s a sure bet the Tigers will be at least a half-game out of first place before they even take the field. Hopefully that’s a deficit they’ll manage to overcome.

While Opening Day is universally celebrated as a day of hope, it’s also more truthfully the beginning of failure. In baseball, there’ll always be plenty of bad days ahead to go with the good. No matter how good a team looks on paper, when you start the games that count, every batter on the team is going to start swinging and missing, every pitcher is going to start issuing walks and giving up homers, every fielder is going to start making errors, and every base runner is going to start getting thrown out.

What happens on Opening Day is never predictive of a season’s success. Baseball is an endurance event, and there are 161 more chances to get over that first loss or to dampen down the hope that comes with a first win.

Opening Days in this era can start in March or be delayed till late April, as in the strike season of 1995 when Detroit opened with a game in Anaheim on April 26. They can start for the Tigers on the east coast or the west coast (1993 and 2000 in Oakland) or anywhere in between. This is the first Tiger opener in a National League park—but certainly it won’t be the last.

Looking back through the long history of the franchise, two things stand out about Opening Day. The first is Jack Morris winning five opening day games in six years to start the 1980s. Morris started the first game of the season eleven times for the Tigers, a franchise record.

But nothing will ever top the team’s very first opener, held at Michigan and Trumbull on April 25, 1901. Bennett Park was filled with enthusiastic fans eager to see their hometown team play a major league game after toiling in the minors for five seasons. As was the custom in those days, when the team ran out of seats to sell, they had hundreds of fans stand in the outfield behind ropes.

For two hours, they didn’t have much to cheer about. Their team committed seven errors, a lot even for that era. Coming to bat in the ninth inning, Detroit trailed 13-4. As some of the fans in the grandstands began to leave, those on the field were stuck there, and when Tiger batters started lofting fly balls beyond the ropes for ground-rule doubles, the fans surged forward against the flimsy barriers. And soon it became pretty easy to hit a ball into the fans, and the Tigers began piling up runs.

By sheer force of will and incredible luck, Detroit somehow won that game, 14-13. It has never been and probably never will be surpassed as the greatest comeback in the history of major league baseball. More than 9,000 wins and more than 8,800 losses later, the Tigers head to Miami with the high hopes appropriate to Opening Day. But no matter how strange the venue, the miracle is that Detroit baseball, once again, is back—and if your team can come from nine down in the ninth to win, anything is possible, right?