Bunning trade was one of the worst in Tigers’ history 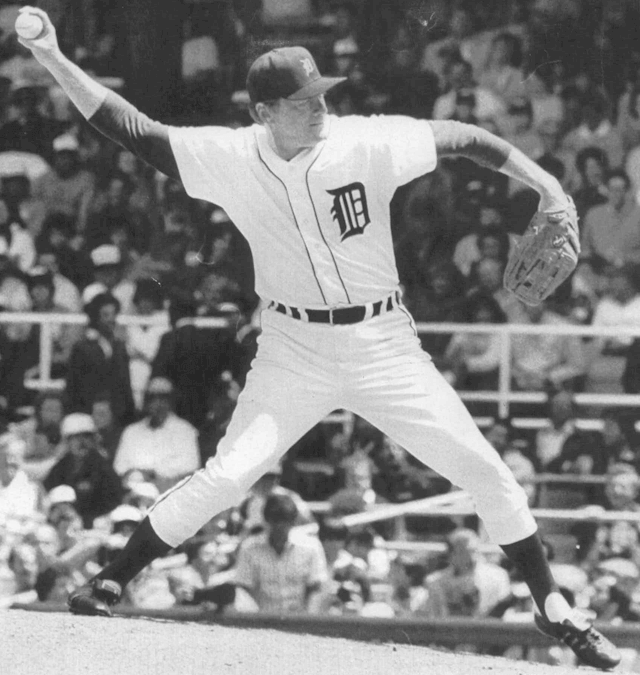 Former Detroit pitcher Jim Bunning pitches during an old-timers game as part of the festivities at the 1983 All-Star Game in Chicago at Comiskey Park.

For one generation of Detroit Tigers fans, Jim Bunning was an ace when the team desperately needed one.

But since he was traded to Philadelphia five years before the Tigers won the 1968 World Series title, Bunning is a forgotten Tiger for all of the ensuing generations of Detroit fans.

Whenever he is mentioned as a Tiger, most fans have one of two reactions:

For a lot of baseball fans, however, Bunning isn’t remembered at all – but there is a lot to remember, especially being a part of one of the worst trades in Tigers history.

First of all, Bunning had a long career as a United States senator, something that is pretty unique to a former baseball player, and should be remembered for its own merit.

But most of all, Bunning was a fantastic pitcher who has gotten lost in the memory of younger fans because he didn’t reach the 300 win or 3,000 strikeout club. Those clubs ensure baseball immortality even more than the Hall of Fame because any time a new member joins the club, everyone already in the club gets mentioned.

Bunning was one of the premier strikeout pitchers of his day, but finished with 2,855 K’s, about a season short of the 3,000 club.

Bunning led the American League in strikeouts in back-to-back seasons with the Tigers, fanning 201 in 1959 on his was to an All-Star season, then matching that 201 total again in 1960.

And this came just two seasons after Bunning won 20 games in his first complete season in the Detroit rotation.

Those four years all add up to a promising start of a long and dominating career in Detroit.

Bunning then won 17 and 19 games the next two years, earning All-Star honors in both seasons — totaling five All-Star appearances in seven full seasons.

But for all his strong pitching in Detroit, he was shipped to Philadelphia in perhaps the most lopsided trade in Tigers history. After the 1963 season, he and catcher Gus Triandos were sent to the Phillies for Don Demeter and Jack Hamilton.

Neither Tigers’ acquisition proved to make any sort of impact. Meanwhile, Bunning went 19-8 in his first season in Philadelphia, earning his first National League All-Star nod. He would win exactly 19 games for the Phils in each of his first three seasons with the club, and in 1967 he finished second in NL Cy Young Award voting when he won 17 games and tossed more than 300 innings.

Had the Bengals had Bunning in 1967 would they have managed that extra win or two they needed to capture the pennant? It’s highly probable.

The tall righthander with the three-quarter-sidearm delivery would go on to win 89 games in six seasons with the Phillies and throw another no-hitter. He struck out more than 200 in four consecutive seasons, including an NL-leading 253 in 1967. Bunning was just as tough on batters in the NL as he had been in his years with the Tigers in the AL.

Had he still beeen in the Detroit rotation in the magical season of ’68, Bunning would have been 36 years old and probably slotted between Denny McLain and Mickey Lolich in the pecking order. Ironically, Bunning had a dismal year in 1968, limping to a 4-14 mark for the Phillies.

Bunning won 224 games in his 17-year career which ran through 1971 and was eventually elected to the Hall of Fame. That should all add up to a memorable career, but for Tigers fans, it was one trade that has nearly erased him from Detroit memory.