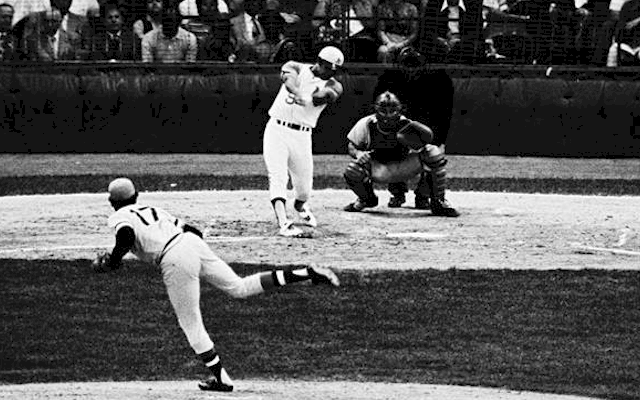 Forty-five years ago on July 13, 1971, Detroit gave the Midsummer Classic one of the best spectacles in All-Star Game history.

The game had everything, including loads of Hall of Famers, great pitching, huge home runs and the end of a streak.

But this All-Star Game is best remembered for one of the most iconic moments in baseball history when Reggie Jackson smashed a towering home run that hit the light tower on the right-field roof at Tiger Stadium, more than 500 feet from home plate.

There had been very few power displays like that drive off Dock Ellis in the third inning in 1971, but even fewer to that point that had been on national television.

It was the first legendary moment in what would turn out to be quite a few for Reggie, but it was just the start at the 1971 All-Star Game.

The legends weren’t through.

Hank Aaron, Roberto Clemente, Johnny Bench and Harmon Killebrew each hit towering home runs, all of which were overshadowed by Jackson’s titanic blast. In fact every run in the game was scored by way of the long ball.

Plenty of other things were overshadowed by Jackson that day, too.

If that weren’t enough, there were other interesting nuggets from that game.

The National League manager was Cincinnati’s Sparky Anderson, who enjoyed his first big moment at Tiger Stadium, despite the loss. It wouldn’t be his last as he eventually became Detroit’s manager, leading the Tigers to the 1984 World Series title.

Tigers’ legend Al Kaline made his mark in the last All-Star Game at his home park, singling in the sixth off of Ferguson Jenkins. He scored when the next batter, Killebrew, launched a pitch into the stands for a two-run home run. “Killer” always enjoyed hitting in Tiger Stadium — in addition to the ASG homer, the big righthander blasted 35 home runs there as a visitor.

Robinson’s home run made him the first player in history to hit a home run for both leagues in the All-Star Game. Clemente’s was special as it ended up being his final All-Star appearance. His homer was tomahawked into center field, a rare blast to the deepest part of Tiger Stadium.

But the most astonishing part of that historic game is that there were 26 Hall of Famers on the field at the corner of Michigan and Trumbull that day.

Tigers legends Bill Freehan and Norm Cash earned starting spots, while Lolich and Kaline entered the game later, to give the home team a great representation.

Of course, no one knew it at the time, but it was the last All-Star Game at Tiger Stadium. With Reggie’s home run, 26 Hall of Famers, six homers by baseball legends, several big moments for Detroit players, it is still tough to top that final All-Star Game at The Corner.

Enjoy the full television broadcast of the 1971 All-Star Game below: