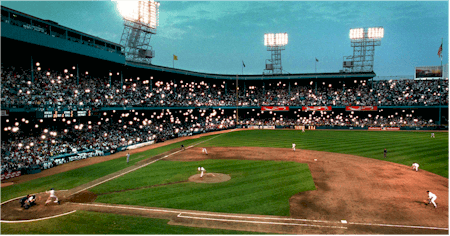 The stands are illuminated with flashes as fans take photos of what they expect to be the final pitch at Tiger Stadium.

This week marks the twentieth anniversary of the final game at Tiger Stadium in Detroit. There are many things that run through my head as I look back on that week and the years I saw games in the old ballpark.

The final game was special, but it only tells part of the story of our love affair with The Corner. The 1999 Tigers were an unspectacular team, a forgettable group of guys who happened to wearing the Old English D. Brian Moehler started for the Tigers, does anyone really remember him? Robert Fick hit the final home, a booming three-run shot in the eighth inning. Is there anything else about Fick worth remembering? The final game, played on an overcast Monday afternoon, wasn’t even a sellout.

I wasn’t planning on going. I attended the Sunday game, the penultimate game at Tiger Stadium, on Sunday. The Tigers won that one too, 6-1. Someone named Dave Borkowski started that game for Detroit. Tony Clark, current MLB Players Association president, batted third, and Gabe Kapler, now manager of the Phillies, hit a home run that day.

I thought that would be my final game at The Corner, but I was urged to call in sick on Monday and drive down to see the finale. I bought tickets on the street, and if I recall correctly they were not very expensive, maybe $35 for bleacher seats. One last time I sat in the upper deck, about 500 feet from home plate. But I didn’t care, I was in the stadium.

The post-game ceremony hit all the right notes. The team trotted out members of the 1935 World Champions, the 1945 champions, and of course the ’68 and ’84 teams. There was Willie Horton, crying in left field. And the impressive Bill Freehan, still regal and chiseled after all those years. Steve Kemp and Jason Thompson were there, two of the 1970s Tigers that shaped my early days rooting for the team. Mark “The Bird” Fidrych bounced onto the field and manicured the mound one last time. Everyone was choked up to see Al Kaline in uniform again, as well as the double play twins, Alan Trammell and Lou Whitaker.

Looking back, I don’t think I bought anything that day. I don’t remember taking any photographs. There were no cell phone cameras. I simply enjoyed the game, happy to be there for history. I guess I didn’t need a memento of the last game because I had memories from all the years before.

What are my memories of Tiger Stadium? Let me share them with you:

There are so many more. Please share your Tiger Stadium memories below in the comments.