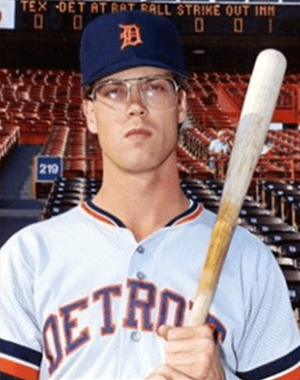 Outfielder Pat Sheridan played for the Detroit Tigers from 1986 to 1989.

Pat Sheridan grew up a Tiger fan, but many of the biggest battles he had in his major league career were against his hometown Tigers, even though he eventually played for Detroit.

Sheridan, who hails from Wayne, and went to Eastern Michigan, was drafted by the Kansas City Royals and signed with them in 1979. He was a part of a dominating American League team in the decade of the 1980s. He wasn’t a star, but he seemed to be in the postseason every year, no matter what team he was playing for.

Tall, slim, and quick on his feet, the lefthanded hitting Sheridan was a prototypical Royal-style outfielder. In his very first professional season out of EMU, he opened eyes with his performance at Fort Myers in Single-A ball. In 1980 he was promoted to Double-A in Jacksonville and hit .323 with 80 runs scored and 22 steals. Unfortunately, his path to the big leagues was blocked by many outfield prospects, as well as Clint Hurdle and Willie Wilson, both of whom were holding down spots in Kansas City.

The Royals were in contention from the late 1970s through the 1980s and won the American League pennant in 1980 before losing the World Series to the Philadelphia Phillies. They also squeaked into the postseason in ’81 by winning the second-half division crown in the strike-shortened campaign. The team was built on speed and relief pitching, stacked around the amazing George Brett, their superstar third baseman.

By 1983, Sheridan was in the majors, fighting for playing time in the outfield corners with Darryl Motley and Butch Davis, as well as veterans Amos Otis and Leon Roberts. He hit seven homers and swiped 12 bases in 109 games for KC in his rookie season. His future was bright.

The Royals returned to the playoffs in 1984 and faced the Tigers. Sheridan went hitless in the series in nine plate appearances. He scored one run, walked three times and struck out three times in three games.

He then helped the Royals make the postseason the very next season and had a bigger impact, slugging two home runs in the 1985 playoffs against Toronto, then having four hits in the World Series against the Cardinals, the first title for Kansas City.

Sheridan then got to achieve his dream of playing for his hometown team, joining the Tigers in 1986.

“I think it’s everybody’s dream to play for your hometown team. I got drafted by the Royals out of Eastern Michigan my junior year,” Sheridan said at the West Michigan Whitecaps Tiger Friday series. “I played there ’81-85 and I came over here and joined Detroit in ’86. I think anytime you can stay in your own home, in your own bed, it’s not like you’re always on a road trip then it’s everybody’s dream going up to be able to play for the Tigers.”

After one year away form the playoffs, Sheridan was back in the postseason, this time for the Tigers as a platoon outfielder.

“The nucleus was still there, we kind of traded away some of the future to get to the World Series which we fell a little bit short because Minnesota ended up beating us,” Sheridan said. “I was fortunate to play with Trammell and Whitaker and Gibby — Darrell Evans, Jack Morris, Matt Nokes. We had a great nucleus of guys and they were still young enough where they were competing.”

The Tigers won the division on the last day of the season and faced Minnesota in the playoffs in 1987. Sheridan hat three hits, including a home run in the series, but the Twins won on their way to winning the World Series.

Sheridan played another year and a half in Detroit before being traded to the San Francisco Giants for outfielder Tracy Jones. And wouldn’t you know, the Giants made the playoffs. Sheridan had two hits against the Cubs in the 1989 playoffs, then went hitless in two at bats in the World Series against the Oakland Athletics in the battle of the Bay. The Giants lost to the A’s, but Sheridan got to play in another World Series.

It wasn’t a long tenure at Tiger Stadium, but Sheridan definitely brought his perpetual playoff magic briefly to his hometown team. And for that, despite not being a star, he is always remembered in the Motor City.