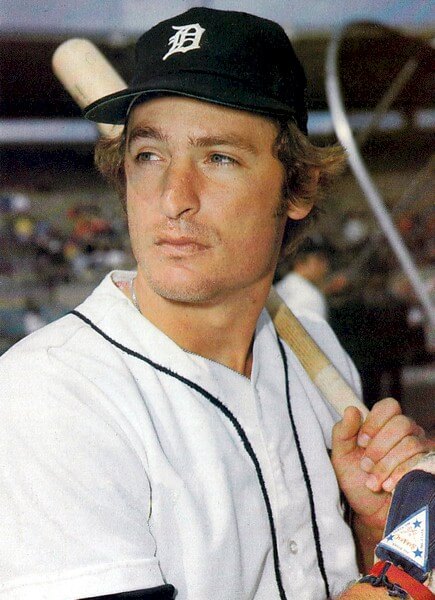 Forty years ago this month the Detroit Tigers were retooling. Coming off what was probably the team’s worst season in history, general manager Jim Campbell shuffled his roster through several big moves. The result was a slew of new faces in Lakeland for spring training in 1976.

One of the new faces was a young non-roster invitee named Jason Thompson, whom the Tigers had chosen in the fourth round of the previous year’s amateur draft. In his college career in Los Angeles at California State University Northridge, Thompson made quite an impression. His left-handed swing blasted several tape-measure home runs for the Matadors. His long blonde hair and broad shoulders made him popular with the beach crowd in sunny Southern California.

With all of his offseason activity to help improve his team, Campbell couldn’t have imagined that a pair of rookies, Thompson and a little-known right-handed pitcher from Massachusetts named Mark Fidrych, would be a large part of a 17-game improvement by the Bengals in the Bicentennial year.

Trades had netted outfielder Rusty Staub, catcher Milt May, starting pitcher Dave Roberts, and relief pitcher Jim Crawford. In addition, Campbell had secured the services of talented outfielder Alex Johnson, a former batting champion. The Tigers, who had aged quickly after their ’72 division title, were now a much different and younger team. Only eight players remained on the 40-man roster from three years earlier as spring training began in 1976.

At Lakeland, Thompson played well, and as Detroit skipper Ralph Houk later admitted, the Tigers probably would have taken the 21-year old north to start the season if they didn’t have so many players they wanted to get a good look at. One of them was Danny Meyer, a promising first baseman who could also play the corner outfield. Meyer began the season as Houk’s starting first baseman, while Thompson was shipped to Triple-A to play for the Evansville Triplets.

When Detroit fans think of 1976 they automatically think of Fidrych, who mesmerized the country with an amazing rookie campaign that culminated in his winning Rookie of the Year honors in the American League. But “The Bird” wasn’t the only freshman who made an impact for Houk and the Bengals in ’76. Thompson got his shot on April 22 when he was recalled from Evansville to replace the slumping Meyer. The tall, strong rookie quickly made his presence felt.

On April 27 he had four hits against the A’s in a game at Tiger Stadium, including the game-winning RBI. Four fays later he launched his first big league home run, a towering drive off Jack Kucek at Comiskey Park in Chicago. He delivered another game-winning RBI the following day in Chicago. For his great debut he was runnerup to Jeff Burroughs of Texas for AL Player of the Week. This all happened weeks before Mark Fidrych had become “The Bird” and established himself as the most popular man in Detroit. Thompson’s skills belied the peach fuzz on his young face.

“He has unusually good bat control for a young player,” manager Houk told The Sporting News, “He will take close pitches that young players usually go after.”

Thompson kept his bat hot for a few weeks and even when he fell into a slump in late May and into June, Houk stuck with him. The Detroit leadership realized that Thompson was the future at first base. He rallied in June, lifting his home run total to 12 at the All-Star break. Like many rookies, Thompson struggled during his second time around the league as pitchers exploited his weakness for offspeed pitches below the waist. He hit .198 with five homers after the All-Star break. But his totals of 17 home runs and 54 runs batted in would have made him a shoo-in as Tiger rookie of the year in most other seasons. Of course fellow rookie Fidrych gobbled up all of the headlines.

Being second fiddle in his rookie season was fine with Thompson, it allowed him to adjust to life in the big leagues without the spotlight and undue expectations. In his second season, Thompson exploded into full star status on his own: slugging 31 home runs and driving in 105 runs as he earned the role of cleanup hitter for the Tigers, hitting directly behind veteran Staub, who served as a mentor. Thompson earned his first All-Star Game selection in 1977, and in August he earned legendary status when he smacked a ball over the roof at Tiger Stadium. Another home run that left the famed ballpark over the right field roof that season earned Thompson the nickname “Rooftop.”

Thompson was an All-Star again in 1978 for the Tigers, hitting 26 homers to go along with 96 RBIs. That gave the left-handed power-hitter 74 homers in his first three seasons in a Tiger uniform, a figure surpassed only by Norm Cash and Rocky Colavito. He declined in 1979 and then in 1980 after getting off to a very slow start, Thompson was traded in mid-season to the California Angels. He went on to Pittsburgh and had a few good seasons, including an All-Star year in 1982 when he hit 31 home runs for the Bucs. Chronic knee injuries curtailed him however, and in 1986 while playing for Montreal, after suffering through two homerless months, Thompson told the Expos he’d had enough and retired in early June. He was only 31 years old. His career ledger showed 208 homers and a fine 804 OPS in 11 seasons. Thompson resides in Auburn Hills, Michigan, where he operates a baseball school that helps high school and college kids reach their goals in the game.