5 reasons the Pistons are in first place 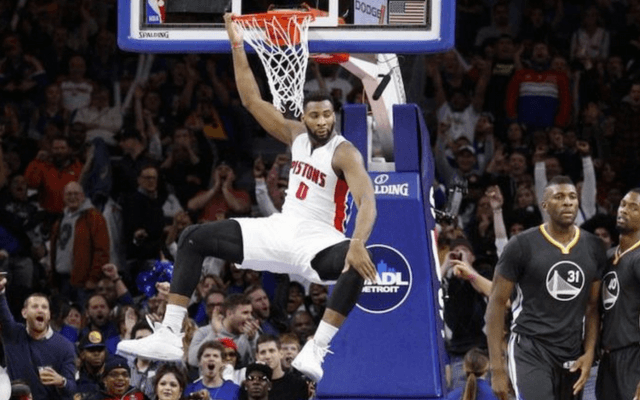 Detroit’s Andre Drummond has helped the Pistons to their best start in more than a decade.

Move over Detroit Lions. The Detroit Pistons (10-3), which are off to their best start since going 15-3 in 2005-06, are the Motor City pro sports franchise with the best shot of winning in the playoffs in the near future.

No, it’s not blasphemous to make such a statement about a franchise that has only made one playoff appearance since the 2009-10 campaign.

Here are five reasons why:

Going into Monday, the only other team that could say that were the James Harden and Chris Paul-led Houston Rockets. It’s quite an impressive stat for the Pistons when you consider that there’s a tad more star power on that Rockets’ squad.

The Pistons’ often-criticized max-contract player is having himself a career season. Through 13 games, he’s shooting a career-high 63.2 percent from the charity stripe. It’s nearly 30 percent higher than his career FT-shooting percentage of 38.9. Is what he’s doing at the line sustainable? Probably not. But it’s still worth mentioning.

Because his stroke from the line has improved, he’s been able to stay on the floor at the end of games and for more minutes per game than ever before.

The big guy logged less than 30 minutes per game last season (29.7), which was the lowest minutes/game mark of his career since logging 20.7 minutes/game during his rookie campaign.

The progress Drummond has made has allowed him to produce a career-best Player Efficiency Rating of 22.9. It’s also made it harder and harder for Pistons fans to continue making fun of him.

Maybe, just maybe, more fans will start proudly wearing his No. 0 jersey and start showing up to Pistons games, too.

The 25-year-old is enjoying a career-best season. He’s averaging a career-high 20.1 points per game on an impressive 48.1 percent shooting from the field and 50.6 percent shooting from 3-point range. His previous single-season career-high mark from downtown was 36.4 percent, which came during his final full season with the Orlando Magic in 2014-15.

In becoming much more of a reliable scorer this season, he’s also taken some of the scoring load off of Drummond and point guard Reggie Jackson.

NBA defenses now have more to plan for when they face the Pistons. Something that should come in handy for Stan Van Gundy’s squad as the season progresses and underachieving teams, like the Cavaliers and Thunder, come into form and begin to gear up for the playoffs.

Avery Bradley has been a difference maker

In the offseason, there was much talk about whether or not the former Celtic would be an upgrade over Kentavious Caldwell-Pope. And guess what, he has been.

Through 11 games with the Lakers, Caldwell-Pope was shooting a career-worst 28.6 percent from behind the arc. Meanwhile, Bradley has knocked down 41.4 of his attempts from 3-point range. If the season ended today, that would be a career-high for Bradley.

KCP’s Player Efficiency Rating has also been nearly a career-worst. Going into Monday, it stood at 10.3, only slightly above his rookie season PER of 9.4.

As for Bradley, it stands at 14.2, which is only slightly below his career-high PER of 14.4 from a season ago. Just having Bradley out on the floor makes the Pistons’ offense run more smoothly. Defenses can no longer simply cheat over to the middle to cut off a drive to the rim by Jackson or backup point guard Ish Smith.

Instead, they also have to focus their attention on the perimeter because of the long-distance shot-making ability of Bradley and Harris.

Jackson, like Bradley and Harris, is knocking down 3-pointers on a more consistent basis. He’s shooting a career-best 36.5 percent from downtown.

Jackson’s shooting from inside the three-point line has also improved. He’s shooting a near career-best 44.2 percent from the field. The only season in which Jackson amassed a higher FG percentage came in his second year in the league. That was when he was a member of the Thunder and strictly came off the bench as Russell Westbrook’s backup.

To no surprise, Jackson has also posted a career-best PER of 20.7. And to further exemplify how he’s brought his play to another level, just take a look at the Win Shares total he’s accounted for. According to Basketball-Reference.com, in only 13 games, he’s already recorded 1.4 Win Shares. In nearly 40 more games played last season, he was worth just 1.9 Win Shares.

As much as Pistons fans should believe that their team is capable of winning in the playoffs, they aren’t title contenders. As long as the Cavs have LeBron, they remain the team to beat in the Eastern Conference.

Despite not having Gordon Hayward the rest of the season, the Celtics, led by LeBron’s former teammate Kyrie Irving, also appear to be a more formidable team than Detroit.

However, the Pistons are good enough to win a first-round series in the East. That’s good for something, especially when you consider the fact that the Pistons haven’t advanced past the first round since the 2007-08 season when they lost in the Eastern Conference Finals to the eventual world champion Celtics.

Maybe the Pistons’ hot start gets people to start buying tickets to their games, too.

Lord knows that Little Caesars Arena could use the spike in attendance to get out of the national spotlight for its negative attendance numbers.

Regardless of whether or not attendance picks up at the LCA, though, it’s time to take notice that the Pistons are for real, and are bound to do some damage in the playoffs for the first time in a decade.