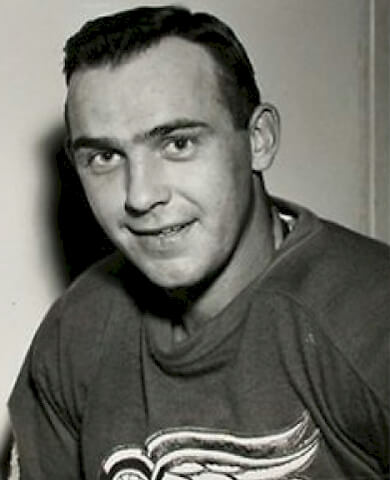 Ab McDonald’s two stints with the Detroit Red Wings didn’t amount to much: 10 goals and 19 assists in 74 games spread over three partial seasons. But as one of the most-traveled players of his generation, the journeyman forward embodied the growth of professional hockey in the 1960s and ‘70s.

Over a 17-year career, McDonald played for four Original Six teams and two expansion franchises before finishing his career in the upstart World Hockey Association. A solid, tireless player, he appeared in more than a thousand regular-season and postseason games in his combined NHL/WHA career and had the unique distinction of being the first captain of a franchise in each league: the Pittsburgh Penguins and the Winnipeg Jets. When he finally quit the game in 1974, McDonald had seen the once-provincial world of the NHL explode to 28 teams in two leagues.

Alvin Brian “Ab” McDonald, a Winnipeg native, starred for St. Catherines in the Ontario Hockey Association and Rochester in the American Hockey League before being called up to Montreal in April 1958 as the powerful Canadiens rolled to their third straight Stanley Cup. The 6-2, 190-pound left winger laced up his skates for two playoff games, then went on to play two full seasons at The Forum, helping Montreal win two more Cups in 1959 and ’60.

The Montreal faithful never warmed to McDonald, who had replaced fan favorite (and future Hall of Famer) Bert Olmstead in the lineup. Ab was traded to Chicago, where he immediately helped the Blackhawks claim their first Stanley Cup in nearly a quarter-century. Remarkably, McDonald had won a Cup in each of his first four seasons in the NHL.

McDonald, a fine checker and penalty killer, was generally thought of as a defensive forward, but he had some pop in his stick. The first two of his five 20-goal seasons came in Chicago, where he was part of the “Scooter Line” with Stan Mikita and Ken Wharram. Last-place Boston, desperate for offense, sent Doug Mohns to Chicago for McDonald in 1964. But Ab was a disappointment during his only season with the Bruins, recording just nine goals in 60 games.

Meanwhile, in Detroit, Sid Abel was overhauling the Red Wings. In a seven-man transaction with Boston, Abel acquired McDonald prior to the 1965-66 campaign. McDonald helped the Wings reach the Finals, where they fell to Montreal in six games. Ab spent most of the following year with the Wings’ top farm club, the Pittsburgh Hornets, where he potted 25 goals and was instrumental in the Hornets winning the 1967 Calder Cup.

A few months later, the Pittsburgh Penguins opened the 1967-68 season as one of the NHL’s six new franchises, doubling the size of the league at a stroke. McDonald was the first player the Penguins picked in the expansion draft and was named captain. He led the team with 22 goals and was second in scoring with 43 points. These numbers were good enough to entice the St. Louis Blues, coached by Scotty Bowman, to trade center Lou Angotti for him. In his first two seasons in St. Louis, McDonald potted 21 and 25 goals, respectively, and was twice named to the All-Star Game as the Blues lost in the Stanley Cup finals each year.

Following the last of his three seasons with St. Louis, McDonald rejoined the Wings organization, splitting the 1971-72 campaign between the AHL club in Norfolk, Virginia and the parent club. That season Ab played the final 19 of his 762 NHL games as a Red Wing, scoring the last two of his 182 NHL goals.

Just as McDonald decided it was time to retire, the WHA opened shop, giving the established NHL a run for its money. Several name players signed with the new league, including several of McDonald’s former teammates, such as Stan Mikita, Gordie Howe, and Bobby Hull. McDonald, a Winnipeg native, had a homecoming, becoming captain of the new Winnipeg Jets.

Led by Hull, Winnipeg won its division and tore through the postseason before falling to New England in the Avco Cup finals. McDonald, the second-oldest Jet at age 36, played in all but one of the team’s 92 regular-season and playoff games. He scored 17 goals, including the franchise’s first-ever on opening night. “Nothing fancy about it,” McDonald said of the historic goal. “I just banged it in.”

McDonald played one last season with the Jets, netting a dozen goals, before finally retiring as a player in 1974. He stayed close to home, briefly coaching in the Manitoba Junior Hockey League, which is where he got his start so many years ago. Today, he and his wife Pat continue to live in the same house they’ve called home for the last half-century. Approaching his 80th birthday, he is still remembered by fans and collectors who pester him to sign a trading card, photograph, or some other piece of memorabilia. Ab doesn’t mind. “When they stop coming around,” he said recently, “they’ve forgotten about you.”