Acting Up: Ty Cobb on Stage and Screen 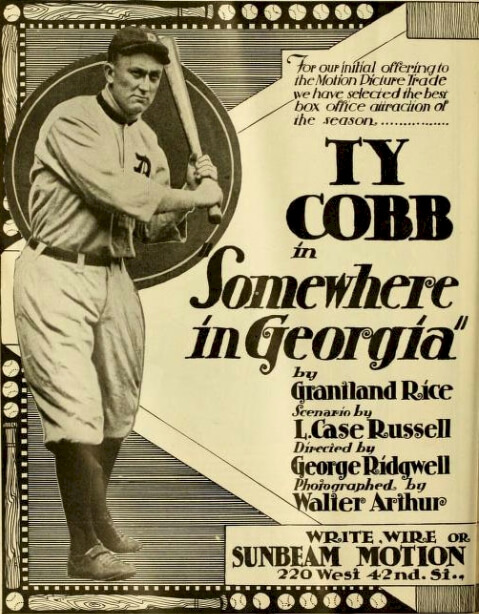 Ty Cobb was a bad actor.

No, I’m not referring to his regular run-ins with authority. I mean, Ty Cobb was a bad actor—in the same way that 50 Cent is a bad actor. Think Vin Diesel in The Chronicles of Riddick. Better yet, don’t.

Like most famous athletes of the time, Cobb took a turn on the vaudeville circuit. During the offseason of 1911-12, he signed a $10,000 contract to star alongside actress Sue MacManamy in a touring comedy called The College Widow. Coming at a time when Cobb was already drawing a hefty $9,000 annual salary from the Tigers, those five figures represented a boatload of bucks for the 25-year-old diamond star.

Cast as a gridiron hero named Billy Bolton, Cobb nearly drowned in flop sweat. However, he gamely delivered such immortal lines as “Marry me and we’ll live happier than any lovebirds” before abruptly quitting halfway through the scheduled three-month run. At the end he was gulping bourbon between the acts to help him get through each performance.

Despite his less than satisfying experience as a stage actor, Cobb five years later became the first professional athlete to star in a commercial motion picture. It was a forgettable two-reeler called Somewhere in Georgia. Like all films in 1916, it was black-and-white and silent, with an accompanist playing appropriately melodramatic music on a piano.

Somewhere in Georgia was shot in New York in two weeks—and looked it. The story, written by sportswriter Grantland Rice, had Ty playing a small-town bank clerk who is signed to a contract by the Detroit Tigers.

Homesick for his girlfriend (played by actress Elsie MacLeod), Ty returns to Georgia, where he is kidnapped by dastardly villains. Not to fear. In true heroic style, Ty escapes, commandeers a mule wagon, and arrives at the ballpark just in time to win the game.

Much to the relief of Detroit fans and noted critic Ward Morehouse, who called the production “absolutely the worst movie I ever saw,” the Georgia Peach didn’t quit his day job.