Is Andre Drummond the best big man defender in the NBA? 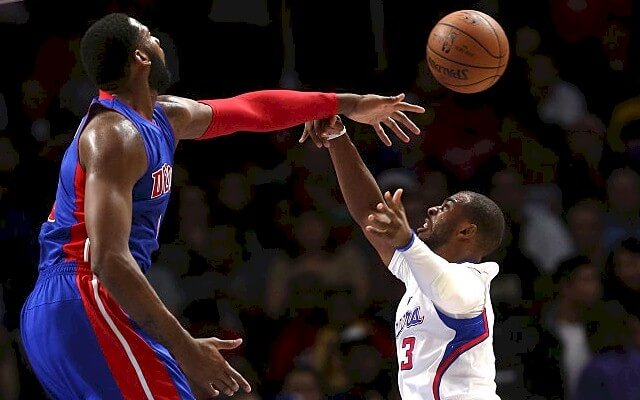 Andre Drummond rejects a shot earlier this season for the Detroit Pistons.

Check off making an All-Star Game on Detroit Pistons center Andre Drummond’s list of accomplishments. The 22-year-old former University of Connecticut big man was named a reserve for this year’s NBA All-Star Game in Toronto.

Yes, it is true that he still struggles to knock down free throws consistently — he missed an NBA single-game record 23 free throws on Jan. 20th against the Houston Rockets — like many centers that have come before him, including four-time NBA champion Shaquille O’Neal and NBA Hall of Famer Wilt Chamberlain, who once scored an NBA-record 100 points in a game but shot less than 50% from the free-throw line six times in his 14-year NBA career.

However, I’m going to stop right there with the negatives about Drummond’s game. Because this piece is meant to reflect on the numbers that have made him an All-Star and allowed him to become the best defensive center in the league.

You only have to look as far as Drummond’s defensive rebound percentage (32.9%) — best in the Association — and defensive win shares (3.5) to get a taste of why he deserves such recognition.

His 3.5 defensive win shares leads all centers and comes in second among all players, trailing only the San Antonio Spurs’ Kawhi Leonard and his total of 3.6.

As of the end of January, the 6’11, imposing rim-protector has also grabbed the most defensive rebounds in the NBA this season with 470, which is 18 more defensive boards than the Los Angeles Clippers’ DeAndre Jordan (452).

When you dive even deeper, you’ll find that Drummond’s 1.7 steals per contest is equivalent to the amount that guards Jimmy Butler of the Chicago Bulls and Rajon Rondo of the Sacramento Kings have recorded thus far this season.

Which is to say that Drummond is far more than just a big man who swats and blocks out defensively.

In case you forgot, the aforementioned Leonard, an ace perimeter defender for the Spurs, was the 2014-15 Defensive Player of the Year, and has a great chance of repeating as the league’s top defender.

But his eye-popping numbers this season for Detroit means that “Dre” can be mentioned in the same conversation as Leonard, which are convincing enough reasons for me to label Drummond as the best defensive center in the league today.

Which is why Drummond’s spot on the Eastern Conference All-Star team is spot on. The “big guy.” as George Blaha calls him, is a blossoming star in the NBA.

Do you guys agree that Drummond is the most dominant center defensively in the game today? Regardless of whether you agree or disagree, let me know the reason(s) for the stance you decide to take in the comments section below.