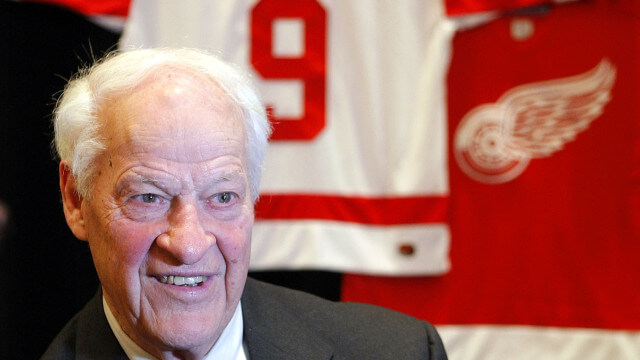 Hall of Fame Detroit Red Wings legend Gordie Howe turns 88 today. He may be a year older, and he might be a bit frail compared to his rough-and-tumble persona on the ice, but Gordie is still “Mr. Hockey.”

On Monday night he was at Joe Louis Arena in Detroit, accepting a cake from the Red Wings to celebrate his birthday. It was Gordie’s first appearance in front of an NHL crowd in quite some time. About 17 months ago, in October of 2014, he had a severe stroke, and shortly after that it was feared that he’d had another. But after some treatment from specialists he made a wonderful recovery. In recent months, his sons Mark and Marty have issued statements that their father was doing well.

It’s been 70 years since Howe made his debut with the Red Wings in 1946 at the age of 18. At that time, the broad-shouldered teenager was an unknown from a little Canadian town called Floral, in Saskatchewan. Floral may as well have been on the moon for all Detroit fans knew. But in short order, Wings fans realized that Howe was a special player. In his second season, Gordie had 44 points in 60 games. When he was 22 he finished third in Hart Memorial Trophy (MVP) voting. The next year he won it for the first of six times. In 16 seasons he finished in teh top five in Hart Memorial Trophy balloting.

Howe was known primarily for three things on the ice:

I suppose you could also say his strength, but stamina pretty much covers that. He was one of the four or five best players in the NHL when he was 20 and he was still in that select group when he was 41. In fact when Howe was 41, during the 1969-70 season, he led the league in games played, nearly averaged a point a game (71 in 76), and he had a plus/minus rating of 23. The man wasn’t human.

Amazingly, a decade later Gordie was still slinging the puck and throwing elbows. He wrapped up his National Hockey League career at the still spry age of 51 in 1979-80 when he had enough in his legs to score 15 goals and assist on 26 more for Hartford. That season he was named to the All-Star Game, which was played at Joe Louis Arena in Detroit. When Gordie skated to the line for pre-game introductions he was bombarded with love and respect: the partisan Red Wing crowd gave him a seven-minute standing ovation.

Howe’s importance goes beyond the rink. His dominance while playing for a team based in the United States helped spread the popularity of the game to this country. Many hockey followers believe that without Howe the game never could have expanded the way it has so successfully into the U.S. market.

Howe’s tenure in Detroit coincided with the glory days of sport in the city. He helped the Wings to eleven Stanley Cup Finals in 25 years wearing the winged wheel. Detroit raised the Cup four times with Gordie. During his heyday, Howe’s Wings were thrilling fans in the city while the Lions were winning titles and Al Kaline was starring for the Tigers at Briggs Stadium. It was an incredible time to root for the Detroit teams.

Just because he wasn’t in “NHL shape” any more, didn’t mean that Mr. Hockey was done playing the game he loved. He continued to lace up his skates for various events and loved to play around with family and old friends. Then, in 1998 at the age of 69, Gordie skated one shift for the Detroit Vipers of the International Hockey League in a game played at The Palace of Auburn Hills. With that appearance, Howe had played hockey in six different decades.

Howe lost his beloved wife Colleen in 2009, the two of them having been married for 56 years. Two of his sons, Mark and Marty, played professional hockey, each playing with their father in the 1970s both with the Houston Aeros and the Hartford Whalers. Mark spent 16 seasons in the WHA and NHL and was elected to the Hockey Hall of Fame, joining his dad.

Howe is a Detroit icon and he’ll soon be an international one too. In 2020 the new international bridge connecting Detroit and Windsor will be named the “Gordie Howe International Bridge.” All they’ll need to do to make it perfect for Gordie is ensure there’s enough elbow room.