When athletes run for office the cheering sometimes stops 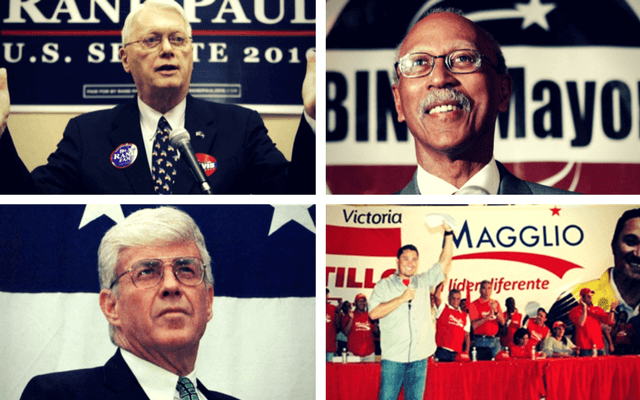 Famously, in the late 1920s, Babe Ruth was asked about the fact that he was earning a larger salary than president Herbert Hoover. “Why shouldn’t I?” Ruth shot back at the reporter, “I had a better year than he did.”

Ruth never ran for president, but if he had he probably could have won in a landslide. Still, he never felt the joy of political victory nor the sting of defeat by the ballot box. Other athletes have, some with great success, others not so much.

Probably the most successful athlete-turned-politician was Bill Bradley, the Hall of Fame small forward who was part of the last New York Knicks team to win the NBA title. Always socially conscious, Bradley went right from the gymnasium to politics, winning a U.S. Senate seat from New Jersey in 1979. The Democrat served three terms as a senator and then ran for his party’s nomination for president in 2000, but failed.

Bradley was a Rhodes Scholar, a highly educated, connected man who thought a lot about public policy even during his playing career. But Walter Johnson never imagined he’d put his name on a ballot when he left Kansas to become a professional ballplayer. Johnson had an amazing gift in his right arm, a tool he used to strike out a record number of hitters in his career. Ty Cobb considered him the toughest pitcher he ever faced. When Johnson retired from the game he was so well respected that he was recruited to run for congress even though he had no desire to hold office. In 1940 he ran for a congressional seat in Marlyand and lost by a 53-47 percent margin. A 400-plus game winner on the mound, Johnson was not well-suited for the world of politics.

“He was an utterly inexperienced speaker,” Speaker of the House Joe Martin later said. “I got some of my boys to write two master speeches for him–one for the farmers of his district and the other for the industrial areas. Alas, he got the two confused. He addressed the farmers on industrial problems, and the businessmen on farm problems.”

Former Detroit and Philadelphia pitching star Jim Bunning didn’t have that problem. He had always been well-spoken and interested in labor issues as a baseball player. The second man to win 100 games in the American and National Leagues, Bunning worked his way up the political ranks, serving first on the city council, then as a state senator, and then as a congressman and U.S. Senator from his home state of Kentucky. A Republican, Bunning made a name for himself as a party leader who fought for conservative values during his more than two decades in D.C.

Another Detroit star found himself in politics as a matter of necessity. After his Hall of Fame career as a guard for the Pistons, Washington Bullets, and Boston Celtics, Dave Bing was a successful Detroit businessman. In 2008 after a scandal swept mayor Kwame Kilpatrick out of office, Bing threw his hat into the ring. At the age of 65 he was elected the mayor of Detroit. The seven-time NBA All-Star had his ups and downs in politics, but critics and supporters alike agreed on one thing — Bing was a gentleman and a squeaky clean politician.

Given the charismatic nature of the quarterback position, you’d think NFL signal callers would propel themselves into politics on a frequent basis. But with a few exceptions, that hasn’t been the case. Jack Kemp had it all: he was handsome, strong, athletic, and magnetic. He played 13 years as a pro quarterback, winning the NFL Most Valuable Player Award with the Buffalo Bills in 1965 whe he led them to the AFL title for a second consecutive season. Off the field, Kemp was a leader too. He founded the AFL Players’ Association and battled for benefits for players. Naturally he transitioned into politics after he hung up his football helmet. It led to nine terms as a U.S. Congressman and a position as Housing Secretary on the George Bush’s cabinet from 1989 to 1993. Three years later he was the vice-presidential nominee for the Republicans under Bob Dole, though the former QB fell short of the end zone: the ticket lost in their efforts to claim the White House.

Football seems to produce the most politicians. Other former NFL players to hold public office include Steve Largent, J.C. Watts, Jack Mildren, Jon Runyan, and Heath Shuler. NBA star Kevin Johnson was elected the mayor of Sacramento, and while rumors have swirled that Charles Barkley might one day run for governor of Alabama, the former “Round Mound of Rebound” never has hit the campaign trail.

Late during the 2016 election, former pitcher Curt Schilling announced that he was forming a committee to explore the possibility of running for governor of Massachusetts.  Schilling, who will probably get elected to the Baseball Hall of Fame one day, has been a lightning rod with his political stances since he retired as a player.

Former Tiger Magglio Ordonez was one of the most well-respected players in baseball during a 15-year career spent with the Chicago White Sox and Detroit Tigers. Maggs was loved by teammates and fans for his great attitude and dedication to the game, so it’s not surprising that he was immensely popular in his native Venezuela. In 2013 he was elected mayor of Juan Antonio Sotillo Municipality. So far, Ordonez hasn’t found politics to be as fun as professional sports. Late in his playing career, Maggs came out in support of Venezuelan president Hugo Chavez, a polarizing figure in the country. As a result, Ordonez was booed by some of his own countrymen when he came to bat for the national team in the World Baseball Classic. Ordronez has also found it difficult to build a consensus as a politician, running into road blocks that have stymied his progressive agenda.

Being a politician may keep an athlete in the spotlight, but the cheering is often matched or exceeded by the jeering.