Ausmus has a chance to prove he’s changed 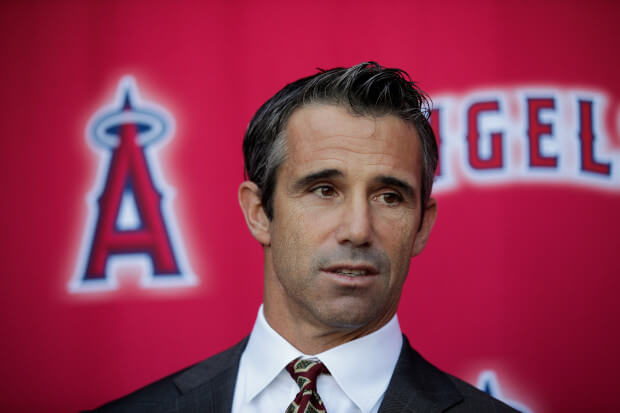 Former Tiger manager Brad Ausmus was introduced as the new manager of the Los Angeles Angels on October 22, 2018.

It was after a game late in September during the 2016 season, at Comerica Park. Brad Ausmus had just saw his team try and fail to keep up with the Indians, the bullpen pouring gasoline on the fire. Ausmus was grouchy, his Tigers slipping in the wild card race. This was their third straight loss, and in each the pitching staff did nothing to stop the bleeding. Two days earlier Francisco Rodriguez had allowed a five-spot in the ninth inning, blowing a save.

Ausmus and the Tigers were facing seven games in seven days as the season came to a fevered finish. He shifted in his chair as the media surrounded him in his office after the latest loss. His face was blanketed with a blank stare. He was asked about a bullpen decision. He was asked about a dropped ball off the glove of his right fielder, J.D. Martinez, a crucial play late in the game that he challenged on the basis of it being fair or foul. He lost the challenge, the game spun out of control.

To say that Brad Ausmus never warmed to the media and the scrutiny that comes with being the front office face of a baseball team, would be an understatement. Like saying Prince Fielder liked nachos. Like saying Donald Trump likes Twitter. As manager of the Tigers, Ausmus never had much use for the guys behind the digital recorders and notepads. His monotone, low-grunt responses and the agitated look on his face made it crystal clear that Ausmus had no respect for people he felt had a lower Baseball IQ than his. The Dartmouth-educated Ausmus was accustomed to being the most clever man in the room, during his playing career The Sporting News once named him one of the ten smartest athletes in sports.

But all the smarts in the world and an Ivy League diploma didn’t get the 2016 Tigers into the playoffs. The following year the team, saddled with injuries and with no help from the vacuum of their farm system, limped along near the bottom of their division. At the September trade deadline they jettisoned franchise ace Justin Verlander, a waving of the white flag. The team and Ausmus quit, losing 24 of 30 games after the trade. At every chance they could, the Detroit media asked Ausmus about his future. His contract was up, the once-mighty Tigers were pussycats. Ausmus shrugged.

“I think they’ve made their decision on my future here,” Ausmus said, not bothering to disguise his disgust at how he’d gone from prodigy to punk in his four seasons in Detroit. With a week-and-a-half left on the schedule, the Tigers in the middle of a nine-game losing streak, the team announced that they would part ways with Ausmus at the end of the season.

On Monday the Los Angeles Angels draped their home jersey over Ausmus, announcing him as their new manager. He follows Mike Scioscia, the most successful manager in franchise history, a respected old school type who spent nearly two decades in Anaheim. The fans are ready to turn the page, ready for a new face and a new approach. Twenty years is a long time for a manager in one place. Most Angel fans are wary of Ausmus, they wonder if a manager who inherited a three-time division winner and presided over its collapse, is the right man for the job. The Angels are stuck on “medium”, having went 80-82 the last two seasons.

The Angels have a lot of question marks, a number of problems. They’re first baseman is a legend, but he hasn’t had a good season in years. Will Ausmus have the guts to take Albert Pujols out of the cleanup spot?

Mike Trout is the greatest player of his generation, and already one of the ten best center fielders to ever step on the diamond. But much of the country only sees his brilliance in morning highlights after late west coast games. Trout has only been able to show off his amazing talent in three playoff games.

The Halos have finished in the middle of the pack in runs scored and pitching in each of the last three seasons. On paper their lineup looks pretty decent, they have the best defensive shortstop baseball has seen since Omar Vizquel, they signed Shohei Ohtani, a two-way Japanese stud who might be able to replace Pujols at cleanup and win 15 games. The Angels also have their “Big Brother” across town, the Dodgers casting a long shadow, having won six straight division titles and the last two NL pennants. Pressure to keep up, or at least get in the picture, is mounting.

The game has changed. The Angels don’t want a disciple of Tommy Lasorda, they crave a manager who will follow a game plan devised by the front office, crafted by analytics. They want a company man. The Dodgers have yes-man Dave Roberts, the Astros have stat-happy A.J. Hinch, the Red Sox have the measured good-guy obedience of Alex Cora. What will Ausmus bring to LA?

At his press conference, Ausmus said all the right things, pointing to his one-year apprenticeship with the Angels front office. “Analytics are part of the game. I had an understanding of analytics before I got here,” Ausmus said on Monday. “If you use the numbers to make the players and the teams better, that’s the important thing. I wanted to find out more about how we can help players on the field be better, how we can make teams win.”

His new employer wanted to hear that, so good for Brad. But does he really believe it? Does he really believe there are other people who know as much or more than he does about the game of baseball? Does Ausmus have the skills to manage the game, the scouting reports, the clubhouse, the dugout, the umpires, his relationship with the front office, and the media? We all know that 18 years crouching behind the plate earned Ausmus the perspective to understand the nuances of how the game is played between the lines. But his handling of the clubhouse, the media, and (his biggest criticism in Detroit) his management of a bullpen, are all in question.

Ausmus finds himself in what few people ever get: a second chance. Did he learn from his time in Detroit? How has he changed and matured? It remains to be seen.