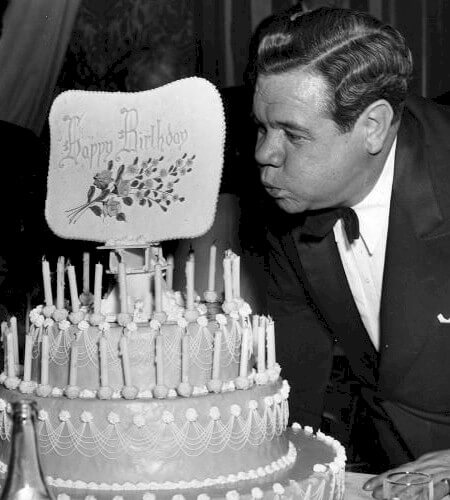 The Babe loved a party. Come out to Nemo’s in Detroit on February 7 for the 29th annual Babe Ruth Birthday Bash. The fun begins at 7:14 PM.

The last time Dave Rozema attended the annual Babe Ruth Birthday Party at Nemo’s, in 2012, he led partygoers on a midnight march to the pitching mound  at Navin Field. There, he threw a pitch to Babe Ruth’s great-grandson, Brent Stephens. “It was dark,” Rozema recalls. “But at least I didn’t hit him.”

Rosie will be making a return visit on February 6, when Tom Derry throws a bash for the Bambino for the twenty-ninth year. As always, there will be free hot dogs, Baby Ruth candy bars, peanuts, and Cracker Jack—and you won’t care if you never get back. Nemo’s will be decorated with balloons, plenty of memorabilia, and some people who can tell you exactly how many wins Ruth had in his pitching career.

Putting on this midwinter fun fest has become a Ruthian undertaking—but so was saving the grounds at Navin Field. Derry is a can-do guy. He brought his mower down to The Corner in May 2010, and cops chased him off and threatened to arrest him, but he just kept coming back, and soon he had helpers. The grounds crew he started has made it possible for baseball fans from everywhere to walk on the field at Michigan and Trumbull, play ball, and even have weddings and birthday parties and memorial services there. “Those guys do an outstanding job,” says Rozema, recalling several times he’s stopped by and pitched there.

If it’s not too cold, Rozema will probably head out there again, once he’s done signing autographs and answering questions at Nemo’s. But this year’s trip may be bittersweet.

Though it’s not clear that the Detroit Police Athletic League has come close to raising the millions they need to make their plan come true, they have the green light from city officials to build their youth stadium, with artificial turf, at the site. And groundbreaking for the controversial project may begin as early as March. The city has just recently taken down the grounds crew’s signs there that opposed the carpet-bombing of the field. Rozema says “they could have done something different with the field, so that people can play on the real dirt and grass.”

Derry, as befitting Babe Ruth’s biggest fan, is nonetheless optimistic, and he and his grounds crew are prepared to keep maintaining the field for a seventh consecutive spring and summer—or as long as they’re allowed to. In fact, throughout this mild winter it hasn’t been uncommon to see people playing catch or pick-up ball there.

No matter what happens once spring arrives, Rozema will be at the Babe Ruth Party and available to sign autographs. And Dave’s the kind of guy who’d sign just about anything you want him to—maybe even a body part! Who knows? After all, this is the man who once overslept and missed the team bus after judging a wet T-shirt contest the previous night, as recounted by Terry Foster in his book 100 Things Tiger Fans Should Know & Do Before They Die.

I can personally attest that Rozema is impulsive—from a memorable evening I spent in his company in Lakeland in 1980. And on May 14, 1982, I was at Tiger Stadium and got to see Rozema charge the mound during a bench-clearing brawl and execute that hilarious kung-fu kick aimed somewhere in the vicinity of Minnesota’s John Castino, ending his season and probably shortening his career. That was the same season when he had to have stitches applied to his rump after falling onto a flask in his back pocket.

I’m not sure whether Rozema will be willing to re-enact either stunt, but I am sure that the fun-loving former Tiger belongs at a party honoring the fun-loving Babe. Rozema recalls how close fans were at Tiger Stadium—“You could get some fans wet just wiping the sweat off your face warming up in the bullpen.” The intimacy was part of the reason Detroit was Ruth’s favorite city to visit for away games—those visits usually including a trip out to Mount Clemens and its mineral baths, known to be favored by certain special ladies.

Irrepressible is the word I’ll pull out to describe both Ruth and Rozema—and Tom Derry too. All three men are also big in stature and heart, and they all know that whether you’re playing baseball or watching it, you should be having a good time. That’s the spirit that infuses the Babe Ruth party every year. Nothing fancy, no pretense—just a night to raise a glass in memory of the man who is still, a century after he played, our nation’s most famous athlete.

Those who want kids to play ball at Michigan and Trumbull would have their biggest ally in the Babe. But why does PAL insist they play on a carpet? You can’t imagine Ruth on a field with artificial turf; in fact, I’m having trouble just putting them in the same sentence.

This year, the party at Nemo’s falls exactly on the date of Babe Ruth’s 121st birthday. It starts at 7:14 p.m., and if you know why that’s the starting time, you are welcome to attend. It’s mandatory you come if you already knew ten paragraphs ago that he won ninety-four games as a pitcher—thirty-four more than Rozema.