Baseball is back at The Corner in Detroit 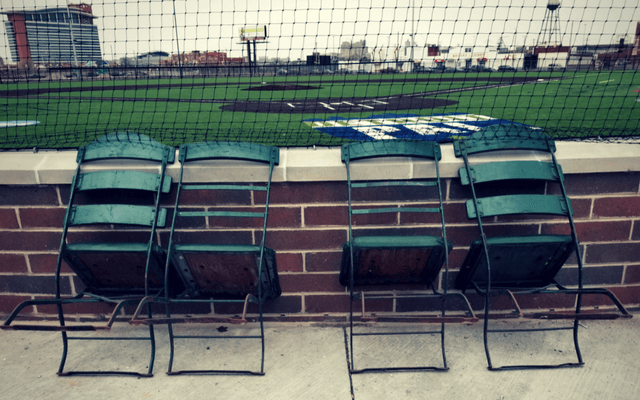 The former site of Tiger Stadium at the corner of Michigan and Trunbull now hosts the field of the Detroit Police Athletic League. The venue will also serve as host to youth games and other sporting events.

Regularly scheduled baseball has returned to the corner of Michigan and Trumbull for the first time since Tiger Stadium closed at the end of the 1999 MLB season.

The former site of Tiger Stadium, which opened in 1912 as Navin Field and had its final remains demolished in 2009, has been transformed into The Corner Ballpark presented by Adient, the first permanent headquarters for the Detroit Police Athletic League.

Detroit PAL is a nonprofit organization which has provided athletic, academic and leadership development programs to roughly 490,000 Detroit kids since 1969, according to Detroit PAL CEO Tim Richey. The organization started its $20 million “Kids at the Corner” campaign for the construction of the ballpark in February of 2015.

Construction on the site, which was previously kept in shape by the volunteer group Navin Field Grounds Crew, began in June of 2016.

The state-of-the art facility, which opened its doors to the public for the first time on March 24, is more than a ballfield. The beautiful complex, through its spacious banquet center, has the ability to host a wide range of events intended to raise revenue for Detroit PAL, including weddings, galas, and corporate events.

Detroit police officers will also eventually have access to the building, according to Richey.

The field — named the Willie Horton Field of Dreams presented by Meijer after Tigers legend and 1968 World Series champion Willie Horton, who grew up in Detroit and spent 14 seasons with the Tigers — is bound to rekindle memories of Tiger Stadium.

“This site has meant so much to so many people, as so many memories were made out here,” Richey said. “I’ve had people tell me that the only time they got along with their dad was at Tiger Stadium.”

He added, “And now, there are kids throughout the city that have the opportunity to grow their own memories at this corner. So, it’s been a really cool marriage of the history of the site and the memories of the site with a future-thinking, state-of-the-art facility that’s going to create memories for kids for generations to come.”

Detroit PAL kept Tiger Stadium’s outfield dimensions in place — including 440 feet to center field — and the stadium’s iconic 125-foot flagpole located in center field. Madison Heights-based Kar’s Nuts Products is the official sponsor of the flagpole, which is in play (just as it was at Tiger Stadium).

It will take Babe Ruth-level power — 60 of Ruth’s 714 career home runs were hit at The Corner, the most of any player that never played for the Tigers — to crank one out to dead center.

You’ll also be able to find some of Tiger Stadium’s green wooden seats in the seating section behind home plate at The Corner Ballpark. The wooden seats graced Tiger Stadium until 1977 when blue and orange plastic seats replaced the iconic wooden ones.

When you first walk into the ballpark, you’ll notice two things: a list of Corner Ballpark sponsors (Adient, Bank of America, Meijer, etc.) on the brick wall to your left and bricks on the ground which are engraved with personalized messages. These messages convey support from individuals, families and companies for Detroit PAL as well as love and affection for Tiger Stadium.

The major difference between the two ballparks is the playing surface. Unlike Tiger Stadium which featured natural grass, Detroit PAL chose to install turf in order to keep the field in pristine shape for the multitude of sporting events that it will host, including youth football and soccer.

Richey believes that The Corner Ballpark, which can accommodate 2,500 people, will serve as a “beacon” to Detroit and its youth.

“This site can be a real shining example (the kids) of how important they are and of how the community cares about them,” Richey said. “We think this is an example for what facilities throughout the city should look like on behalf of kids. This corner will hopefully become a beacon for corners across the city and truly a testament to the kids about what the community thinks about them and how much we care about them and their future.”

Upcoming events at the Willie Horton Field of Dreams include the Great Lakes Intercollegiate Athletic Conference (GLIAC) baseball tournament from May 10-13 and Opening Day for PAL baseball, softball, and T-ball on June 9.

“Hopefully, we’ve got lots of kids that will have a chance to play on this field, and benefit from their experiences of playing on the field,” Richey said. “And hopefully, this site will help PAL to raise its profile and its presence with the community and continue to gain individual donors and people that believe in PAL’s mission to serve kids and develop the character of kids.”

“We’re just trying to gain more donors and more support, so that we can be of service to kids on every corner of Detroit,” Richey said.

Baseball fans in Motown had to wait a heck of a long time for the return of baseball on The Corner. But guess what, after personally touring the masterpiece that is The Corner Ballpark, I can definitively say that it was well worth the wait.

Go check out a game or two this summer, and support a great, worthwhile organization in Detroit PAL.