Where have baseball’s nicknames gone? 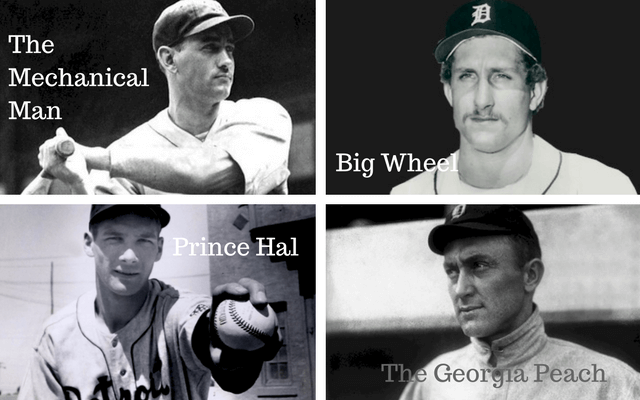 Baseball is a sport full of fantastic nicknames.

The Detroit Tigers have had plenty, too.

The Detroit Tiger nicknames have even spanned groups of players or specific teams. The Tigers were known as the “Tygers” when Ty Cobb was the manager and the “G Men” winning the 1935 World Series with Gehringer, Goslin and Hank “The Hebrew Hammer” Greenberg. In 1945, the Tigers won again behind the T-N-T pitching, which stood for Trucks–Newhouser-Trout.

But where have the nicknames gone?

Since the beginning of baseball, nicknames were a huge part of the sport’s lexicon, especially the way newspaper writers and editors wrote game stories and headlines for nearly the first century of the game.

There haven’t been too many great nicknames for the Tigers since “The Bird.”

Sure there have been ones like “Sweet Lou” Whitaker and Ivan “Pudge” Rodriguez, but that one has been used before. The best of the post Fidrych nicknames is “Big Wheel” for Lance Parrish.

Nicknames have just changed to involving initials or part of names like “J.V.” for Justin Verlander or “V-Mart” for Victor Martinez.

It isn’t just in Detroit, it’s all over baseball. There are fewer nicknames like “Big Papi” and more like “Car-Go” for Carlos Gonzalez.

Maybe the Tigers need more nicknames. There are plenty of stars that deserve a fun nickname to get the kids excited.

Every generation of baseball fans has a group of nicknames that live on. For me, it was “Big Wheel,” “The Hawk,” “The Wizard,” “Donnie Baseball,” “Oil Can,” “Scoop,” and “Doc.”

With “Big Papi” retiring baseball needs more nicknames. Nicknames are a sure way for a player or a team to live forever, even if they only have a short career like “The Bird.”

With two players named Martinez plus a host of Latino stars, there should be an easy way to tie the Tigers together for a new edition of the “G Men” or “T-N-T.”

It could be the first step toward a legendary team.