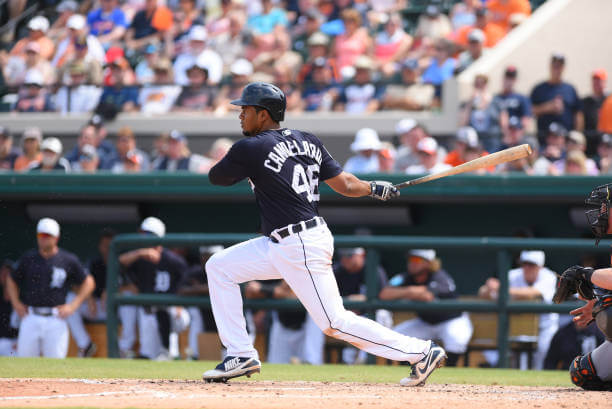 Young third baseman Jeimer Candelario will have a big role for the Detroit Tigers in 2018.

The Tigers will soon be back in Motown, and hopefully, will be bringing along with them some much-needed sunshine and warm weather to Detroit from their spring training home of Lakeland, Florida.

While that is far from a guarantee with the topsy-turvy nature of Michigan weather, two things are definitely certain: the Tigers, predicted to finish 68-94 by PECOTA, have little to no expectations entering Opening Day March 29 vs. the Pittsburgh Pirates, and won’t be very good in 2018.

Leading the Tigers from the dugout this year will be former Minnesota Twins manager Ron Gardenhire.

Gardenhire, who is affectionately known as “Gardy” by fans and pundits alike, won 1,068 games and recorded a .507 winning percentage in 13 seasons with the “Twinkies.” He also won six division titles.

Yet, he might be better known for his lack of playoff success and for his teams bottoming out in his last four seasons in Minnesota.

He got past the first round only once — came during his first season as Twins skipper in 2002 (when his team lost in the ALCS to the eventual World Series champion Anaheim Angels) — and his clubs won no more than 70 games each of his last four years (finishing in last place in the AL Central in three of the four years).

He took time off completely in 2015 and 2016, and then rejoined the coaching ranks in 2017 as the bench coach in Arizona for former Tigers infielder Torey Lovullo.

He made the playoffs in his lone season in the desert, which might be his last visit to the postseason for a while due to the dismal state of the Tigers.

Then, there’s the Tigers’ pitching staff, which, as a whole, doesn’t possess much depth behind ace Michael Fulmer and closer Shane Greene.

Yet, there’s still a chance the Tigers won’t finish in last place in the Central division.

Here’s why: The Royals and White Sox are also expected to stink in 2018.

The Royals lost both center fielder Lorenzo Cain and first baseman Eric Hosmer, Kansas City’s two best players in 2017 to free agency in the offseason, while the White Sox are actively rebuilding, like the Tigers.

Without Cain and Hosmer, the Royals’ lineup only features two bats that can be viewed as potent: catcher Salvador Perez and third baseman Mike Moustakas.

The Royals’ rotation, meanwhile, features only one arm that had an earned run average and fielding independent pitching mark below four last season: left-hander Danny Duffy. That doesn’t bode well for KC, who won the World Series only three seasons ago but now seem sentenced to years of mediocrity as they try to restock the shelves.

On top of that, over the offseason, Kansas City lost four of its five highest used relief arms from a year ago: left-handers Mike Minor and Scott Alexander plus right-handers Peter Moylan and Joakim Soria.

Kansas City has clearly been depleted, and could finish in last place in the Central due to all of its losses.

Then, there’s the White Sox, which had no starting arm that threw at least 70 innings in 2017 finish with an ERA or FIP below four.

Lefty Jose Quintana, the hurler that came the closest to being average, is now pitching on the North Side of Chicago with the Cubs.

Additionally, fellow southpaw Carlos Rodon, one of the starters that the club will rely heavily upon this season, had surgery on his left shoulder at the end of last season, and is unlikely to make his season debut before the start of June.

To start the season, the club’s rotation will be led by aging veteran James Shields, plus inexperienced right-handed arms Lucas Giolito, Reynaldo Lopez and Carson Fulmer.

Shields is a 36-year-old right-hander that has posted an ERA north of five the past two campaigns, while Giolito and Lopez are third-year pros with less than 15 starts to their names and Fulmer has a mere five MLB starts under his belt.

While Giolito, Lopez and Fulmer have all been highly-heralded prospects at one time or another, they can’t all be expected to take the next step in 2018.

All prospects, no matter how highly touted, carry with them a boom-or-bust nature, and none of the three arms above recorded a FIP under 4.75 last year. Also, Chicago’s top pitching prospect Michael Kopech, one of the most highly-touted farmhands in all of baseball, is expected to reach the majors at some point this season, but won’t be breaking spring camp with the big league club.

What should all of this tell you?

Chicago’s rotation should not be expected to be better this season.

Righty Greg Infante is the only returning arm from last year’s White Sox pen that made at least 40 appearances and recorded an FIP below four in 2017.

Chicago general manager Rick Hahn did acquire veteran arms Soria and Luis Avilán this offseason via a three-way trade with the Royals and L.A. Dodgers in an effort to beef up the back-end of his pen.

While Soria proved to be a productive relief arm for K.C. last year, though, it’s important to take into account that Soria was not effective in closing out games. He blew seven out of eight save opportunities.

He could be assigned to close out games for White Sox manager Rick Renteria in 2018, and he last did that on a consistent basis in the first half of 2015 with the Tigers. He saved 23 contests before being dealt to the Pirates prior to the July 31 non-waiver trade deadline.

There’s no guarantee that the 33-year old Soria can be an effective full-time closer at this juncture in his career. If he wins the closer job, he probably won’t have many save opportunities with the White Sox, though, and it’s not just because of Chicago’s lackluster starting arms.

The ChiSox’s lineup will smell up the joint in 2018, too.

And that was with Abreu slugging 33 bombs and with both Abreu and Garcia, once known as “mini Miggy,” hitting above .300. Garcia recorded a career-high .330 batting average, while Abreu hit .304.

There’s no guarantee that Garcia will replicate his success from last year.

Prior to last season, the 26-year-old had never hit above .257 in a season in which he played in at least 120 games. He also had never slugged more than 13 home runs or recorded an on-base plus slugging percentage (OPS) of higher than .692 as a big league regular. If he reverts to his numbers from 2015 and 2016, Chicago’s offense will be in even worse shape than it already is entering Opening Day.

You can argue that the Royals and White Sox will finish in the bottom-half of the AL in rotation and bullpen ERA as well as many offensive categories, including batting average, home runs and OPS.

It could open the door for a third-place finish from the Tigers. It’s as optimistic as I’m willing to be about the club’s chances of being competitive in year one of the Gardy era.

The two-time reigning AL Central champion Cleveland Indians and the Twins, who should be able to make it back to the playoffs as a wild-card team, stand in the way of the Tigers doing any better.

Just like Kansas City and Chicago, Detroit has many glaring voids throughout its pitching staff and lineup. It also has huge question marks when it comes to the productivity it will get out of highly-paid veterans Victor Martinez, Jordan Zimmermann and Cabrera.

If the three of them can stay healthy and bounce back from disappointing 2017 campaigns, the Tigers could outperform expectations, and slide into third place with 75 wins by the end of the season.