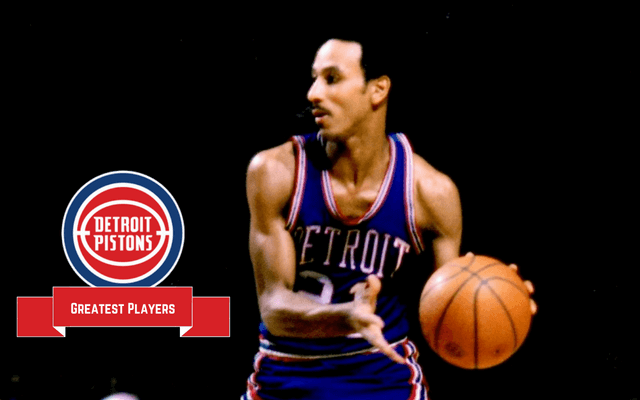 Before becoming mayor of the city of Detroit, this Pistons legend was a masterful scorer in the backcourt.

If current Detroit Mayor Mike Duggan is the name coming to mind for you, you are horribly mistaken.

Duggan, the 75th mayor in Detroit’s 300-plus year history, never played in the NBA. But his predecessor, Dave Bing, did. Bing, a Syracuse University product, played with the Pistons from the 1966-67 NBA season until the 1974-75 campaign. During his time in a Pistons uni, Bing averaged 22.6 points per game, and made six All-Star Game appearances.

One of only three seasons in which he didn’t get selected to the ASG as a Piston came during his rookie campaign, in which he still averaged 20 points per game and 4.5 rebounds per game. With those numbers, Bing was named Rookie of the Year.

The following season, he led the league with 2,142 points. According to NBA.com, Bing became the first guard to lead all of basketball in points scored in 20 years. At the time, the “world-renowned” Max Zaslofsky of the now-defunct Basketball Association of America’s Chicago Stags was the last guard to do it.

Prior to Bing’s explosive rookie season and 27.1 per game scoring average in his second season, the NBA was primarily a big man’s league. Skyscraper centers like Wilt Chamberlain and Bill Russell reigned supreme. Big forwards like Oscar Robertson and Elgin Baylor were dominant in the front court. Most guards were asked to distribute the basketball and play defense. Bing was part of a wave of “little guys” who were just as comfortable shooting the rock as they were dishing the ball.

Bing’s scoring prowess makes it hard to believe that his NBA debut consisted of him going scoreless for the first time in his life.

To further exemplify how impressive it was for him to be a good scorer right away, remember that fellow legendary Pistons guards Chauncey Billups, Joe Dumars, Richard Hamilton and Isiah Thomas failed to average 20 points a game as rookies.

All of those Pistons greats also never recorded as many 20-point campaigns as Bing did.

Bing had seven such seasons, and they all came consecutively, starting with his rookie campaign.

Thomas came the closest to Bing with five seasons in which he recorded at least 20 points a game, all of which also came consecutively.

Billups, by the way, never amassed 20 points a game in any season.

Bing has another leg up on the backcourt starters that respectively made up Detroit’s three championship squads (Dumars and Thomas won in 1989 and 1990, while Billups and Hamilton won in 2004).

In fact, he’s the only Detroit player who is in the top five in all four categories.

His great numbers with the Pistons made it an easy decision for the franchise to retire his No. 21 jersey in 1991. His outstanding career in Motown also led to his inclusion on the NBA’s 50th Anniversary All-Time Team in 1996.

Despite all of these achievements, Bing never won an NBA championship, let alone a first-round playoff series, in Motown. And when Bing, a native of Washington, D.C., was traded to his hometown Washington Bullets before the start of the 1975-76 campaign, he fell short once again in his pursuit of a title.

The lack of playoff success from Bing, the founder of the now-defunct Bing Steel, puts him a shade below Thomas and Dumars in the conversation of the best guards to ever lace up the sneakers for the Pistons.

However, it shouldn’t cause Bing to be placed below Billups and Rip in the same conversation. Bing’s all-around offensive game was better than both Billups’s and Rip’s.

Additionally, you can argue that Bing was the better defender. In his nine seasons with the Pistons, he averaged 1.4 steals a game.

In contrast, Billups averaged one swipe per game in Motown, while Hamilton averaged less than one (0.9).

It serves as another reason — no matter how big of one you determine it to be — for why Bing should strongly be considered the third-best guard in Pistons franchise history.

And even if you don’t believe that, there’s no doubt that he should be recognized as one of the greatest Pistons of all-time.