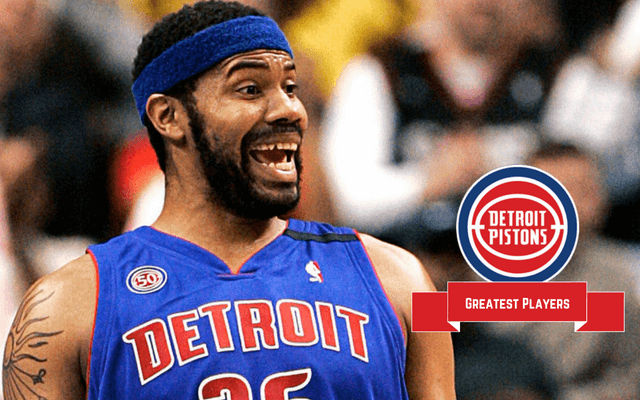 Rasheed Wallace averaged 13 points and seven rebounds per game in his six seasons with the Pistons.

Zeljko Rebraca, Bob Sura, Chucky Atkins and Lindsey Hunter. What do they all have in common aside from being former Pistons?

If you didn’t know already — and if you didn’t, please use it as a trivia question because it’d be a great one — they were all pieces used by then-Pistons front office boss Joe Dumars to orchestrate one of the best trades in franchise history.

That trade brought the Pistons the one and only Rasheed Wallace, one of the most lovable personalities in franchise history.

Wallace, who was already a two-time All-Star at the time he became a Piston after spending his rookie campaign with Washington and seven and a half seasons in Portland, proved to be the perfect offensive complement to Ben Wallace’s strong rim-protecting ability.

After acquiring “Sheed” from the Atlanta Hawks, a team he played a single game for, at the 2004 NBA trade deadline, Dumars said “[this] gives us a real shot to compete at the highest level in the NBA right now.”

Dumars wasn’t lying. The acquisition of “the other Wallace” propelled the Pistons to their first NBA Finals appearance and NBA championship since the 1989-90 campaign when Dumars was still suiting up on a nightly basis with his “Bad Boy” friends.

Rasheed also brought a serious dose of swagger that captivated sell-out crowds on a consistent basis at the Palace.

Beyond offensive numbers, it’s fair to say that he helped strengthen the belief his teammates and Detroit fans had in the Pistons being able to beat a superstar-laden Los Angeles Lakers squad in the ’04 NBA Finals.

Prognosticators across the board picked the Lakers, led by Kobe Bryant and Shaquille O’Neal, to easily defeat the Pistons in four or five games. It was supposed to be a mismatch.

What many of those pundits forgot, though, was the extreme confidence that the quartet of Chauncey Billups, Richard Hamilton and the Wallace duo carried with them.

Another factor that was easily forgotten was Sheed’s experience playing against the Lakers, including in the 1999-00 Western Conference Finals. The Lakers won that series in seven games, but Sheed hadn’t forgotten that Shaq shredded the interior of the Blazers’ defense in Game One for 41 points. He also hadn’t forgotten that his game-high 30 points in Game Seven went for nothing.

Armed with Rasheed, the Pistons, without anyone noticing, were in prime position to pull off the upset, which they did in rather convincing fashion in five games.

Sheed had another way of impacting a basketball game, too: with his mouth. Unfortunately that confident swagger and chatter didn’t sit well with the referees. Instead, his braggadocios ways led to a dangerously high propensity of Sheed striking up conversations with refs — not about the weather outside or how their evenings were going — and getting “T’d” up subsequently.

If you thought Saginaw native and Michigan State product Draymond Green had a bad relationship with officials, take a look at this: during the 2000-01 season when Sheed was with the Blazers, he set a single-season NBA record for technical fouls with 41. In contrast, Green led the league last season with 21 “T’s.”

It got even worse for Sheed at one point, too. He was suspended seven games in 2003 when he was with the Blazers for threatening an official after a game against the Memphis Grizzlies.

According to a story filed back in ’03 by NBA reporter David Aldridge, about an hour after the game, Wallace, who was T’d up during the contest by former ref Tim Donaghy, was minding his own business signing autographs when Donaghy and two of the other officials walked by. According to Aldridge, Wallace yelled in the direction of Donaghy, “That was a bull—- call and technical, and I’m gonna get my money back.” And supposedly, he followed that up by threatening to beat up Donaghy.

If that doesn’t spell crazy and actually, not just crazy, but bat—- crazy to you, then, I don’t know what will.

This is a guy who would yell out “Ball Don’t Lie!” whenever a player from the opposition would go to the free-throw line and miss after he had committed a foul which Sheed thought was unwarranted.

These antics made him popular with a large sect of Detroiters and NBA fans.

Yet, Wallace’s on-court antics didn’t always lead to success in Detroit. They sometimes led to critical defensive lapses. You only have to fast forward from 2004 to the following season’s Finals matchup between the Pistons and San Antonio Spurs to find a great example.

The Pistons lost the series in seven games, missing a chance to repeat as champions. And for many, it’s because of a glaring defensive error made by Sheed in Game Five.

The series was tied at two going into Game Five, with each previous game being a blowout. But in Game Five at The Palace, the two teams battled to overtime.

In the waning seconds of OT, Wallace made his biggest mistake as a pro: he left Robert Horry, a man known for making big shots in crunch time, open for a 3-point attempt from 25 feet that gave the Spurs the victory. Horry was left open after Sheed decided to double Manu Ginobili off an in-bounds pass.

Sheed will never live that crucial play down. With the following two games having to be played in San Antonio, Game Five was critical for Detroit’s chances to win another title. In a series where home-court advantage meant so much (each of the first four games was won by the home team in blowout fashion), winning Game Five basically clinched the series for the Spurs.

But in the Pistons’ run to the Finals in ’04, Sheed made no such blunder.

Matched up with the No. 1 seed, the Indiana Pacers, in the ’04 Eastern Conference Finals, the Pistons, who were the No. 3 seed, lost Game One. It prompted the bold and boisterous Wallace to react, producing an unforgettable soundbite.

He guaranteed victory before Game Two against the then-Eastern Conference favorites which were led by NBA vets Jermaine O’Neal and Reggie Miller, an NBA Hall of Famer.

The Pistons went on to win the game and the series, only losing one more game versus the Pacers and two total games the rest of the postseason.

The legend of the Guaransheed was born, and Wallace became the go-to interview for media covering the Pistons during this time.

Rasheed didn’t consistently produce the lavish scoring totals that Billups and “Rip” did  on that team, nor did he tally the dominant rebounding totals that “Big Ben” did. However, Sheed, who averaged 13.4 points per game during his five and a half seasons as a Piston, did make two additional All-Star teams while in Motown, and was a member of the last five Detroit teams that made the conference finals every year from 2002-03 until 2007-08.

Rasheed Wallace’s impact on those Pistons teams was bigger than the numbers. He was a prolific trash talker who brought swag to Detroit, and who proved to be the missing piece to the puzzle during the 2003-04 title run. That’s why he will go down as one of the most iconic Pistons of all-time.