Hull was a legend before he came to Hockeytown 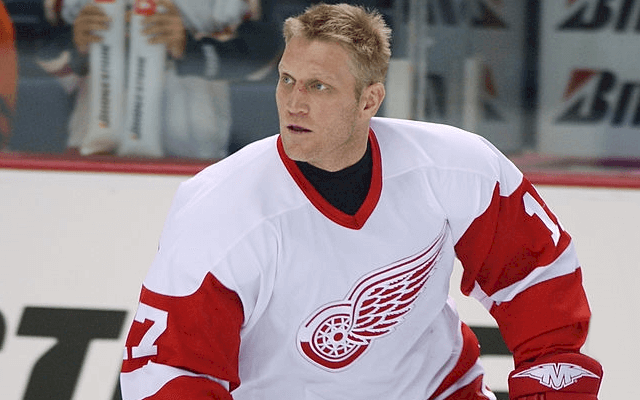 The National Hockey League released its top 100 players in league history at January’s All-Star festivities, commemorating the 100th year of the NHL. There were 28 players who played at least part of their careers in Detroit on the list of 100. Today: Brett Hull.

Brett Hull was one of the purest goal-scoring machines the sport of hockey has ever seen. He was a Hart Trophy winner, a Stanley Cup champion and a 500-goal scorer in the NHL — all before he put on a Detroit Red Wings jersey.

But it was the way he finished his career in Hockeytown (though he played five games for Phoenix afterward) that cemented his legacy as one of the greatest players in NHL history.

The son of hockey legend Bobby Hull, Brett came into the NHL with a lot of expectations in 1986 despite being drafted by Calgary in the sixth round. The name came with a certain swagger, and Hull quickly picked up that swagger.

He was the 117th pick in the 1984 draft and played less than a full season with the Flames before being traded to the St. Louis Blues with Steve Bozek for Rob Ramage and Rick Wamsley. It was likely the greatest trade in the history of the Blues franchise.

Hull scored six goals in his first 13 games with the Blues to conclude the 1987-8 season. His first full season in St. Louis, he scored 41 goals

Hull was only getting started.

What followed was a five-year stretch that few players have ever matched in the history of the sport.

Hull played all 80 games in 1989-90 for the first time. He scored a league-leading 72 goals and added 41 assists for 113 points — his first 100-point season. He also led the league with 27 power-play goals and 12 game-winning goals. He made his first All-Star team and finished third in the Hart Trophy voting for NHL MVP and won the Lady Byng Trophy as the player who exemplified the best sportsmanship.

But it was 1990-91 that was by far his best season. Hull scored a league-leading 86 goals, the highest of his career, and tallied 45 assists, which tied for his highest total, giving him 131 points. He led the league again with 11 game-winning goals and 29 power-play goals. This time, he won the Hart Trophy and the Pearson award, as the top player voted by the players themselves.

Hull scored 70 goals to lead the league the following year, then totaled 54 and 57 goals after that.

After a remarkable tenure with the Blues, which included 527 goals, he signed with the Dallas Stars in 1998.

He played three years in Dallas and scored 95 goals, but none was bigger than the final goal of his first year – an overtime winner in Game 7 of the Stanley Cup Finals against Buffalo. That is a scenario that every hockey player dreams about, but no one gets the chance to live. But Hull did, and it was one of the most iconic goals in NHL history.

That could have cemented his legacy right there, and it did for the most part, but Hull continued to play, and as age began to become a factor, naturally he slowed down a bit.

After three years in Dallas, he signed with the Red Wings in 2001.

Just like in Dallas, when he came to Detroit, he was the boost the team needed and led the Red Wings to the Stanley Cup championship, his second and final title.

That season, Hull scored 30 goals for the Red Wings during the regular season — but again stepped up when it counted the most. He played in all 23 playoff games for Detroit that season and scored a team (and league-leading) 10 playoff goals — including two short-handed.

He would score three more playoff goals for Detroit in his final season with the Wings, retiring with 103 career playoff goals — which is fourth all-time, trailing just Wayne Gretzty (122), Mark Messier (109) and Jari Kurri (106). Each of those players played on the Edmonton Oilers dynasty of the 1980s, then returned to the finals with another team — reaching the finals at least six times. Hull did that reaching the finals just twice.

He was one of the best in history, but his legacy was sealed when he proved he could lead the Red Wings to the Stanley Cup, and at the age of 37, still be the goal-scoring machine that made him a legend.