Bye week only postpones tough times ahead for Lions 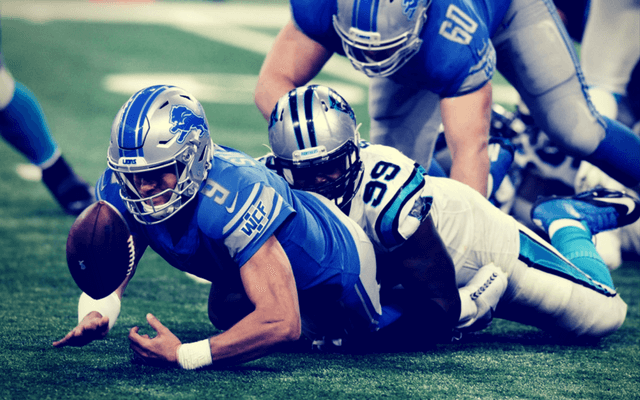 Matt Stafford has been pressured a lot already in the 2017 NFL season.

The Detroit Lions, riding high just two short weeks ago, are in trouble going into their bye week.

Jim Caldwell’s squad has fallen to 3-3 after being obliterated on the road by Drew Brees and the New Orleans Saints, 52-38.

Lions QB Matthew Stafford, the highest paid player in league history, was visibly bothered all game long by a problematic right ankle. It led many on Twitter to question Caldwell’s decision to leave him in the game once the Saints took a 45-10 lead with 8:34 left in the third quarter after Stafford’s first of three interceptions.

It was, by far, Stafford’s worst start of the season. He completed less than 50 percent of his passes (25-of-52 passing), and recorded a less-than-appetizing QB rating of 62.3.

And to further accentuate how ugly Stafford’s performance was, just take a look at his “Total QBR” vs. the Saints, ESPN’s trendy stat for evaluating the efficiency of quarterbacks.

Based on Total QBR, he didn’t even come close to having an average week under center.

An average week would have been recording a rating around 50.

Stafford’s single-game rating also translates to the Georgia product having given the Lions only a 23.2 percent chance to beat the Saints.

Stafford’s play was so bad that less heralded passers, like the Jets’ Josh McCown, 49ers rookie C.J. Beathard, the Bucs’ Ryan Fitzpatrick, the Vikings’ Case Keenum and Bears rookie Mitchell Trubisky, all provided their respective teams with better chances to win in Wk. 6.

That’s simply unacceptable play from your franchise passer, and a lot of the blame falls upon the offensive line for allowing five sacks.

But Caldwell and Jim Bob Cooter, the Lions’ offensive coordinator, definitely deserve a fair share of the blame, too.

Caldwell and Cooter should’ve been able to tell that Stafford didn’t have his best “fastball” and wasn’t himself.

It was noticeable right away, too. He fumbled in his own end zone at the beginning of the game, and then fumbled again in the first half.

And his struggles only became more devastating to Detroit in the second half. Two of his interceptions were returned for touchdowns, and in total, four of his five turnovers resulted in touchdowns.

Because Stafford clearly didn’t have it, Lions backup QB Jake Rudock, who was warming up at one point in the third quarter, should’ve been inserted.

Anyways, would it really have been worth it to get Stafford further hurt during a game that was one-sided for the most part?

The answer should be a resounding “No!”

Going into the fourth quarter, the injury bug had already struck the Lions far more than they would’ve liked.

Star wideout Golden Tate and playmaking safety Glover Quin left in the third due to injury, and didn’t return.

Right tackle Rick Wagner also exited in the third, but did return later in the game.

If the Lions needed another reason to pull Stafford Sunday, all they had to do was look at what happened to the star QB of their NFC North rival Green Bay Packers.

Aaron Rodgers, the two-time NFL MVP and Super Bowl champ, suffered a broken collarbone on his fourth pass against the Minnesota Vikings, likely ending his season.

The Lions should’ve been put on notice that a similar injury could happen to their star passer, and bring an end to their playoff hopes prematurely (as is likely the case with the Pack).

The NFC North is now wide open, and it could be the Lions to take. But they will need a healthy Stafford the rest of the way in order for that to happen.

No offense to Rudock, but he’s not leading Caldwell & Co. to the playoffs this season.

The Lions also need Tate and Quin plus T.J. Lang, who sat out the game with a bad back, to get healthy during the bye.

As the season progresses, the Lions can’t afford to take the same risks with Stafford that they did Sunday.

After the bye, they play the Pittsburgh Steelers and the Rodgers-less Packers in back-to-back weeks, two teams they’ve struggled against historically.

And while things could change before the Lions host the Steelers on Sunday Night Football in Week 8, Pittsburgh is feeling good at 4-2 atop the AFC North. It just handed the Kansas City Chiefs their first loss of the season, while limiting the high-octane Chiefs to a season-low 13 points and a season-low 251 total yards of offense.

The Steelers also sacked Chiefs QB Alex Smith three times, which could spell a long day for Stafford with the leaky O-line that he has protecting him.

Over the last three weeks, Stafford has been sacked a total of 17 times.

Outside of beating the hapless N.Y. Giants on Monday Night Football in Week 2, the Lions haven’t fared very well in prime time in recent memory, either.

Before that MNF victory over the Giants, the Lions hadn’t won a regular season prime time game since Week 15 of 2015 against the Saints.

And since 2015, Detroit’s record in prime time contests has been a paltry 2-5.

I think you can tell where I’m going with this: I’m not liking Detroit’s chances against Ben Roethlisberger and the Steelers.

Big Ben should be able to lead the Steelers to victory, which would make the Lions losers of three in a row.

It would also drop the Lions to under-.500 for the first time this season.

And they would be reeling going into a MNF contest the following week with the Pack at Lambeau Field.

There’s no doubt that the Lions have a better chance to beat Green Bay with former UCLA QB Brett Hundley under center for the Pack instead of Rodgers.

And they have lost to a Green Bay team quarterbacked by a backup before. It came in Week 17 of the 2011 season at Lambeau. The name of the Packers’ QB that day: Matt Flynn. He threw for six touchdowns and 480 yards. Nothing is a given when the Lions play at the home of the “Cheeseheads.”

The Lions are already in trouble, and will be in even more trouble by falling to Hundley and the Pack in Wk. 9.

And unless the Lions shore up their O-line and get Quin and Tate back at full health, falling to 3-5 exists as a distinct possibility.