Are Cabrera and Martinez the best batting duo in Tigers’ history? 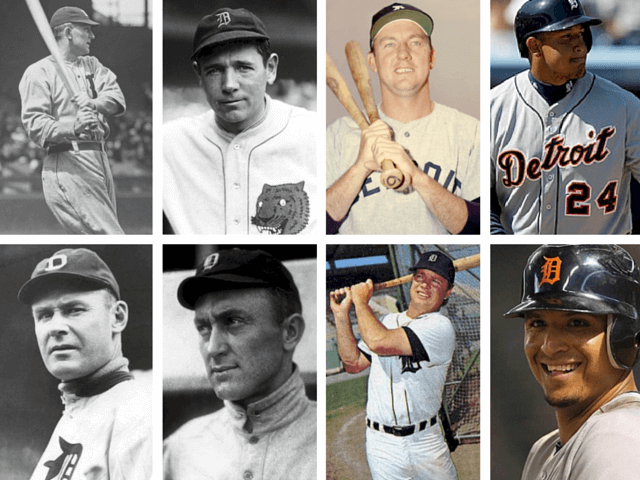 When the Tigers originally signed Victor Martinez as a free agent the decision was applauded. The team was getting one of the best pure hitters in baseball, a switch-hitter to fit nicely into the middle of their lineup.

Six years later the move looks as wise as it did at the time in 2011. VMart has been one of the best designated hitters in the game and his arrival coincided with four straight division titles for Detroit.

Once again in 2016, Martinez has his average fluttering around his customary .300 and his power stroke has returned — he’s on pace for 25-30 home runs.

Miguel Cabrera hits directly in front of Victor and he’s healthy and hitting well again after a brief slump in early July. Miggy is also hitting near or above .300 and he’s on pace for 30+ homers and 100 runs batted in.

That got me to thinking: where do the two current Tiger hitting stars rate in Tiger history?

The Bengals have a storied history of great hitting. No other team has won more batting titles and a quick glance at Detroit’s franchise batting leaderboard reveals a roster of great hitters who’ve put up amazing numbers wearing the Old English D.

The Tigers have 22 players who hit .300 or higher in their careers in Detroit, including Miggy and VMart. Nine players have scored 1,000 runs as a Tiger, and seven Tigers have at least 2,300 hits for the franchise. Ten Detroit batters have 1,000 RBIs, and Miggy will soon make that number eleven. Bill Freehan hit 200 home runs for Detroit but he ranks only tenth in that category among Tigers. With ten more homers in 2016, Cabrera will become Detroit’s fourth member of the 300-home run club, joining Al Kaline, Norm Cash, and Hank Greenberg.

Here’s a look at the best hitting duos in Detroit history, factoring in longevity, performance, honors, and success as a team.

They didn’t particularly like each other, but Cobb and Crawford were both natural ballplayers with great instincts. Of the duos listed here, Ty and Sam were the best baserunners and wreaked the most havoc on the base paths.

At various times in their 13 years together, Cobb hit before Sam and at other times he was hitting behind him. During their most effective stretch, Sam was behind Ty, protecting him and working with him on hit-and-run plays. The two teammates used a series of hand signals to run plays. A favorite maneuver was to have Cobb take off for second, Crawford slapping the ball through the vacant hole. Simple hit-and-run, right? No, Cobb would continue to barrel around third and force the defense to choose between throwing the ball home or going after Crawford as he bolted for second. The teammates were both adept at getting in and out of rundown plays.

Crawford hit for more power, leading the league in triples six times. In that era it didn’t make sense to swing for the fences — they were too far away. Plus the baseball was deader than a wet sack of towels. Baseball was a station-to-station battle of wits. The smart ballplayer, who played “inside baseball” was the most valuable.

Cobb won the first AL MVP Award and was the best player in baseball. Both players are in the Baseball Hall of Fame, and as Tigers they helped lead the team to three straight pennants.

In the second half of his career, Cobb teamed with another great right fielder. Unlike Crawford, Heilmann was a righthanded hitter who hit for high average. Heilmann listened to Cobb’s advice and became a better hitter under his tutelage. Harry won four batting titles in the 1920s, all but one of them as a teammate of Ty.

One strike against this duo is the fact that they never got the Tigers to the postseason.

This duo spent 14 seasons together, the longest stretch for any on this list. Like Heilmann/Cobb, Kaline and Cash are a righty/lefty combo.

Kaline was a line-drive hitter who happened to hit 15-25 homers per season, but the longball was not his game. Sort of like Victor Martinez today. But Cash had a lot of raw power, he blasted 30+ homers in a season five times, topping out at 41 in his monster season of 1961. That year, Kaline and Cash combined for 60 homers, 215 RBIs, 235 runs, and a .343 average. No wonder the Bengals won 101 games and challenged the mighty Yankees for the pennant.

In their stretch together, the duo hit 647 home runs, the highest total for any Tiger teammates by far. In 1968 they helped the team to the World Series title, Cash having a fine year but Kaline suffering through an injury-marred regular season. But in the Fall Classic, Kaline led all batters and had several key hits.

For longevity and production, this duo has to rank near Cobb & Crawford.

Thus far Cabrera and Martinez have played together for five seasons including 2016 (Victor missed all of 2012 with an injury). The duo have helped lead the team to the playoffs three times together.

Miggy has a .323 career average in his seasons with VMart, while Victor has hit .305, very impressive indeed. Cabrera had earned two MVP Awards, a Triple Crown, and three batting titles with VMart in the lineup with him. In 2014 Martinez had one of the best seasons in recent Detroit history when he hit .335 with 32 homers and a league-best .974 OPS. He finished second in AL MVP voting, while Miggy was ninth.

Based on their success leading the Tigers to the postseason and their individual honors, Miggy and VMart rank among the best hitting duos in Tigers history. But they can’t compete with Ty Cobb and Sam Crawford for production, or Al Kaline/Norm Cash for longevity and power-hitting.