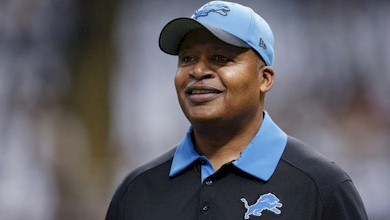 Head coach Jim Caldwell will be back for a third season with the Detroit Lions in 2016.

11-5 in his first season as head coach and a playoff loss in the first round to the Dallas Cowboys. Then a 1-7 start in his second campaign for the Detroit Lions.

Yet, contrary to popular belief, new Lions general manager Bob Quinn made the right move in retaining Jim Caldwell for a third season.

In what was a difficult first decision for Quinn in the capacity of head honcho of decision making, he was pressured with making a decision that would appease the Lions’ fanbase — the majority of which wanted to see Caldwell ousted after the Lions experienced a disappointing 7-9 campaign in 2015.

However, as a man with New England Patriots ties who served as the director of pro scouting from 2012 until this past season for Bill Belichick and the four-time Super Bowl champions, Quinn understood the importance of putting the best interests of the team before the desires of the fans.

Subsequently, despite all of Caldwell’s in-game management miscues — such as his failure to put Calvin Johnson in to prevent Green Bay’s Hail Mary heave at the end of the Lions’ Thursday night home contest against the Packers this past December, Quinn saw the writing on the wall regarding the lack of viable head coaching options available to replace the former Indianapolis Colts head man.

There are also two key points to make regarding Quinn and his decision to bring back the Tony Dungy disciple. First off, Caldwell helped the Lions go 6-2 in their final eight games of the season and kept the locker room in order, winning over veterans and youngsters alike if he hadn’t already.

Secondly and arguably most importantly, the man who was perhaps the most likely replacement for Caldwell was New England offensive coordinator Josh McDaniels. McDaniels failed in his first head coaching gig with the Denver Broncos, going 11-17 from 2009-10 with the Broncos. As a further black mark on his credibility as an NFL head coach, the 39-year-old played an integral role in the trading up for and drafting of Tim Tebow by Denver with the 25th overall pick in the first round of the 2010 draft. Ouch.

In other words, McDaniels can be credited with serving as the primary initiator of the “Tebowmania” movement and epidemic that swept the nation over the course of the former Florida Gators quarterback’s three seasons in the league. In my opinion, it’s hard to take anyone seriously for a head coaching gig who pput so much faith in a quarterback, like Tebow, who has a knack for inaccurately throwing the football.

By not forcing himself to make a move for the sake of making a move, Quinn is putting the health of the franchise first. Even as you moved down the list of likely candidates, there were few enticing choices outside of some hot-shot coordinators, such as Detroit defensive coordinator Teryl Austin (who has no prior head coaching experience) or Ypsilanti native and one-time Lions assistant Adam Gase (who left his offensive coordinator post with the Chicago Bears to become the head coach of the Miami Dolphins).

There was a more qualified candidate than McDaniels, Austin and Gase in the form of a former head coach with two Super Bowl victories to his name.

If Robert Griffin III career-destroyer Mike Shanahan is the first name that came to mind, then you and I are on the wrong page.

It’s because I’m talking about Tom Coughlin, who spent 12 years coaching in a big market where expectations were constantly sky high for the New York “Football” Giants.

Coughlin dealt with the true “dungeon of doom” media types in his time with the G-Men, and handled such negativity from New York’s media members with a supreme amount of class.

Additionally, he won a heck of a lot of football games — 102 to be exact — to go along with two Super Bowl trophies which were both won over the greatest team of the 2000s in the aforementioned Patriots.

Despite all these positive attributes and accomplishments for the 69-year-old, it can’t go without mentioning that he finished 6-10 in his final two campaigns with “Big Blue,” which was ready for a change after missing the playoffs for a fourth straight season under his leadership.

Also, the fact that Coughlin is closer to 70 than he is to 60 is a key factor in him choosing his next coaching stop. In fact, it has already been reported that he plans on coaching only two to three more years and wants to win right away.

Winning immediately is a circumstance the Lions can’t absolutely guarantee, and it will remain that way until they upgrade their offensive line and add playmakers to the defensive side, where they are still in search of a true replacement for defensive tackle Ndamukong Suh.

Thus, Coughlin wasn’t making the move from the Meadowlands to the Motor City anytime soon.

Sadly for some Lions fans, it leaves Caldwell with the head coaching reigns for a third season.

However, it’s not worth crying over yet. From all accounts, Caldwell will be anything but safe throughout the 2016 campaign. Any slip ups, such as another 1-7 start on his watch, and he will be ousted.

The Lions might not be in a Super Bowl-or-bust mode at the present moment, but it doesn’t mean they can suffer through another losing season with an incompetent in-game tactician leading the way.

It’s why it is paramount for Caldwell to lead the Lions to the playoffs in ’16. If he fails to do so, Quinn will be forced to make his first head coaching fire.

Since Caldwell isn’t “his man” anyway, it’s something that I don’t think Quinn will mind doing if he has to.