Why can’t a Canadian team win the Stanley Cup? 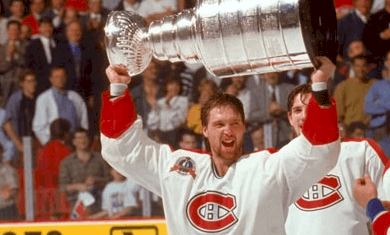 The Montreal Canadiens are the last Canadian team to win the Stanley Cup, having hoisted the trophy in 1993.

There’s nothing like the Stanley Cup Playoffs, as any hockey fan knows. The excitement in the sport at this time of year is off the charts.

Unless you live in Canada.

This year, for the first time in history, no Canadian team made the 16-team Stanley Cup tournament. As a result, an American team is guaranteed to win the Stanley Cup for the 23rd consecutive season. That’s pretty embarrassing for Canada, the nation where ice hockey was invented and built into a popular professional game.

As of the 2015-16 season, there are seven Canadian teams in the National Hockey League: the Calgary Flames, Edmonton Oilers, Montreal Canadiens, Ottawa Senators, Vancouver Canucks, Toronto Maple Leafs, and Winnipeg Jets. The last time a team north of the border hoisted Lord Stanley’s Cup was in 1993 when Montreal skated to the title. Since then, not only has Canada been shut out, they’ve only had four teams advance to the Finals.

What’s stopping our friendly neighbors to the north from winning a Cup title? There are several theories.

Economy has worked against the Canadian teams

First, for much of the last two decades the economics of hockey have been in favor of the U.S. clubs. The NHL opened up the free agency rules and spending limits which favored teams with deep pockets from wealthy owners. Many of the Canadian teams are owned by less wealthy owners and are in smaller markets with less revenue opportunities. In addition, the Canadian dollar was pretty weak for many years. While magnates like Detroit’s Mike Ilitch were writing million-dollar checks to attract the best players to their team, the Oilers and Jets and Canucks, for example, were often struggling just to survive.

The talent prefers to live in the United States

After Wayne Gretzky shocked the sports world by moving from Edmonton to Los Angeles, hockey’s focus shifted from Canada to the United States. Suddenly, ice hockey was a hit in warm cities like LA and Dallas and later Tampa Bay. Not only do players who are from Canada and Europe want to play in the U.S., but the best coaches and scouts want that too. It’s more comfortable, cheaper, and there’s more to do for their families.

In the 1990s it so happened that three great teams were all in the Western Conference: the Colorado Avalanche, Dallas Stars, and Detroit Red Wings. From 1995 to 2002, one of those three teams was in the Finals every year and the three teams combined for six Cup titles. Not only were those teams pounding the other teams in the league, they were motivated to get better to compete among themselves. The Wings and Avalanche carried on a storied rivalry for much of that period, not only for supremacy on the ice but for acquisition of the best players.

In the other conference the Pittsburgh Penguins and New Jersey Devils raised each other to new heights with a similar rivalry. Meanwhile, the Canadian teams were floundering for the most part.

In 2004, 2006, and 2011 the Stanley Cup Finals went to a seventh game, but the Canadian representative lost each time. In ’04 Calgary lost a heartbreaker in OT in Game Six at home and then lost Game Seven by a single goal to the Lightning. The Flames were a great team but they were unable to defend their conference title the following season because of the cancellation of the season due to the labor dispute.

In 2011 it appeared the streak may end when the Canucks skated out to a two games to none lead in the Stanley Cup Finals against the Bruins. They also held a 3-2 lead after five games, but Boston won the last two contests to spoil Canada’s great hope.

Where are the Canadiens and Maple Leafs?

There was a time when Montreal reigned supreme over hockey. From 1953 to 1979, a span of 26 seasons, the Canadiens won 16 Stanley Cup titles. They had some of the greatest players in the history of the game, the best fans, and the best coaches. But since 1993 they have been mortal, failing to make the playoffs eight times since. The Canadiens have had ten head coaches in the last two decades.

Toronto was also a member of the “Original Eight” in the NHL, and in the 1940s they lifted the Cup five times. In the 1960s they won the title four times, frequently defeating Gordie Howe and the Detroit Red Wings. But as the league expanded the Maple Leafs stagnated, and even though they made the playoffs almost annually from 1969 to 2004, they failed to win another title, never once advancing to the Cup Finals. In the last eleven seasons, the Leafs have made the playoffs only once. The last time Toronto won a playoff series was in George W. Bush’s first term.

When will a Canadian team win the Stanley Cup again? Well, the drought may continue for a while. In the 2015-16 season, only one of the seven Canadian teams won more games than they lost, the Senators, who still finished eight points out of the playoffs.

The top five players in goals, plus/minus, and goals created were all on American teams in 2015-16. The top four points leaders were all on U.S.-based teams. Only Ottawa’s Erik Karlsson, who finished fifth in points, broke the top five in the major stat categories in the most recent season.

Given the rich history of hockey in Canada it’s too bad that the game has become so dominated by teams in the United States. After all, “America’s Hat” deserves better than that.