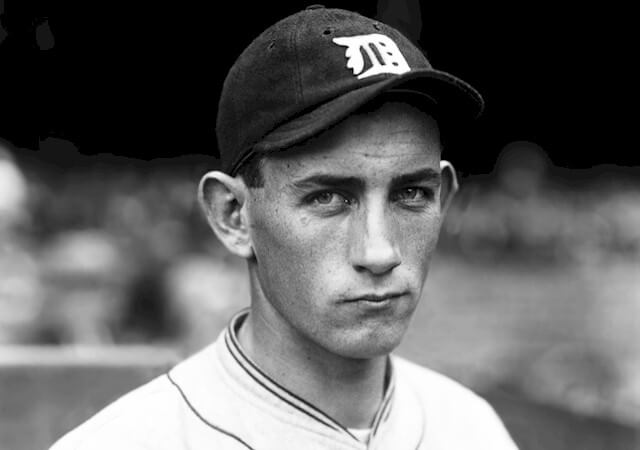 Fowlerville native Charlie Gehringer is the greatest second baseman to ever play for the Detroit Tigers.

Fowlerville, Michigan is a small farming community about 60 miles west of Detroit. It’s always been a small town, from its incorporation in the 1870s to the most recent census which shows a total of about 2,800 residents. But Fowlerville did produce the greatest ballplayer to ever be born in Michigan: Charlie Gehringer.

Gehringer starred for the Detroit Tigers from 1924 to 1942, eventually earning election to the Baseball Hall of Fame. He earned a reputation as one of the most polite, modest, and consistent players of his era. More than 70 years after his last baseball game, there are many who have forgotten about Gehringer. Even those who know he rates as the best second baseman in Detroit history, and one of the best in baseball history overall, may not know much about Gehringer. Here are nine facts you probably didn’t know about baseball legend Charlie Gehringer.

Hated Farm Work
Charlie was born on May 11, 1903, and his father Leonard was a farmer, working his own land as well as earning a living as a farmer on other farms in the Fowlerville area. But Charlie never took to farm work. “He never set the North River on fire working at anything,” his grandfather recalled years later, “[Charlie] was all right when you got him started, but it was a tough job getting him started. I guess he just wasn’t cut out for farm work.”

One can hardly blame Charlie for not taking to the tough work that comes with living on a farm. Many children who grew up on farms in the first half of the 20th century avoided labor as much as they could or reluctantly did their chores.

#1. A Star on the Hardwood
Gehringer made his parents immensely proud when he earned a scholarship to play for the University of Michigan. He would be the first Gehringer to attend college. But he didn’t go to U of M on a baseball scholarship, it was a basketball ride. Charlie played baseball and football for the Wolverines, but he earned his only letter as a basketball player. Gehringer was a shooting guard.

#2. Veach’s Vacation Led him to Gehringer
Just prior to the 1923 season, Tiger outfielder Bobby Veach went on a hunting trip to Fowlerville. While there he was persuaded by locals to take a peek at this young ballplayer named “Charles Gehringer.” Veach watched him play for the local team and when he returned to Detroit he urged the Tigers to look at the young infielder. A few weeks later Ty Cobb and Frank Navin invited Gehringer to Navin Field for a tryout. They liked what they saw and offered the youngster $3,900 ($3,600 in salary and a $300 signing bonus) if he’d put his name on a contract. Gehringer had to go back home to ask his parents for permission (Mom was unsure, but Dad said yes) but he signed and within a year he was playing on the Tigers alongside Cobb (but not Veach, who had been traded to the Red Sox).

#3. Lost His Father Before He Made it to the Big Leagues
Sadly, early in 1924, Leonard Gehringer passed away, only weeks before Charlie made his debut with the Tigers. he never got a chance to see Charlie’s great success as a ballplayer. Charlie’s mother was a diabetic and suffered with health issues, as a result Charlie lived with her for the next 22 years until her death in 1946. He refused to marry while his mother was alive, feeling it would not be fair to a wife to expect her to also live with and care for his ailing mother.

#4. Missed Out On Wall Street
In his first three seasons, Gehringer played under Ty Cobb, who was still active as a player but managing the Tigers as well. Later, Gehringer would explain how Cobb helped him learn to hit in the major leagues. He also credited Cobb with assisting in his ability to play every day, a trait Gehringer showed well in his career. But there was one area where Cobb could not help Gehringer, even though the veteran tried: investments.

“He would tell us young ballplayers about stock tips he had, what to invest in, which companies were going to be make it,” Gehringer said later, “But none of us had any money to invest, so all we could do was nod and smile.”

Cobb made millions investing in General Motors and Coca-Cola, while Gehringer sent most of his paycheck home to his mother.

#5. Has Tigers Longest Consecutive Games Streak
Twice in his career, Charlie Gehringer played in at least 500 straight games, quite a feat for a middle infielder who is often in harm’s way on slides into second base. Gehringer and Pete Rose are the only players to have two streaks of at least 500 games in their careers. Gehringer’s first streak ran from 1927 to the middle of the 1931 season, and tallied 511 games. He played the last 12 games of the ’31 season and started another streak, running it until August of 1935 for a total of 577 consecutive games, a Detroit franchise record. No other tiger has ever played as many as 500 consecutive games.

#6. Used Cobb’s Bats
Having lost his father a few years earlier, Gehringer looked to Ty Cobb as somewhat of a father figure early in his career, and the Detroit star provided some guidance. The Georgia Peach also provided lumber: he let Gehringer use his bats. Early in his career, Charlie used the Cobb model bats, though he later switched to a slightly shorter and lighter bat.

#7. Man of Few Words
Throughout his career, Gehringer was acknowledged as being rather quiet. He was a shy man, especially in the company of his teammates and large groups of people. But when he was able to be alone or in a small group, Charlie did impress many people with his intelligence and sense of humor. Once at a banquet in his honor, he rose to accept an award, and said, “I’m known around baseball as saying very little, and I’m not going to spoil my reputation.”

#8. Taught Himself to Golf Right-Handed
Gehringer was so polite, he didn’t even want to bother to correct his fans when they gave him the wrong set of golf clubs. As Richard Bak recounted in his excellent book on Detroit baseball of that era, Cobb Would Have Caught It, adoring fans from Fowlerville showered their native son with gifts during a special day in his honor at Navin Field in 1929:

“They presented me with a set of golf clubs,” Gehringer told Bak, “They were beautiful: matched Spalding irons and woods with a beautiful leather bag. They also were right-handed, and of course I’m left-handed. But I learned how to play the game right-handed, those clubs were so nice. Anyway, we played the Yankees that day and we won big. I started off with a home run. I had four hits and almost hit for the cycle, and to top it off I stole home. I probably had some better afternoons, but that was kind of a special day.”

#9. Nearly Came Out of Retirement after World War II
By the time the United States was entering World War II, Gehringer’s career was already winding down. He turned 39 years old in 1942, his final season in the big leagues. That offseason he enlisted in the U.S. Navy and served three years, ending his baseball career. Not long after Gehringer came back from the war his mother passed away. To deal with the loss of his mother, whom he had cared for for years, Gehringer sank himself back into athletics and got himself in great shape in 1946. He asked the Tigers to consider letting him work out with them at spring training, but with his 43rd birthday approaching and since he hadn’t played a professional game in four years they declined. Gehringer “officially” retired, telling The Sporting News, “I gave the game all I ever had.” Four years later, the Tigers hired him to be their general manager.