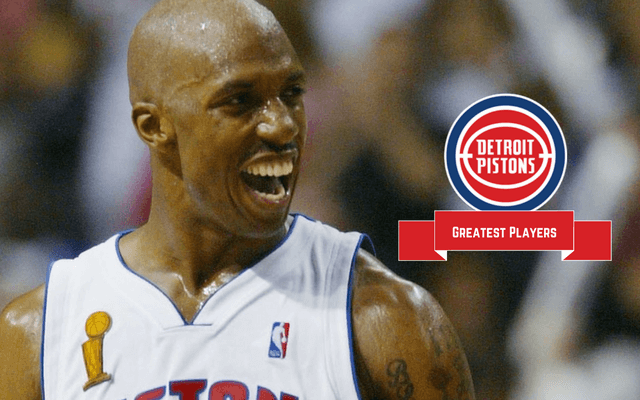 This is the second in a series that looks at the greatest players in the history of the Detroit Pistons.

The moniker became synonymous with longtime Pistons floor general Chauncey Billups, a cornerstone of the franchise’s 2004 championship squad and its six straight Eastern Conference Finals appearances from 2002-03 until 2007-08.

While Ben Wallace was easily the anchor of the Pistons’ defense during their back-to-back Finals appearances in ’04 and 2005, Billups was “the straw that stirred the drink” of those teams’ well-functioning offensive attacks.

Whether the situation called for Billups to set up Richard “Rip” Hamilton on one of his signature mid-ranger jumpers or another one of his teammates for a bucket or even to knock down a bucket of his own, he always seemed to be in control and able to execute the play.

That’s what made him the perfect player to man the point for a team with championship-level expectations and ability.

You wouldn’t have believed that Billups, who was drafted by the Boston Celtics with the No. 3 overall pick in the 1997 NBA Draft, would have risen to stardom based on his early career experiences, though.

He failed to record a field goal percentage of at least 40 percent until his fourth season in the league (2000-01) and his first with the Minnesota Timberwolves, which already were the fourth NBA franchise he logged minutes for.

Yes, the man who became a five-time All-Star played for four teams and was a member of a fifth who he never played for — the Orlando Magic — in his first four NBA seasons. Not exactly the typical way for a future All-Star to start off his career.

Before his sudden rise to stardom, it was easy to believe that Billups would join the NBA’s long list of draft busts.

Yet, Billups became a better point guard and team leader because of those rough experiences.

He spent two seasons playing alongside future Hall of Famer Kevin Garnett in Minnesota before joining the Pistons via free agency in July of 2002. His first season in Motown was his age 26 season, and luckily for the Pistons, he was just hitting his prime.

Billups averaged a then career-high 16.2 points per game in his first campaign in Motown, and then padded onto his PPG total in his second season, elevating it to 16.9.

Although his field goal percentage went down to below 40 percent (39.4) during the 2003-04 campaign, his assists per game total increased to a then career-high 5.7, and most importantly, he helped the Pistons reach the NBA Finals for the first time since 1990.

The Pistons met a Western Conference rival of theirs from the 1980s, a team that the “Bad Boy” Pistons lost to in the 1988 NBA Finals and defeated in the 1989 Finals, the Los Angeles Lakers.

Equipped with four future Hall of Famers (Kobe Bryant, Karl Malone, Shaquille O’Neal and Gary Payton), the Lakers were heavily favored and were expected to wipe the floor clean with the Pistons.

The Pistons flipped the switch, though, and beat the Lakers in five games. Billups locked down Payton and fellow Lakers point guard Derek Fisher, limiting both of them to under 10 points per game.

On the big stage of the NBA Finals, there was no chance of Payton or Fisher or anyone containing Billups, as he went off for 21 PPG while shooting 50.9 percent from the field and 47.1 percent from downtown. He also averaged a series-high 5.2 assists per game. In more ways than one, he provided what the Pistons were looking for, and subsequently, garnered Finals MVP honors.

Chauncey cemented his legacy right then and there as one of the greatest ever to don a Pistons uni.

Leading up to the Finals, he also made his greatest shot ever as a Piston. It came in the Eastern Conference semifinals in what was a highly contested series with Jason Kidd and the then-New Jersey Nets. In the first four games of the series, the home team won each game, leading to Game Five.

Game Five was easily the highest-scoring game of the series and a triple-overtime, instant classic. And who propelled the game to become an instant classic? None other than Mr. Big Shot himself with the definition of a big shot in the final seconds of regulation.

The Pistons had a chance to tie the game with 2.9 seconds remaining but had to drive the length of the court just to get a decent look at the basket. The ball was put into the hands of Billups, and magic ensued. He heaved up a shot from just in front of half court, and I think you can guess what happened next: he nailed it. The Palace erupted, and at one point, you could see Rip hugging Billups with the firmest of grips.

It’s a shot that no one at the Palace or watching on TNT that night will ever forget. Yet, many would like to forget the ending: a Pistons loss, causing Detroit to temporarily lose its home-court advantage.

The Pistons got it right back after winning Game Six and then blew out the Nets in Game Seven.

That Game Five might have worn out the Nets, and as a result, might have been a blessing in disguise for Billups and his teammates.

Kidd only scored 11 points the rest of the series, while Billups scored 33 in the remaining two games, including a game-high 22 in Game Seven.

The Pistons only suffered one loss at home the rest of the postseason (against the Indiana Pacers in the Conference Finals), and defeated the Lakers in three straight games at the Palace to close out the Finals.

The 2003-04 campaign is the greatest one I’ve experienced as a Pistons fan. Before it occurred, I only liked the Pistons. Because of it, I started to love the Pistons and their players, most notably Billups and “Big Ben.”

Billups, a product of the University of Colorado, had only just begun to collect his individual accolades, too.

He was named to two All-Defensive Second Teams, three All-NBA squads (one Second Team and two Third Team selections) and five straight All-Star Games from 2005-06 until 2009-10, with the last two coming while with his hometown Denver Nuggets. He was dealt by then-Pistons front office boss Joe Dumars for aging superstar Allen Iverson at the beginning of the 2008-09 campaign.

Iverson was a shell of his old self, and the trade has been widely panned ever since. It officially brought an end to the Pistons’ title window, too.

It’s not the exit from Motown that Billups deserved, and the Pistons recognized it and brought him back for his final season in The Association (2013-14).

His jersey retirement followed Big Ben’s, which was extremely fitting since defense was the cornerstone of that team. It was their “M.O.,” and Wallace was the founding father of it. The Pistons maintained the identity after the departure of Wallace, too, largely due to Billups’ presence.

It’s why when Billups was traded, the team took a turn for the worse, and failed to record another winning campaign until last season.

So, while Billups might not have been of the same caliber defensively as Wallace or as good of a scorer as some Pistons guards who came before him, such as Isiah Thomas, he still deserves to be remembered as one of the all-time franchise greats for “stirring the drink” for some of the best teams in franchise history.