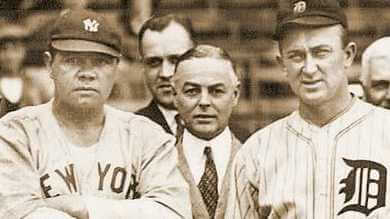 Babe Ruth and Ty Cobb were uneasy with each other during their playing days.

The hitting styles of Ty Cobb and Babe Ruth could not have been more different.

Cobb was the greatest star of the Deadball Era. In his day, runs were manufactured and hard to come by. The bunt, the hit-and-run, the stolen base, “place-hitting,” protecting the plate, and the base on balls were all very much in fashion. Cobb referred to it as “scientific baseball,” and he was the master of it.

Home runs, at least those not of the inside-the-park variety, were rare.

But when Babe Ruth came along beginning in the latter half of Cobb’s career, that all went out the window. Ruth popularized the home run, and offense exploded league-wide.

The rivalry between the two future Hall of Famers reached its peak in the early 1920’s. By that time, Ruth was slugging it out for the Yankees and putting up record-breaking numbers. He had also stolen most of the headlines from Cobb.

The Georgia Peach didn’t think much of The Babe, or of his power-hitting ways. To Cobb, scientific baseball was the way the game was meant to be played. In his eyes, home runs were an abomination.

In their long and illustrious careers, out of all the many times they clashed together on the baseball diamond, there were three games in which both Cobb and Ruth homered. Wouldn’t they have been worth the price of admission!

Here’s a look at the circumstances of each:

The first such game was on July 11, 1920, in New York. The Yankees at that time played in the Polo Grounds in Upper Manhattan; The House That Ruth Built was still being constructed across the Harlem River, in the Bronx. With 35,000 in attendance, first-place New York won it, 6-5. Ruth’s homer that day was his 27th of the season, which easily led all of baseball. A solo shot, it came in the third inning, “A line drive,” wrote the New York Times, “which spattered among the customers who inhabit the lower floor” in right field. It also extended Ruth’s hitting streak to 25 games. Cobb, suffering from a sore leg, blasted an upper-deck shot to left a few innings later, only his second of homer of 1920.

The following season, in a game on June 14, both men homered again. Only 15,000 were on hand at the Polo Grounds, but they missed seeing Ruth launch two homers, making it seven in the last five games for the Sultan of Swat. Both were hit off Tiger starter Hooks Dauss. The first one was a titanic opposite-field dinger. Wrote the Times: “It soared away out of sight against the pale blue of the sky and across left field, a direction sought by few of his wallops. It hit the fence at the rear of the bleachers when it finally made up its mind to come down.” In the third frame, Ruth hit one to dead centerfield, several rows back. That gave him 23 home runs on the season. Cobb hit a solo shot just over the fence in right-center field, his ninth. The game was a slugfest, with the Yankees prevailing 9-6.

Finally, on August 24, 1924, Cobb and Ruth both homered in a game at Yankee Stadium. The Tigers won, 7-2, to close to within two-and-a-half games of New York and Washington, who were both tied for first. Ruth’s two-run homer in the opening inning off Dutch Leonard gave the Yanks a quick lead. Later in the game, Ruth made a bid for a second homer, but Cobb sprinted to the wall in right and made a fine leaping catch on his hard-hit ball. With the game tied two-two in the seventh, Cobb came to bat against Bullet Joe Bush with two out and Heinie Manush on first. On a two-two count, Cobb drove one into the bleachers in right for a two-run homer. It was only his third of the season. The 50,000 Yankee fans went home disappointed.

Given Cobb’s ability as a hitter, and his quick bat, he could have hit more home runs in his career had he chose to do so. But he stubbornly stuck to the hitting style that had made him famous. Still, there were times when Cobb could play long ball with the Babe. What great theater these games must have been, with the two biggest stars of the sports world showcasing their talents.