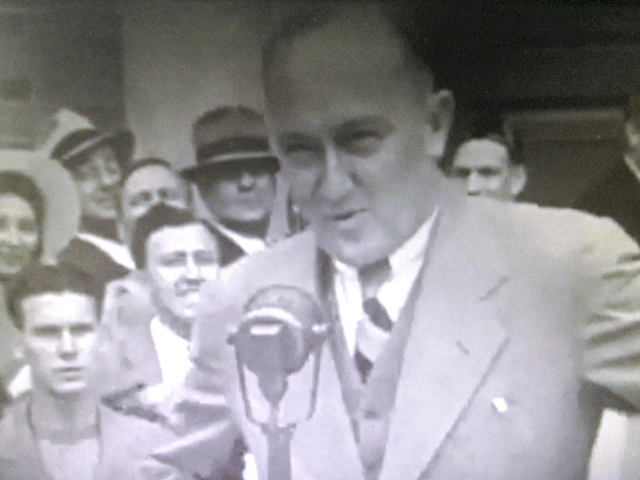 Ty Cobb gives a speech on the steps of the National Baseball Hall of Fame and Museum for the dedication of that institution on June 12, 1939. Cobb received the most votes in the first election.

The announcements for the first “class” of inductees were made via telegram and newspapers. Cobb did not receive word that he’d been selected until two days after the fact, on January 31, 1936. He was at his lodge in Lake Tahoe, most likely doing something outdoors on his lakefront property, when the telegram arrived from his friend, famed sportswriter Grantland Rice. It read:

Dear Ty: Baseball’s writers have elected you to the Hall of Fame. This esteemed honor is deserved and heralds your place as baseball’s greatest performer and competitor. Your vote total exceeded by no one. I send my congratulations. Four others join you in the Hall of Fame. Warm regards, Grantland Rice.

One cannot help but notice the omission of the names of the four “others” who were also elected: Babe Ruth, Honus Wagner, Christy Mathewson, and Walter Johnson. Rice knew well that Cobb would hardly care at all who else got the honor, he would be most proud to be the top vote-getter. Especially over his one-time rival, George Herman “Babe” Ruth, the man Cobb often called “Big Nose.”

The first election was performed by 226 members of the Baseball Writers’ Association of America (BBWAA), the same group tasked with the duty today. Cobb received 222 votes. Why four voters would not vote for Cobb is beyond comprehension. At the time, Cobb held more than 80 baseball records, including most hits, runs scored, stolen bases, total bases, times stealing home, batting titles, and career batting average, an astounding figure of .367. Still, four voters felt it necessary to keep the Georgia Peach off their ballot. Perhaps even more startling: 11 writers failed to vote for Ruth. The “Sultan of Swat” had retired only one year before, and his slugging exploits were so remarkable that he transformed the game (much to Ty’s chagrin). How anyone could not vote for Cobb or Ruth still boggles the mind.

But at the time, no one was debating the vote totals, though there was some debate over the inductees, namely the omission of Rogers Hornsby and Tris Speaker, two of the greatest players from the early part of the twentieth century. Hornsby was the greatest right-handed hitter in history and held most of the National League batting records. Speaker was a well-liked player in both Cleveland and Boston and his defensive exploits in the outfield were considered the most remarkable ever seen on the diamond. Both failed to earn election in 1936, Speaker finishing seventh and Hornsby ninth. 19th century stars Napolean Lajoie and Cy Young were sixth and eighth, respectively. Three of those players would be elected in 1937: Lajoie, Speaker, and Young. Hornsby would remain a controversial subject for many years and would not earn election until 1942, his fifth time on the ballot.

Cobb’s election percentage of 98.2 percent would remain a record for 56 years until Tom Seaver surpassed it in 1992. Since then, three others (Nolan Ryan, Cal Ripken Jr., and most recently Ken Griffey Jr. in 2016) have surpassed Cobb’s mark. While most would agree that Seaver and the other three players deserved immediate induction, none would claim they were better all-around players than Cobb, a master who used cunning and skill to bat and run his way to greatness, and one observer said “had brains in his feet.”

Finally, on June 12, 1939, the National Baseball Hall of Fame and Museum was dedicated in Cooperstown, New York, a bucolic village tucked away in the hills of upstate New York. Most of baseball’s dignitaries were in attendance, and by that time 26 players had been elected by either the BBWAA or the old-timers committee. Of the 26, only one failed to attend, Christy Mathewson, who had died in 1925. Cobb was famously late, and while many reports have circulated that Ty did so on purpose, to avoid being photographed with some of his arch-enemies, or to show up commissioner Kenesaw Mountain Landis, the truth was far more innocent. Cobb and his son were late due to travel complications via train from the west coast. The great ballplayer did arrive a few moments after the famous photo of the inductees was taken, and he shook hands with everyone, even Landis and Ruth.

Always a southern gentleman, Cobb made a short, gracious speech for the occasion. The 49-year old was still in excellent shape, the only signs of age were his receding hairline and small wrinkles around his eyes. Dressed in a perfectly-tailored gray suit with a vest and striped tie and decked out in highly-shined shoes, Cobb climbed the steps of the museum on Main Street in Cooperstown before an excited crowd of onlookers. He spoke with his slightly slow southern drawl into a radio microphone that whipped his words across the country. His smile was wide and beaming. As the top vote-getter in the first induction class, he was first once again, just how he liked it.