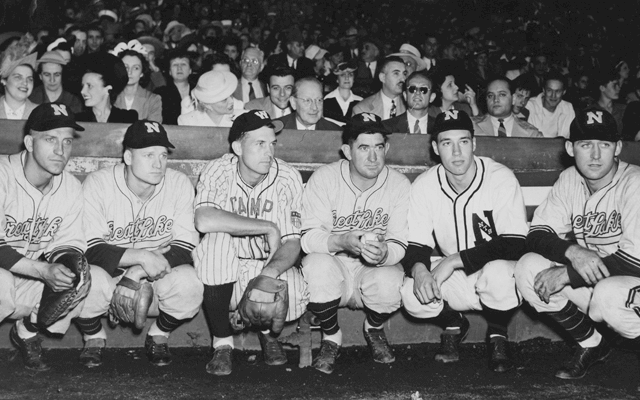 The best team in baseball in 1942 didn’t get to play in the World Series. That’s because the players had other jobs to do that were more important.

During the second World War, the Naval Station at Great Lakes, Illinois on the north side of Chicago was home to some of the greatest ballplayers on the planet. These were major leaguers who had stepped away from their big league jobs to serve their country. Their leader for three years was Mickey Cochrane, the former star catcher and manager of the Detroit Tigers, a man whom the secretary of the Navy had tapped for a special job.

“I know Mickey will whip the boys into shape,” said Secretary William “Frank” Knox, who appointed Lt. Cochrane as the supervising officer in charge of athletics at the Great Lakes academy near the shores of Lake Michigan.

In his first season at Great Lakes, Mickey not only had to form a team, he also had organize the hundreds of other sports programs at the facility. The men were able to go out for football, basketball, fencing, track & field, softball, and dozens of other athletic pursuits. For obvious reasons, Cochrane’s primary affection was for his baseball team.

Great Lakes was opened in 1911 after initially being funded by Theodore Roosevelt several years earlier. Sailors were trained there during World War I and in the intervening years leading up to WWII. But the station was actually closed during the Great Depression briefly before it was rescued by Illinois congressmen. It was during World War II that it became a city unto itself. At its peak there were more than 100,000 sailors on the site during World War II. Great Lakes was the largest military training station in the world at that time. Spread over 160 acres at its peak, there were thousands of barracks, classrooms, and training fields, as well as more than 90 swimming pools and their own fire department and water works department.

When you have that many antsy men in close proximity, you need something to let them blow off steam. The athletic programs at Great Lakes were well-funded as a result. It helped that the base commander, Capt. Robert Emmet, was a huge baseball fan. Of course the vigorous activity also helped to keep the men in shape. Even though the young sailors were enduring grueling training while “at work,” thousands of them played on baseball teams. At one time during WWII there were more than 800 teams at Great Lakes. 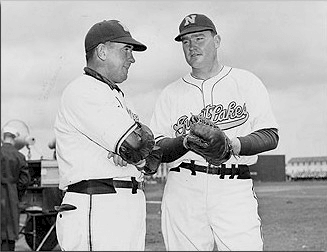 Mickey Cochrane and Johnny Mize in 1942 when Mize led the Great Lakes lineup with his powerful stroke.

At Great Lakes, Cochrane assembled a talented roster on his “varsity” baseball squad. The centerpiece of the offense was “Big Jawn” Johnny Mize, a gargantuan slugger with broad shoulders and a famous square jaw. Mize was 30 years old and a mature professional ballplayer by the time he entered the U.S. Navy. In his season with Cochrane’s Bluejackets, Mize hit 17 home runs in 51 games and batted over .475 while manning first base.

But the real stockpile of talent for the Navy team was on the pitching staff. Former Detroit star Schoolboy Rowe served as a coach as well as a pitcher. Then there were big-time major league stars Johnny VanderMeer, George McQuillan, Virgil Trucks, Johnny Schmitz, and Walt Masterson.

The Blue Jackets also boasted the greatest pitcher in the world, albeit briefly. Before he was shipped out to sea, Bob Feller showed off his blazing fastball in a Great Lakes uniform.

In 1942 the Great Lakes team posted a 52-10-1 record in games against college programs, minor league teams, other service teams, and even major league clubs. In one game against the St. Louis Cardinals, the Bluejackets won 7-1 behind their potent offense and the pitching of Trucks. In 1942-43-44, the Great Lakes team was 13-5 in games against major league teams or teams made up of MLB stars.

Service pride always at a high, so it was bound to happen that the Navy and Army would square off to determine supremacy. Navy Admiral Chester Nimitz and Army Lt. General Robert Richardson, Jr. came up with the idea for the “Serviceman’s World Series” in 1944. The seven-game series was scheduled to be played in Honolulu in September and both branches of the military went all-out to win it. But the Navy wanted it more — they flew in a dozen ballplayers to Hawaii from all over the globe to form a star-studded team of major league talent.

Behind former Tigers Trucks and Rowe, the Navy team dominated the series, easily capturing four of the first five. Nimitz and Richardson were so delighted at the success of the series and the way that the ballplaying was boosting morale for the servicemen watching the contests that they ordered four more games to be played. The Navy ultimately won seven of the nine games between the two teams. At one game there were more than 50,000 sailors and soldiers in attendance. The Sporting News reported that the talent on the field was “superior to any in competition for the league pennants in pro ball.”

By 1945 Cochrane was exhausted from all of his responsibilities and he was reassigned. Nimitz ordered that he be replaced by Feller, who coached the Great Lakes team for most of the 1945 season before the war ended in August and he returned to the Indians. Despite missing three and a half seasons while in military uniform, Feller struck out 12 Tigers and pitched a complete game to get the win in his return to the major leagues on August 24th.

With the end of the war, the Great Lakes baseball team lost its funnel of talent and was never the same. At its apex, the team was just as good, if not better, than the best teams in the big leagues. The level of competition in MLB during the war was well below pre-war standards. President Franklin Roosevelt made sure the game went on though, writing the famous “green light letter” in 1942 which urged professional baseball to continue playing to serve as an entertaining diversion for Americans.

Cochrane was elected to the Baseball Hall of Fame in 1947. He passed away in 1962, still living in Lake Forest, near the naval station. He was always proud of his tenure in the U.S. Navy. In 1976, the Navy named the baseball complex at Great Lakes “Cochrane Field.”