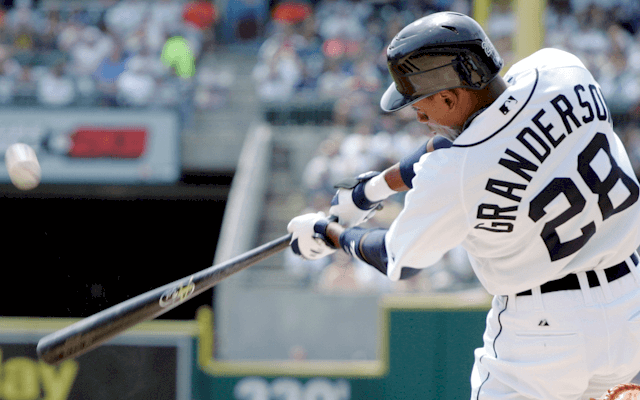 Curtis Granderson manned center field for the Detroit Tigers in 2006 when they captured the pennant. His Tigers’ jersey #28 is still a popular seller.

A decade ago, Curtis Granderson was roaming the spacious center field in Comerica Park.

He brought the high socks, the gritty play and unparalleled professionalism to the ballpark every day and to the blue-collar Detroit crowd, that easily made him a fan favorite.

It easily made him my favorite, too.

After growing up watching Alan Trammell and Lou Whitaker, I was certain nobody was going to make the jump to being someone I considered my favorite player ever again. Well, Granderson changed all that.

I loved the energy he brought on the field with the incredible absence of ego off the field. It is the dream of Detroit fans to have a player like that.

And it has been a tradition in the Motor City with guys like Sam Crawford, Harry Heilmann, Charlie Gehringer, Al Kaline and Trammell and Whitaker, to name a few.

But in this social media era where even the nice guys have something pop up and ruin their image — even for a little while — Granderson has remained squeaky clean in every sense.

Of course, a decade ago, Granderson led the American League with 174 strikeouts, too.

The 2006 season was his first as a full-time starter and it had its growing pains. Granderson chased pitches in the dirt and batted .260 for the season.

But then the playoffs arrived.

Granderson batted .294 with two home runs and five runs batted in in the four-game ALDS win against the New York Yankees. Then he batted .333 with another home run in the sweep of the Oakland Athletics in the ALCS as the Tigers reached the World Series for the first time since 1984.

Granderson struck out just three times in the playoffs and was a major spark plug for an offense that needed one in the postseason.

He didn’t have a great World Series, managing just two hits in five games against St. Louis, but it was his spark that got them to the Fall Classic in the first place.

That season was my first time covering the MLB postseason and in a postgame press conference during the Oakland series, I asked the question to manager Jim Leyland, wondering just how vital Granderson was in the postseason.

After two other reporters had been chastised by Leyland for, let’s call them not very good questions, Leyland actually said, “That’s a great question,” to me and went on and on about Granderson and how good he was going to be.
Leyland’s prediction came true. When Granderson began to cut down on the strikeouts, great things began to happen.

Granderson led the league in triples again the following year with 13 then launched 30 home runs in 2009 and made his first All-Star team.

Then of course, he was part of the famous three-way trade that brought Max Scherzer and Austin Jackson to Detroit, and landed Granderson in pinstripes.

He struggled his first season in New York then led the American League in runs and RBIs in 2011 and made his first of two All-Star teams with the Yankees. In the Bronx, Curtis crafted his lefthanded swing to launch home runs over the short right field dimensions of Yankee Stadium. He became a power threat.

Granderson then moved on to the Mets and helped lead them to the pennant last year. He’s now topped twenty homers in a season for three teams.

Even though he’s no longer a Tiger, Granderson remains popular in Detroit. When he returns to Comerica Park he always receives a thunderous ovation. His #28 Curtis Granderson Detroit jersey continues to sell well among Tiger fans.

Now 35 years old, the veteran has played for three teams in the postseason and two in the World Series, but nothing proved that he belonged like that first one in 2006, when he sparked the Tigers to the pennant in his first full season as a big leaguer.