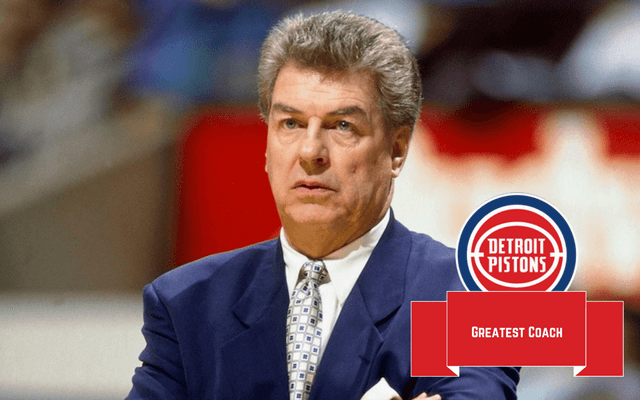 Affectionately referred to as “Daddy Rich” due to his penchant for wearing high-end suits and looking supper snazzy on the sidelines, Daly served as coach of the most iconic Pistons team in franchise history: “The Bad Boys.”

The Bad Boys, winners of back-to-back NBA championships in 1989 and 1990, had a penchant for playing highly physical defense which often involved brutal takedowns of the opposition’s best offensive performer.

Especially when the player’s last name was Jordan. We’ll dive into the specifics of that later.

Simply though, Daly’s teams, at their best, would take the opposition’s go-to scorer off his game and make the rest of the opponent’s players beat them.

Daly’s players knew that was the gameplan every time they went to battle for him, and because they so highly respected him, they executed it to the best of their ability on a nightly basis.

Before Daly rose to fame and success with the Pistons, the Naismith Memorial Basketball Hall of Famer served as the head coach of the Cleveland Cavaliers — then popularly known as the “Cadavers” — during the 1981-82 season.

He didn’t even last one full season.

Daly was fired by then-Cleveland owner Ted Stepien, the primary culprit for the Cavs becoming the Cadavers, after going 9-32.

You can consider Daly one of the lucky ones from that highly panned era in Cleveland basketball, too.

By being canned, Daly had the opportunity to remove himself from an ugly situation — after he received his walking papers, the Cavs failed to post a winning record until the 1987-88 season (42-40).

During his abbreviated stint with the Cavs, Daly did have one positive thing happen to him, though. He got the chance to acquaint himself with a green-behind-the-ears, 24-year-old Bill Laimbeer, who was just in his second season in the league.

Laimbeer was drafted by the Cavs in the third round of the 1979 NBA Draft out of the University of Notre Dame.

Before legendary Pistons front office head honcho Jack McCloskey struck a deal for Laimbeer in February of 1982, Laimbeer had only started four games in his career (all four starts came during the 1981-82 campaign).

The Pistons swiftly made a change to that, as they started Laimbeer in all 30 games that he suited up for them at the end of the ’81-’82 season.

And by the time that Daly took over the Pistons (at the start of the 1983-84 season), Laimbeer had already become a full-fledged starter in the frontcourt and an All-Star.

Laimbeer really began to thrive when Daly arrived to Motown, though. He hadn’t averaged north of 15 points a game over a single season until Daly came to town.

Statistically, it was the best four-year stretch in Laimbeer’s 14-season NBA career, and it all happened under the tutelage of Daly.

Daly got the most out of Laimbeer and his Detroit teammates because he let them be themselves on the basketball court.

He allowed Laimbeer to be the “baddest” of all The Bad Boys because he knew it benefited the team.

In a nutshell, that was the beauty of Daly.

He allowed his players to feel comfortable being their true selves on the floor because he knew it was the best way to get the most out of his teams.

He knew that it was the most effective way to unleash the scoring prowess of Bad Boys floor general Isiah Thomas and the rebounding and defensive prowess of Dennis Rodman.

Daly wisely realized that it was the only way his Bad Boys would be able to dethrone the legendary Larry Bird-led Boston Celtics as Eastern Conference champions and later the iconic “Showtime” Magic Johnson-led Los Angeles Lakers as NBA champs.

At the same time, the Pistons had to worry about fending off the up-and-coming Chicago Bulls led by the one and only Michael Jeffrey Jordan.

The Pistons kept MJ and the Bulls down as long as they could using tactics instilled by Daly called “The Jordan Rules.”

“The other rule was, any time he went by you, you had to nail him. If he was coming off a screen, nail him. We didn’t want to be dirty — I know some people thought we were — but we had to make contact and be very physical.”

The Pistons made Jordan pay every single time he drove the lane, with Laimbeer, Rodman and others, such as Rick Mahorn, greeting him rudely at the rim with an elbow or shove to the ground.

The Bad Boys embraced this tough-as-nails mentality of their coach, and it allowed the Pistons to give the Bulls the “little brother” treatment for three straight postseasons — in the 1988 Eastern Conference semifinals and in back-to-back Eastern Conference Finals matchups in 1989 and 1990.

The Bulls finally got their long-desired revenge for those three straight playoff defeats in a series sweep of the Pistons in the 1991 conference finals.

However, the Pistons had already made their impact on the game by that point, with consecutive NBA titles in ’89 and ’90.

And the man who helped elevate the Pistons to world champions and later the “Dream Team” to Olympic gold medalists at the 1992 Summer Olympic Games? Chuck Daly.

To be fair, Daly had more than enough talent to work with while serving as the head man of both the Pistons and Dream Team.

However, the difference between him and other coaches is that he was an expert in massaging the egos of his players and in coercing his players to work hard for him on both ends of the floor.

It made him a champion head coach and the best one to ever roam the sidelines in Pistons franchise history.