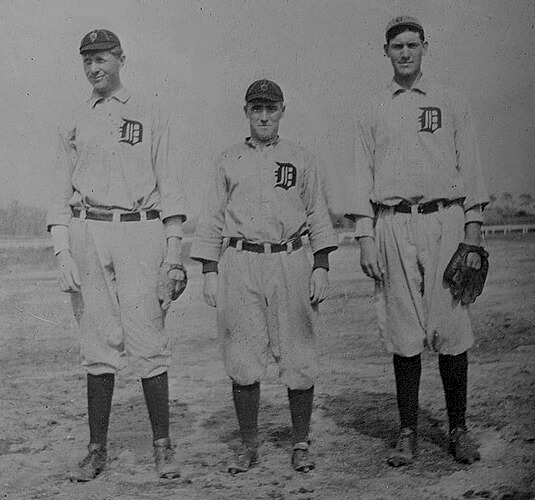 Bun Troy (left) with Donie Bush (center) and Fred House (right) at spring training with the Detroit Tigers in March of 1913.

When you pitch only one game in the major leagues you’re usually quickly forgotten. But Bun Troy deserves to be remembered, for his one game, but also because after his baseball career he paid the ultimate sacrifice under heroic circumstances on the battlefield in Europe during World War I.

Troy wasn’t born into a baseball family, in fact where he was born very few people knew or cared what baseball was. Robert Gustave Troy was born in Germany on August 27, 1888, into a farming family. Before he was five years old the family moved to the United States and settled in Pennsylvania. The farming must have been good there, because Troy grew up tall and strong. By the time he was in his mid-teens he was six-foot tall and strong as a bull. He eventually stretched out to six-foot, four inches tall and nearly 200 pounds. He was extraordinarily tall for the early twentieth century.

Troy had little use for farm work so fortunately his athletic exploits in the Quaker State soon earned him a contract to play baseball professionally, close to home at McKeesport in the Ohio/Pennsylvania League in 1910. Troy, who went by “Bun” (the reason seems to have been lost to history), was a right-handed pitcher who caught the eye of a big league scout from the Philadelphia Phillies, but did not come to terms with the team and spent 1911 in the OPL again.

Then in 1912 at the age of 21 Bun had a breakthrough season for the Adrian Lions of the Southern Michigan League. That year in Adrian, Troy mastered his fastball and curveball (for which he was known) as he won 23 games and pitched in more than 320 innings. By all accounts, the German was a man among boys in that low level minor league, and after he pitched and won both games of a doubleheader against Kalamazoo, he earned a look from a very important scout — Detroit owner Frank J. Navin himself.

Shortly after Troy twirled complete games in both games of the doubleheader, Navin made the trip south to Adrian, Michigan and apparently liked what he saw in Troy. He considered the young pitcher “a real diamond in the rough” according to Sporting Life, and told his scouts to sign him immediately after the minor league season ended. A few weeks later, the tall, imposing Troy was on the mound for the Tigers, starting against the Washington Senators. Not only was he suddenly a teammate of Ty Cobb, the greatest hitter in baseball, but Troy was pitching against the game’s best pitcher: Walter “Big Train” Johnson.

Navin Field had only opened five months earlier when on September 15, 1912, Troy toed the rubber there against Johnson. The quiet German rookie did an amazing job through six innings, holding the Nats scoreless. But in the seventh inning he surrendered dour runs before being summoned from the game by manager Hughie Jennings. Troy’s ledger read: six innings pitched, nine hits and four runs allowed while also walking three batters. The Tigers lost the game, 6-3. For Johnson it was just one of the 417 victories he would stack up in a Hall of Fame career, but for Bun Troy it was his only chance in the major leagues. After sitting on the bench for two weeks the season was over without the rookie getting another chance to toss the baseball. The next spring, despite being invited to training camp by Detroit, Troy did not earn a roster spot, though his tall figure was captured in many photographs taken by a professional photographer during workouts on March 27th.

The Adrian ballclub welcomed Troy back in 1913 and he once again won 23 games for them, logging more than 300 innings on his right arm. In 1914 he continued his efforts to get back to the big leagues and signed with Pittsfield (MA) of the Eastern Association. While he performed adequately with Pittsfield, winning 19 games, it was the last hurrah for Troy, who hung up his glove after five minor league seasons with a 77-62 record in 159 games.

As an ex-ballplayer, Troy returned to western Pennsylvania, working a series of jobs. In 1917, when it began to look like more and more like the United States would get into the war in Europe, Troy enlisted in the army. Though he was German born and his parents still spoke German in the house, Troy never thought twice about his decision to fight against his native country. His family’s migration to the U.S. had changed their fortunes, had given him the opportunity to be a ballplayer, and had made him proud to live in this country. He was an American.

Troy was a member of the 80th Division (nicknamed the “Blue Ridge Division”) of the American Expeditionary Force. Twenty-nine years old when his division sailed for Europe, he held the rank of sergeant in the 319th Infantry Regiment, Company G, which was made up of men from western Pennsylvania and eastern Ohio.

The Blue Ridge Boys battled through France in the First Battle of the Somme, and later saw action in the Battle of Saint-Mihiel. They eventually made their way to the Argonne Forest, where they waged in a fierce battle for more than a month in the fall of 1918. Some time in the first week of October, Troy was shot in the chest by German gunfire. He hung to life for a few days at a field hospital, but died on October 7. He was only thirty years old. The war was over a little more than a month later.

Troy was one of only eight former major league players known to have died in World War I. He was initially buried in France, but a few years later after much lobbying from local officials and his family, his remains were returned to the U.S. and laid to rest in Monessen, Pennsylvania. At the ceremony, which was held on August 11, 1921, a crowd of more than 1,000 were in attendance, including many veterans of the Blue Ridge Division. Troy’s remains were brought in on a caisson drawn by four black horses to Robinson’s Run Cemetery where a 21-gun salute was fired, and taps played. A mound of roses were also present, a gift from Frank Navin.

Though Bun Troy played only one game in a Detroit Tiger uniform, he was a hero who gave his life for his adopted country as a proud German American. He never gained fame as a baseball player, but he deserves to be remembered.