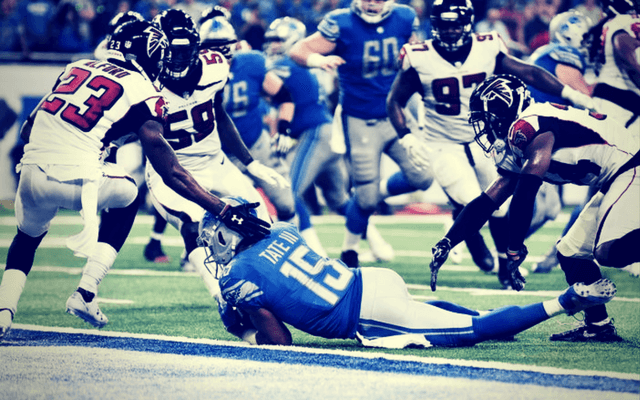 In week two when the Lions traveled to the Meadowlands and defeated the Giants handily, the critics shrugged and said, “The Giants are a bottom feeder in the league.”

With the Lions at 2-0, those same critics pointed to the week three matchup with the defending NFC champion Falcons and said, “Let’s see what they can do against a good team.”

The air has been filled with a lot of “Yeah, but’s” this season.

On Sunday at Ford Field we saw what the Lions can do against a good team. They stood toe-to-toe with Atlanta before losing on a technicality. After three weeks, can we finally admit that these are not the Same Old Lions?

Sure, the Lions didn’t win on Sunday. But they didn’t roll over against the Falcons, a team that had a 25-point lead in the Super Bowl eight months ago.

There were a few points in Sunday’s game when you thought the Lions were going to be the Same Old Lions. When Matt Ryan seemed to be driving the Falcons toward another score late in the second quarter, a score that would have made it 24-6 heading to the half,  Glover Quin stepped in with a pick-six. Not the Same Old Lions.

A few minutes later Ryan drove his team down for a field goal, and it looked like Atlanta was going to wear out the defense all day and score at will. But Matthew Stafford pulled off another before-the-half drive that set up a Matt Prater 48-yarder to make it a manageable 20-13 game at the half. Not the Same Old Lions.

On the final drive, with Stafford poised to work his Comeback Kid magic once more, Detroit was flagged for two penalties. One was a holding call that brought back a long completion. The next was an offensive pass interference call that made it 1st and 30 from midfield with about a minute to go. But on the next play Stafford fired a slant route on which the Falcons were flagged for defensive holding. Presto! First down. Not the Same Old Lions.

Twice in this game, tight end Eric Ebron dropped passes he should have caught, one of them would have probably moved the chains, and both of them helped stall the offense. The former first round pick has been roundly criticized by Detroit fans, and Stafford was visibly upset after the drops. The maligned tight end could have hung his head after those misplays. But in the final drive Ebron made a catch on the sideline, eluded a tackle, and picked up valuable yards. Not the Same Old Lions.

The last play of Sunday’s loss was weird. We’re used to that, right? We’ve seen bizarre calls cost the Lions several games in recent years. There was Megatron’s “no-football-move” negated touchdown in Chicago in 2010, or the inopportune challenge flag by Jim Schwartz against the Texans on Thaanksgiving five years ago, or the batted ball out of the end zone against the Seahawks two years ago, or the phantom pass interference call in the playoff game against the Cowboys three years ago. The Detroit Lions lead the NFL in ways to lose football games via “referee interference”.

This loss doesn’t subtract from Detroit’s performance on the field. The Lions showed that they are good enough to play with any team in their conference. The Falcons are damn good, and the Lions probably should have beat them.

The call on the field was correct, by the way. Replays clearly show that Golden Tate III was short of the goal line. By rule, ten seconds is run off the clock. Since there were only eight seconds left when the “touchdown” occurred, game over. But the rule is a bad one. Let’s hope that Martha Ford was on the bat phone to NFL commissioner Roger Goodell immediately after the game to lodge a complaint.

The real reason the Lions ended up just short of victory has to do with their offense stalling too often. Five times (out of 11 possessions), Matthew Stafford and the offense went three-and-out. It happened three times in the critical fourth quarter. Credit should go to the Atlanta defense for that, but the Lions are probably kicking themselves for wasting opportunities.

Speaking of kicking, Matt Prater is a five-toed god. The Lion kicker has made 14 consecutive field goals beyond 50 yards. This guy is in range when he’s in the locker room. He booted five field goals on Sunday and is one of the MVP’s of this young season.

The defense, which consists of several players drafted and acquired by Bob Quinn, played inspired football once again. Just when it seemed Matt Ryan and the Falcons were about to push their lead to two touchdowns in the second quarter, Glover Quin picked a pass and returned it for a score. Darius Slay had two picks, both off deflections, as the secondary kept the Lions in the game while Stafford and the offense sputtered.

The Lions were never able to run the ball on Sunday, but that’s more a testament to the Falcons defense than it is to a serious deficiency in Jim Bob Cooter’s offense. The Lions will open up the running game, especially once the offensive line gets all of their pieces back in place.

The Falcons kept Ziggy Ansah and the Lions D-Line at bay, they stopped the Lions running game, and they moved the ball for more than 400 total yards. The Lions dropped some balls and committed some silly penalties.

Yet, there they were with the ball on their own 11-yard line with under two minutes and a chance to win the game.

Right where The Comeback Kid wanted them.

But this time, Stafford was denied a last-second victory. It took the rule book to do it.