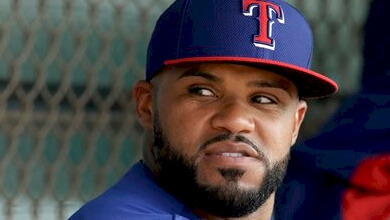 Prince Fielder was going to be the “Prince of Comerica Park,” just as Tayshaun Prince was the “Prince of The Palace” in the dozen seasons he bounced the basketball for the Pistons.

The larger Prince was going to be the missing piece that put the Tigers over the top, and helped the club claim its first World Series title since the year he was born, 1984.

However, he arguably became the largest reason — and not just because of his weight — that the Tigers failed to cash in during the 2012 World Series and in 2013 during the American League Championship Series.

Fielder’s apathetic attitude and punchless performance throughout the 2013 ALCS against the Boston Red Sox got him sent out of town and made the Tigers faithful quickly forget about the connection that the slugger had to Detroit through his dad — another formidable Tigers slugger in his day — Cecil Fielder.

The fact that the younger Fielder made his “Big Daddy” proud by hitting moonshots at Tiger Stadium as an adolescent, including one that landed in the upper deck of the historic playing field, became a distant memory as well. Very few fans shed a tear when the hulking first sacker was traded (along with his monstrous contract) for Ian Kinsler. The younger Fielder lost his status as the lovable, former baseball prodigy that was brought back to Motown by owner Mike Ilitch to follow in his father’s equally large footsteps.

By the end of his time in Detroit, the six-time All-Star became the player most likely to be booed by fans at capacity crowds in Comerica Park. He was the guy Tiger faithful loved to hate despite the fact that he was playing for the “good guys.”

At the same time, it gave former club president and GM Dave Dombrowski, who from many accounts would not have lent out the large sum of money given to Fielder in his free agent deal (nine years, $214 million), plenty of reason and ammunition to rid the team of Fielder’s albatross of a contract. Allegedly, an affair between Fielder’s wife and one of his teammates also hastened the deal.

The fans welcomed the trade of Fielder to the Texas Rangers with open arms, and perhaps reacted more positively to it than they did when Fielder was inked with great fanfare in January of 2012 shortly after the bad news that Victor Martinez would miss the entire seasons due to a knee injury.

In his current baseball home of in the The Lone Star State, Fielder seems to be more at ease than he did during his final season in Motown, and it’s showing with his season-long resurgence at the plate.

Fielder, a favorite for American League Comeback Player of the Year along with 2015 All-Stars Albert Pujols and Mark Teixeira and Teixeira’s Yankees teammate Alex Rodriguez, has re-found his stroke with a batting average north of .300, 15-plus home runs and 70-plus RBI in over 115 games played in his second season in Texas. He missed almost all of 2014 with a neck injury that further cemented Dombrowski’s status as “The Nostradamus of America’s Pastime.”

Although Prince is tearing it up at the dish with the Rangers, Tigers fans, who are suffering through a season in which the club may finish under .500 for the first time since 2008, don’t seem to miss him too much. That was apparent by the negative reaction he got on August 20 in his first at-bat at Comerica Park since being dealt to the Rangers.

It’s sad to say, but there may never be an opportunity for him to be forgiven by a large sect of Tigers fans.

He napalmed his bridge with the organization on his way out of town, and as a result the big slugger will never be remembered in the way it seemed he might: as a vital component of Tigers lore who would be enshrined into Cooperstown with the “Old English D” logo on his Hall of Fame plaque.