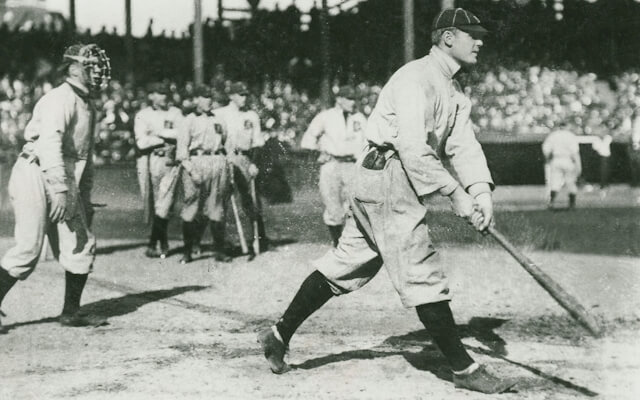 Sam Crawford was a Hall of Fame outfielder for the Detroit Tigers from 1903 to 1917 and he still holds the all-time record for triples with 309.

Everyone sat there clueless.

It was the individual finals of the Society for American Baseball Research (SABR) national trivia contest and a question went unanswered that made Detroit Tigers fans cringe in the audience.

“Who holds the record for most triples by a left-handed hitter?”

Well every baseball fan in a national trivia contest knows that Tigers legend “Wahoo” Sam Crawford has the most triples ever. Most Detroit fans and trivia buffs also know that Crawford is indeed a left-handed hitter.

So it was sort of a trick question, but one of the two finalists (this writer finished third for the record) guessed Ty Cobb and the other was silent.

Both looked completely flabbergasted after Crawford was read as the answer, feeling duped.

Yes, it’s true. Sam Crawford is a lefty and hit 309 career triples. Easily the record — a record that has stood for a century.

Later, in the team final, Crawford came up again, and again was part of what seemed like a trick question, but was not.

“What American League team did Sam Crawford end his career with?”

Most Detroit Tiger fans think he played his entire career with the Tigers but most historians know he started with the Cincinnati Reds and jumped to Detroit after the American League was formed.

But two teams of four sat silent as again many fans in the audience cringed.

The answer of course is the Detroit Tigers, where he ended his career in 1917 — 100 years ago.

Again the finalists felt flabbergasted and duped, but alas, it was not a trick question. And it proved that even in SABR, Sam Crawford is not remembered as well as he should be.

Clearly an upper-level Hall of Famer and few seem to know basic facts about him.