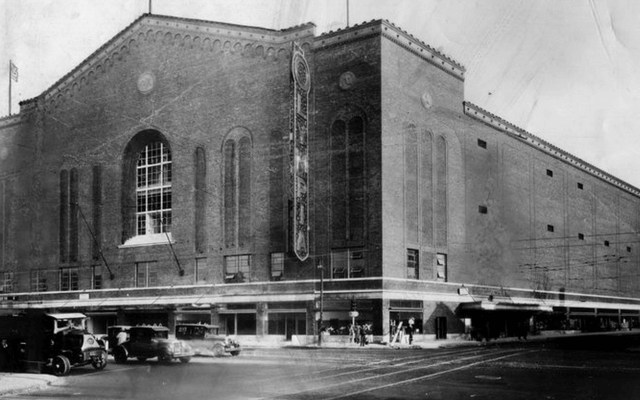 Detroit’s Olympia Stadium was a state-of-the-art hockey facility when it opened in 1927.

The building had been open for over a month, but jaws were still dropping as fans walked through the doors of Olympia Stadium for Detroit’s first-ever National Hockey League game.

The arena was both massive and majestic, soaring and yet somehow cozy. Architect C. Howard Crane specialized in theaters and movie palaces in Detroit, including Orchestra Hall, the Detroit Opera House, and later the Fox Theatre on Woodward. He designed his only sports stadium like a theater, with steep inclines that brought the seats up close to the “stage.”

After ground broke in March 1927, the building that would stand nearly six decades rose in just seven months. The six-sided structure, which stretched to fits its polygonal site bounded by Grand River, McGraw, Wreford, and Lawton streets, opened as the third largest indoor arena in the world. Rave reviews, in Roaring Twenties superlatives, poured in.

“When the doors of Olympia, the huge and palatial amusement arena and auditorium at McGraw and Grand River avenues, are thrown open to the public … Detroit will take its place with other great cities of the world in having an indoor amusement place second to none in modernity and excellence of equipment,” gushed the Detroit Free Press.

In an article headlined “Science Works New Wonders,” the Free Press marveled that the Olympia’s 14 miles of saltwater pipes in the floor could freeze a rink in just four hours, and “keep ice on the floor hard and [yet] have the seat sections of its building comfortably warm.” The Olympia’s innovative engineering enabled it to have the largest indoor ice surface anywhere.

The Olympia opened in October 1927 with a rodeo, followed by a boxing match, followed by open skating. But it was built for hockey—specifically, for the National Hockey League.

Charles Hughes, a Detroit businessman and former public relations flack for Teddy Roosevelt, bought an expansion franchise in the National Hockey League in 1926. Hughes stocked the new Detroit team with players from the Victoria Cougars of Canada’s recently defunct Western Hockey League. He kept their team name, thinking it had a nice parallel with the local baseball team, the Tigers.

All the Detroit Cougars needed was a place to play—and not just any arena, but one that would announce Detroit’s ascendance. “This is the greatest sports city in the world and it is natural that Detroit should have one of the greater indoor arenas in the world,” Hughes told the Free Press.

After playing their first season across the river at Windsor Arena (which still stands, though not for long), the Cougars made their debut at the Olympia on November 22, 1927. They faced the defending Stanley Cup champion Ottawa Senators.


The night featured plenty of fanfare. Detroit mayor John Smith presented a floral arrangement to new Cougars coach Jack Adams. The University of Michigan marching band, fresh off inaugurating brand new Michigan Stadium in Ann Arbor one month earlier, marched across the ice for the national anthems (no word on whether they were provided carpet, or skates, or something to keep them upright on the ice). The band then accompanied a figure skating company from New York to entertain the crowd between periods.

It was supposed to be a homecoming, but everything that night felt a little borrowed. The team name came from Victoria. The old English “D” on the home team’s red sweaters copied the Tigers. Coach Adams had played on the opposing Senators the year before. The team’s core fan base, such as it was, had followed the team from Windsor. Even pro hockey itself was still a novelty on this side of the Canadian border.

Still, a sold-out, standing-room-only crowd saw an exciting hockey game. Detroit’s Johnny Sheppard scored the arena’s first goal, a putaway off a rebound to give Detroit a 1-0 lead in the first period. But the defending champs countered early in the second period after a Detroit penalty, then went ahead for good midway through the third, and sat back on defense the rest of the way to win 2-1.

“Detroit got its first real taste of big league hockey and liked it,” wrote the Detroit Times.

That thinking was a little wishful, as hockey would have an uphill climb in the Motor City. Adams wrote a weekly column for the Times called “Following the Puck” to try to sell casual fans on hockey, but Hockeytown would be decades in the making. Adams complained in the early years that his team got booed in its own building by Canadian fans anytime a Canadian team came to town.

The Cougars were renamed the Falcons, then the Red Wings. They won their first two Stanley Cups in 1936 and 1937. Jack Adams would go on to become the winningest coach in Red Wings history (his mark stood until Mike Babcock broke it in 2014). The Wings would pile up five more Cups 1940s and 50s, cementing the legend of the Olympia.

This year the Red Wings open a new state-of-the-art edifice, Little Caesars Arena, a contemporary marvel with conscious links to Detroit hockey history. The new arena’s steep seating evokes the intimacy and acoustics of Olympia. The giant letters that spelled “Olympia” on the old building now are on display in the new concourse, which is lined with statues of legends who played at the Old Red Barn. The artifacts and monuments, along with the gaping jaws of fans as they walk in for the first time, are echoes of a hockey palace that opened 90 years ago.