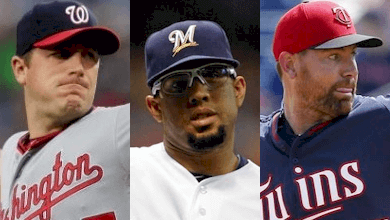 Jordan Zimmermann, Francisco Rodriguez, and Mike Pelfrey are a few of the new faces on the Detroit pitching staff in 2016.

The Detroit Tigers are performing a major overhaul of its pitching staff this season—and for good reason. Both the rotation and the bullpen needed a major fix—and the fate of the 2016 team depends heavily on how much the team improves in those areas.

It’s quite a large repair job being done. Of the 1,447 innings pitched by the Tigers last season, the men responsible for pitching 667 of them are no longer on the club’s forty-man roster. That means Detroit has to replace 46 percent of last year’s innings.

Noteworthy is that the hurler who pitched the most innings for the team in 2015—Alfredo Simon (182)—is gone. So, too, is the man who pitched the second-most innings out of the bullpen (62), Al Alburquerque. As far as Tiger fans are concerned, these two won’t be missed at all. In fact, their subtractions should be tremendous positives.

In fact, other than David Price and Joakim Soria,  let’s wave a grateful goodbye to all the other pitchers who have left the team. Collectively, those who are now departed gave up 345 earned runs last year, for a 4.65 ERA—which balloons to 5.46 if you exclude Price and Soria.

It’s easy to picture an improvement for those missing 667 innings. It’s hard to imagine doing any worse.

Maybe Jordan Zimmerman can pick up 200 of those innings. Daniel Norris, who pitched 36.2 innings last year, should give the club at least 100 more this season. And Mike Pelfrey –or whoever replaces him if he fails as the fourth starter—should log about another 160.

Bullpen finishers Francisco Rodriguez and Mark Lowe had better account for at least another 100-120—and if they duplicate their recent track records, they will certainly improve those innings tremendously.

Baseball Prospectus’s PECOTA projections have come under more scrutiny of late, and that respected publication doesn’t predict a good season for Detroit. Of course, they’re picking the Royals to be a losing team for the third straight year and they think the Rays will win the AL East, so take what they say with a large grain of salt.

Their individual projections get more respect, but they also are notoriously conservative and usually bank on regressions to the mean for most players. For what it’s worth, PECOTA projects 127 innings for Norris and 4.38 ERA; 120 innings for Pelfrey and a 4.38 ERA; 186 for Zimmerman and a 3.90 ERA; fifty-seven innings for both K-Rod and Lowe and ERAs in the 3.70-plus range for both. That’s a projected 511 more innings from these five with an ERA hovering about 4.00. That leaves 156 replacement innings to be accounted for. If Justin Verlander is healthy, he should account for nearly half of those (PECOTA projects him to pitch 207, which would be seventy-four more than in 2015).

Obviously, a lot of the staff’s success will hinge on the rest of the bullpen. Can Alex Wilson repeat his very good season? Will Blaine Hardy contribute again? And who will win this spring’s dogfight for those remaining bullpen spots? And will any pitcher emerge from the pack to be a solid No. 5 starter who gives the club 100-plus credible innings?

Whatever the answers to those questions are, they sure should be better solutions than the like of Kyle Lobstein, Tom Gorzelanny, Randy Wolf, Neftali Feliz, Ian Krol, and Joba Chamberlain. In addition to Simon and Alburquerque’s many bad innings, those other six gave us 216 mostly mediocre to awful innings last year. I’m sure the Tigers can find a way to do better with those innings this season.