Dick Bartell may have cost the Detroit Tigers a World Championship 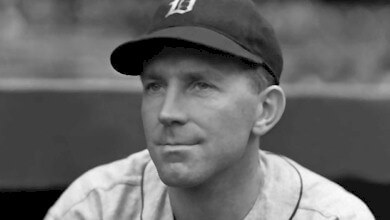 When the Detroit Tigers acquired veteran shortstop Dick Bartell in December of 1939, they got far more than they bargained for. The 31-year old had already been scooting around the infield in pursuit of ground balls for twelve seasons, and he had tasted the battle of the pennant race several times. He was also one of the most disliked people in baseball. The path that Bartell traveled to get to Detroit was a wild and “rowdy” one.

Back in the days when each league had only eight teams and there were two in Boston, two in St. Louis, two in Chicago, and three in New York, fans became very familiar with the players around the league. Each team played every other team in their league 22 times. Usually the teams met in four series in each city. In that era of familiarity, the intense and competitive Dick Bartell grew to be hated in several cities. The two places he was most reviled was at Ebbets Field in Brooklyn and in Pittsburgh, where he debuted but spent little time on the field.

The legend of Rowdy Richard

First, let’s address Pittsburgh, a franchise that went from success to misery rather quickly in the early 1930s thanks to the demise of the Dreyfuss family. The Pirates had been a formidable team in the National League since the early days of the agreement between the two rival leagues in 1903. They won pennants in 1901 and 1902 and in 1903, then again in 1909 behind their superstar Honus Wagner, who like team owner Barney Dreyfuss, was a German. The Bucs won pennants again in 1925 and 1927 when they fielded one of the most exciting offensive teams of that era. But as Dreyfuss grew long in the mustache, he started to slip, and controversy hounded the team. Managers fought with players, stars refused to follow directives from the managers, and teammates fought teammates. It was in this atmosphere that young Bartell signed with the Pirates after distinguishing himself on the ball fields of his native southern California.

Bartell was high-strung, the sort of guy who needed to be wound very tight in order to do his best on the field. He rubbed the veterans on the team the wrong way and he bristled as management reigned him in. Dreyfuss had an office at Forbes Field that looked down in the field, and he had this habit of sending an errand boy down to the diamond to retrieve one of his players with a note. “See the Boss” would be written on the note, and when the player stood on the carpet, still sweating in their wool uniform, Dreyfuss would berate them about some bad play or lapse in judgment in the previous day’s game. That sort of negativity wore on the members of the Pirates, and Bartell couldn’t wait to get out from under the thumb of Dreyfuss.

At the winter meetings in 1930, Dreyfuss traded his disgruntled shortstop to the Phillies, which was like being sent to Siberia after getting frostbite. It was the first of four times that “Rowdy Richard” would be traded at the winter meetings. Things got worse for the Pirates after Bartell was traded, the Dreyfuss son, the one pruned to take over the baseball business died prematurely, and a few years later, Old Man Dreyfuss died. The team was shifted to the control of a son-in-law who did all the bad son-in-law things. The Pirates didn’t win another pennant for nearly three decades.

In those days when a ballplayer had troubles with the front office, the newspapers always sided with the owners. As a result, Bartell was booed the rest of his career in Pittsburgh. He played another 13 years in the National League, so that was a lot of boos.

As for Brooklyn, Bartell earned his villainous reputation at Ebbets Field through his play on the diamond. Whether he was in a Pittsburgh uniform, or wearing the wools of the Phillies, or later as a member of the Cubs and the Giants, Dick Bartell was a favorite target of insults in Flatbush. One year, Bartell spiked Tony Cuccinello, the popular Dodgers’ second baseman. Another time he ran over third baseman Joe Stripp, setting off a brouhaha that saw the fans hurl bottles and fruit onto the field. He spiked Joe Judge at first base and Judge later claimed it was intentional, and he and Brooklyn second sacker Lonny Frey had a fight at second base at Ebbets Field. Over the years, Brooklyn pitchers plunked Bartell with pitches 19 times, the most of any team by far. Once, a Brooklyn hurler tried to hit Bartell with four consecutive pitches, but he missed each time as Dick spun his way out of harm.

Bartell had a long-running feud with Billy Jurges of the Cubs, who appears elsewhere on this list. The two traded punches a few times, then at the 1938 winter meetings the Giants traded Bartell to the Cubs in a six-player deal that sent Jurges to New York. Bartell later returned to the Giants in the 1940s and he was still booed in Brooklyn and Pittsburgh.

After the 1939 season in December, Bartell was sent packing again as the Cubs traded him to the Tigers in a one-for-one swap of veteran shortstops. The Cubs got Billy Rogell, a 35-year old rah-rah guy who had manned the position for a decade in Detroit but was starting to show signs of age in the field. Bartell was 32 years old and with his third team in three years. The Tigers inserted him in the leadoff spot in front of their big guns, Charlie Gehringer, Hank Greenberg, and Rudy York. Detroit won the pennant even though Bartell had a bad season. The World Series went to a seventh game, it was a tight contest between Detroit and Cincinnati. The Tigers led 1-0 in the seventh when their leadoff batter, Frank McCormick, hit a double. The next batter, Jimmy Ripple, slashed a ball down the left field line that Bruce Campbell nearly caught, but instead the ball caromed off the wall and landed at his feet. The quick rebound helped Campbell get the ball back in to Bartell, the relay man. McCormick, a slow runner, was barely around third base when Bartell received the ball. “I was yelling ‘Home! Home! Home!” second baseman Gehringer said, “but [Dick] never threw. To this day I don’t know why.”

Cincinnati won the game 2-1, and Bartell’s failed relay throw was the story of the series. His “freeze” at short was famous until six years later when Johnny Pesky made a similar gaffe and that play became more remembered in baseball history.