When “the other” Eddie Murray kicked for the Detroit Lions 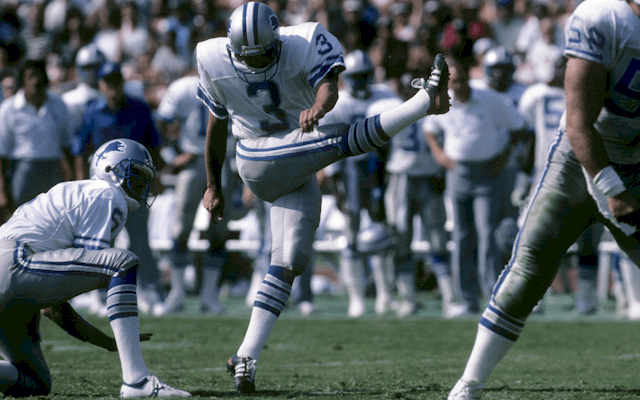 Growing up outside Detroit in the 1980s, was not the best time to be a Detroit Lions fan.

Being too young to know their 1983 division title, I grew up in the era of seven consecutive losing seasons.

In fact, I didn’t even know about the Lions until the late 1980s. If I wanted to watch football, it was Michigan.

Meanwhile, I watched plenty of baseball and frequently visited Tiger Stadium, since the Tigers were having a great decade.

So when I finally watched my first Lions game at age 7 or 8, I just couldn’t believe that Eddie Murray was their kicker.

How could Eddie Murray be kicking when I saw him play first base at Tiger Stadium the day before (OK, it might have been the week before)?

I was not the only child of the ’80s to scratch their head about that.

Yes, the 1980s saw two Eddie Murrays rise to stardom. Of course the Eddie Murray I was used to watching was the Baltimore Orioles slugging first baseman.

That Eddie Murray was an eight-time All-Star, including six times in the 1980s. He was on his way to becoming just the third player in baseball history to reach the 500 home run and 3,000 hits milestones. He was a well-rounded superstar having won three Gold Glove awards and the Rookie of the Year in 1977.

Three years later, the other Eddie Murray had a tremendous rookie year with the Detroit Lions. He played in all 16 games, made 35 of his 36 extra point attempts and had a banner season kicking field goals. He made a league-best 27 field goals on the season and attempted a league best 42.

That isn’t the greatest percentage (64), but must of his misses were longer than 40 yards. His 27 makes in 1980 still led the NFL and he earned his first of two trips to the Pro Bowl and was named the kicker on the NFL All-Pro First Team that season.

He started the ’80s with a bang, and ended them with a bang, too, identically duplicating his 20-of-21 performance for a 95 percentage, this time with a long make of 50. He made his second and final trip to the Pro Bowl.

Murray would have two more seasons in the Silverdome, both with percentages of 68.

He wasn’t the best kicker in the NFL for the decade of the ’80s, but he was for the first and last year of that decade.

While he was no first-ballot Hall of Famer like the other Eddie Murray playing during that time, he proved there were two Eddie Murrays to remember.