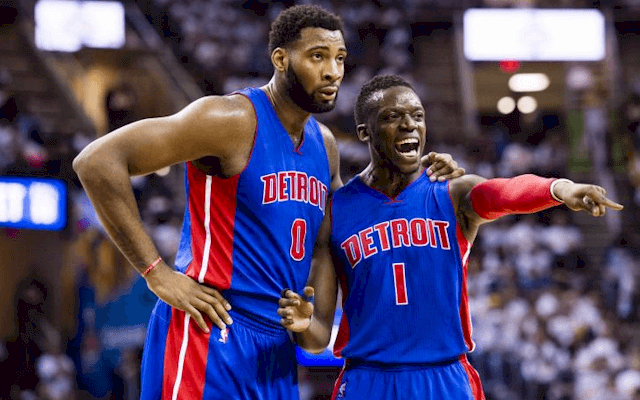 Will Andre Drummond and Reggie Jackson be teammates much longer or will one or both of them be traded by the Detroit Pistons at the NBA trade deadline?

All of the above words can describe the Detroit Pistons’ season at the All-Star break, with the NBA trade deadline looming on Thursday.

Expectations coming into the season were high, as expressed in this blog space when yours truly predicted a 50-win season out of the Stan Van Gundy-led franchise.

A 50-win campaign is highly unlikely at this point, with Detroit standing at 27-30.

With the NBA season consisting of 82 games, it means the Pistons would have to go at least 23-2 the rest of the way to finish with 50 victories. Simply, it isn’t going to happen.

It also appears highly unlikely that Detroit will grab anything better than a six seed in the Eastern Conference, which sets up a first-round matchup with and probable KO from the Boston Celtics, Washington Wizards or Toronto Raptors.

So, what should Van Gundy and the Pistons do before the 3 PM Thursday deadline?

Options are aplenty, as the Pistons could literally start over by trading both Reggie Jackson and Andre Drummond.

Or they could start tearing things down more slowly by trading one of those two.

Drummond has had free-throw shooting problems his entire career, which have taken him off the floor in crucial, late-game minutes. It’s also become apparent this season that backup point guard Ish Smith has been more valuable than Jackson, at times, down the stretch of games. What does this add up to?

The answer is that either Jackson or Drummond has to be dealt.

The Pistons aren’t winning an NBA title anytime soon. Van Gundy’s team isn’t even capable of making the Eastern Conference Finals, even with both on their roster.

The only problem with attempting to trade either player is the ludicrous money that they are being paid.

And when I say ludicrous money, remember that Jackson is almost making $15 million this season, while the Pistons made Drummond the richest player in franchise history last summer when they signed him to a five-year, $127 million contract. That’s more than $25 million per year for Andre.

Those salaries far outweigh both players’ on-court production, which can be solid at times.

Drummond is a masterful rebounder, with 13.8 rebounds per game — tied for the second-highest per game mark in the league.

As for Jackson, he’s still a player that can get hot and score buckets at a premium rate during significant portions of a game.

However, due to their respective contracts, the Pistons will likely have to take back a bad contract in a trade for either guy, which isn’t an optimal situation. Unless, of course, the rest of the deal consists of young talent that the Pistons can build around for the future. In such a case, Van Gundy & Co. will gladly take back a player who is overpaid.

Jackson missed Detroit’s first 21 games and is having a down season statistically, most notably when it comes to his field goal percentage, 2-point FG percentage and player efficiency rating, which means his trade value isn’t where it was this past offseason.

It’s why Van Gundy would be wise to hold on to Reggie for the time being.

Then, if the Pistons are again struggling as they head into the deadline next year, a healthier Jackson, who should be expected to have a bounce-back campaign, can be used as the squad’s main trade chip.

As for Drummond, this is probably the best time to trade the big mane. The 23-year-old’s numbers this season stack up well with his career norms.

Also, now that DeMarcus Cousins has been shipped off to the New Orleans Pelicans, Drummond is the best center available leading up to Thursday’s deadline.

The Pistons are likely hoping that the teams that missed out on Cousins (LA Lakers anyone?) have now become so desperate that they will do anything to grab Drummond.

If opposing front offices do become desperate, the Pistons might make headlines Thursday with the kind of deal that could re-energize the franchise as it moves downtown into Little Caesars Arena for the 2017-18 campaign.

I’ve got to believe that Van Gundy is holding out hope that he can deal one of his two young stars. And if an overwhelming offer comes SVG’s way, you can say goodbye to Drummond in a Pistons uniform.