Face masks were still a novelty in 1953 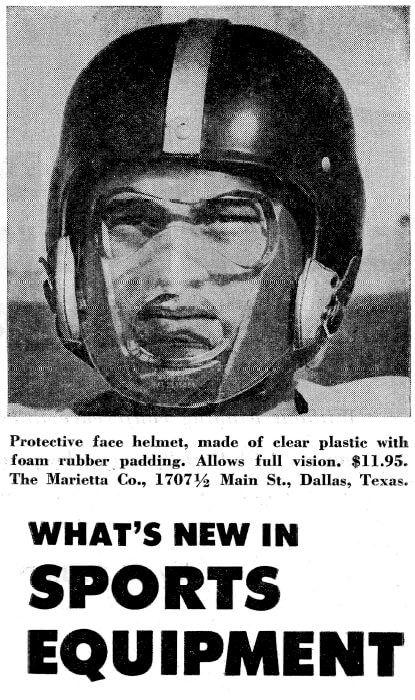 This advertisement from 1953 shows a very different sort of face mask than we see in the NFL today.

What’s new in sports equipment, football fans? Well, in 1953, it was this odd-looking “protective face helmet, made of clear plastic with foam rubber padding.” As the manufacturer’s advertisement stated, the masked headgear “Allows full vision” and costs $11.95—a small price to pay for peace of mind.

Better peace of mind than pieces of your face, right? Well, Doak Walker really didn’t think so, no matter what he advocated in his advertisements for the Dallas-based Marietta Company. While the Detroit Lions’ star halfback endorsed face protection for others, he personally disdained it.

The Doaker wasn’t alone. Up through the mid-1950s, nearly all helmets worn in the National Football League were open-face. Any player wearing a mask did so temporarily, when he was recovering from a broken nose or jaw or some other facial injury. These makeshift masks usually were bars made of wire wrapped with layers of tape and leather, though some players wore a close-fitting plastic mask like the one pictured here. In 1955, Riddell—the company that had pioneered the use of plastic helmets in 1939—worked with Cleveland coach Paul Brown to create a new face mask that was a single bar made of rubber and plastic.

Beginning in 1955, all NFL players were required to wear a face mask, though individuals could ask for special permission from the commissioner to play without one. The reason, of course, was increased visibility: even a single bar across the face might obscure a player’s vision at a critical moment. (It should be noted that, at the time, all goalies in the National Hockey League also disdained masks.)

The last Lion to regularly play without a face mask was Bobby Layne, who left Detroit early in the 1958 season and continued to wear an open-face helmet with Pittsburgh until his retirement in 1962. However, some regulars who doubled as punters, kickers, and holders had a second helmet they used strictly for special teams. There are game-action photographs of Yale Lary and Pat Studstill wearing a special open-face helmet while punting, and the Lions’ 1969 highlight film shows Wayne Rasmussen holding for placekicks without a face mask or even a chinstrap.

The last every-down players to regularly play with an open-face helmet were Tommy McDonald, a feisty little end who concluded his 12-year Hall-of-Fame career with Cleveland in 1969, and defensive tackle Jess Richardson, who quit playing for the Boston Patriots in 1964. Remarkably, Richardson never lost a single tooth in a dozen pro seasons—though he did have his nose broken at least 10 times!