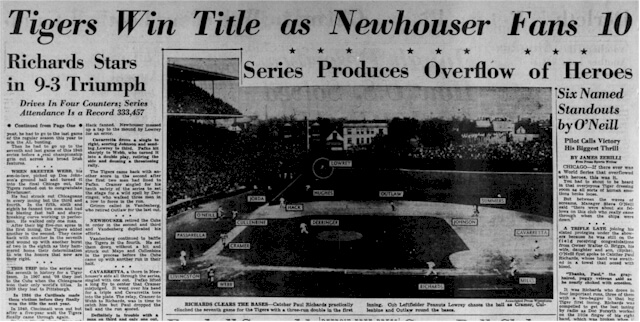 It had been an incredible two years for Hal Newhouser, the Detroit Tigers’ flamethrowing lefty.

Now here he was, standing on the mound on a warm, sun-splashed afternoon at Chicago’s Wrigley Field.

Game Seven of the World Series.

Just over a week ago, his Detroit Tigers had won the American League pennant in dramatic fashion in the final game of the regular season. Hank Greenberg’s ninth-inning grand slam was the clincher at a drizzly Sportsman’s Park in St. Louis.

However, it would all prove for naught if the Tigers could not prevail against the Cubs.

Detroit’s hopes were hinging on the powerful arm of the team’s 24-year-old hometown ace known as “Prince Hal.”

Back in Game One, he had been rocked to the tune of seven earned runs in less than two innings of work. He pitched much better in Game Five, picking up the victory in a complete-game 8-4 decision.

Game Seven, however, was what separated the men from the boys. With all the pressure on him, and with a jam-packed Wrigley making more noise than he had ever heard, Newhouser was ready for the challenge.

Opposing him on the hill was Hank Borowy. Winner of 21 games in 1945, he posted a dazzling 11-2 mark, with a 2.13 ERA, after the Cubs had purchased him from the Yankees in late July.

Borowy had been a mixed bag so far this October, however. He shut out Detroit in Game One, but lasted only five innings in Game Five, surrendering five runs, as the Tigers took a 3-2 lead in the Series. It was all hands on deck for the Cubs in Game Six. Manager Charlie Grimm used three relievers, including Borowy, who entered in the top of the ninth of a 7-7 tie. The righty blanked the Tigers for four frames, getting the win on Stan Hack’s 12th-inning double.

After an off day, Borowy barely had time to catch a breather before Grimm sent him out to start Game Seven. But the pitcher was gassed, and would prove to have a short leash. The Tigers drove him from the mound in the opening inning with three consecutive singles before he could retire a batter. Paul Derringer was brought in to replace him, and by the time the inning was over Detroit had put five runs on the board.

Newhouser had himself a nice cushion to work with, and spent the afternoon toying with the Cubs. He went the distance, scattering ten hits (the most he had given up all year), striking out ten, and issuing only one walk. When Tigers’ shortstop Skeeter Webb scooped up a Don Johnson ground ball and tossed it to Eddie Mayo at second for the force out that ended the game, the Tigers had themselves their first World Series championship since 1935, and just their second ever.

Newhouser was dominant in the 8-3 win. His fastball, coupled with a sharp-breaking curve, was too much for the Cubs. His performance against the NL champs gave him two wins in the 1945 World Series, and he established a new Series record with 22 strikeouts.

Later that evening, a jubilant crowd began to descend on the old Union Station in Detroit, awaiting the return of the city’s conquering heroes. By the time the bells and whistles announced the arrival of the Tigers’ train early Wednesday morning, an estimated 10,000 folks were ready to give them a hearty welcome. Wrote the Detroit Free Press, “Bobby-soxers made up a goodly portion of the crowd. They waved pennants, blew horns and raised a hullabaloo with a wide variety of noisemakers.” The newspaper was quick to point out, however, that the revelers were “extremely orderly.”

Making their way through the crowds, the triumphant Tigers clambered into cabs and made their way to the Book-Cadillac, the Detroit Leland, the Fort Shelby, the Statler, and other hotels where private parties were well underway. The crowd favorite was Newhouser, the tall ace from Detroit.

For their efforts, each Tiger receiving a full World Series share pocketed $6,445 (roughly $87,000 in today’s money).

Newhouser won the American League’s Most Valuable Player Award in 1944 and 1945. He remains the only pitcher to take home the trophy two years in a row.