Firing Ausmus doesn’t make sense for the Tigers, and here’s why 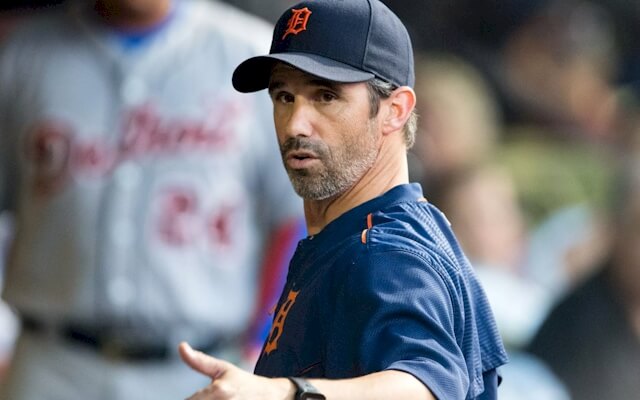 Brad Ausmus has a .516 winning percentage in three-plus seasons as manager of the Detroit Tigers

The Detroit Tigers have no incentive for firing Brad Ausmus, even if that’s what they should do.

By the way, that’s what they should do. Fire him. But the front office has good reasons not to take that action, and I’ll outline them here.

Al Avila doesn’t want “his man” in the dugout

Tigers General Manager Al Avila was elevated to his position after the abrupt dismissal of Dave Dombrowski late in the 2015 season. Let’s be honest about that move: Mike Ilitch lifted Avila into the role because the team owner had a tantrum. After Dombrowski (wisely, mind you) dumped players at the trade deadline, Ilitch reacted rashly. He jettisoned the best GM the Tigers have ever had (and currently the best in the game) and picked the next nice guy he had sitting in the front office, the only other guy who had any experience doing anything close to the role of GM. At the press briefing announcing his hiring, Avila was all smiles and Ilitch was steadfast in his belief that his new man was “the right man” for the job.

Avila is a nice man, for sure. But he’s not anyone’s first choice for building a championship baseball team. None of the other 29 MLB teams would seriously consider hiring him for the main job. He was an apprentice to Dombrowski in name only. Trader Dave ran the show. He made the decisions. Avila’s placid performance in his 20 months on the job show that he’s out of his element.

Which brings me to this point: Ausmus was hired by Dombrowski after the 2013 season. The current Tiger skipper is not Avila’s man. If Al replaces him (especially in midseason), he opens himself up to criticism. Right now, he can stick with the status quo and deflect any pressure.

Mike Ilitch passed away in February, leaving behind an amazing legacy in Detroit. The Fox Theatre, Olympia Entertainment, Little Caesars, the Red Wings, and the Tigers, to mention the highlights. His generous philanthropy also helped the city tremendously. But his death has left the status of the Tigers in doubt.

It’s important to remember that Mr. Ilitch was the one who wanted to own the Tigers. His family was never passionate about the game of baseball and the business aspect of it. Their focus was, and always has been, on Little Caesars, the Red Wings, and other business. Mr. I was the driving force behind the commitment to the Tigers. Now that he’s gone, what will become of the team? Will it be sold?

Christopher Ilitch is the president of the parent company that owns the Tigers and the other family holdings. He has effectively succeeded his father as the top dog. What does Chris I plan to do with the team now? There are many reasons to sell: the club has just emerged from a great run (four division titles and two pennants in a nine-year span through 2014); the payroll is nearly $200 million, most of it owed to players on the bad side of their careers; and the economics of baseball are always difficult to navigate. Add to that the fact that Detroit fans are most likely suffering from “fan fatigue” after so many postseason runs and near-misses.

Attendance is down in 2017, the team missed the postseason in each of the last two seasons, and yet the payroll ranks in the top three in baseball. What would make the best sense for ownership? To fire their manager? To gut the team and stink for a few years? To announce a rebuilding project?

In addition, the Ilitches are distracted by the final stages of the construction of a new hockey arena in downtown Detroit. They don’t need a sticky mess with their baseball team while they try to retool their hockey club.

If the Ilitches plan to sell the Tigers, destabilizing the franchise is the last thing they’d want. Firing their manager in the middle of the season would signal a shakeup, an unsettling foundation to a valuable asset.

When’s the last time the Tigers admitted a mistake? Remember the Jhonny Peralta Affair? Even after the Tiger shortstop was suspended for 50 games for steroid use, the team welcomed him back for the postseason, they didn’t have many harsh words. How about when Joe Nathan made an obscene gesture toward fans? He kept his job as closer. This is the same team that stubbornly stuck with Jose Valverde. Admitting a mistake is not their strong suit.

The current manager seems to relish his defiance in the face of questioning. When the media asks about his lineup choices, he clenches up. When they question his bullpen usage, he sets his jaw and defends his players. When his team plays inconsistently (like they did last season until getting hot in August), he explains that he is privy to information that the fans and media are not. “We know better than our critics.” Ausmus displays an “us against them” mentality. That philosophy does not originate with the skipper, it runs downhill from the front office.

Even if the general manager was more seasoned and invested in making sweeping changes, even if ownership was sure they wanted to keep the team, the Detroit Tigers would not fire a manager in the middle of the season. It would mean they’d have to admit something was wrong. It would require guts.

Want to know how committed to every decision the Tigers are? Earlier this season Avila told reporters that Ausmus was not a “lame duck” even though his contract will expire at the end of this season. Why even comment on such claims? Do you think the Yankees or Red Sox or Cubs would say such things? No, because those organizations are about winning, no matter what. They want their manager to feel the pressure to win.

Which is why Brad Ausmus will keep his job for the rest of this season, whether it’s the right thing to do or not.