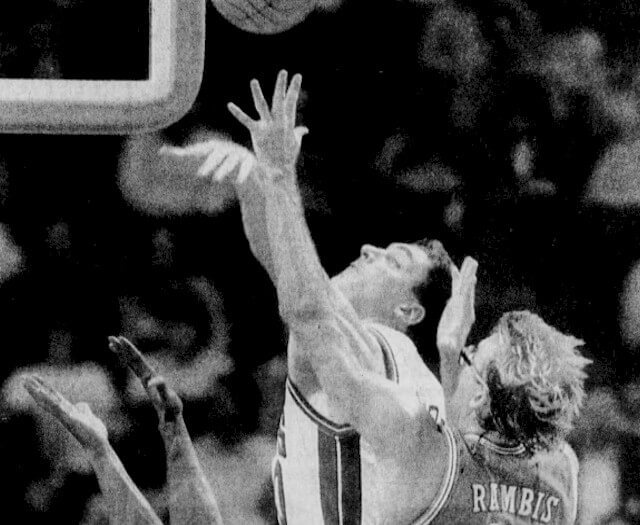 Bill Laimbeer battles for a loose ball with Kurt Rambis of the Charlott Hornets during the first game at The Palace of Auburn Hills on November 5, 1988. Detroit won the game, 94-85.

This is the first article in a series that looks at the greatest moments in the history of The Palace of Auburn Hills, home to the Detroit Pistons since the 1988-89 season. The team will leave the arena at the end of the 2016-17 season.

There were thousands of people with tickets for the first game at The Palace of Auburn Hills who missed the opening tipoff. The reason? A traffic jam near the new venue.

The date was November 5, 1988, and Pistons Fever was an epidemic. Hopes were sky high.

“It doesn’t matter what we do [in the regular season],” third-year forward Dennis Rodman said after the first game at The Palace, “all everyone wants to talk about is title, title, title.”

It was understandable: just five months earlier the Pistons had come within one win (actually one defensive stop) of winning the NBA title in Los Angeles. Now, with one more year of experience, a loaded roster of players in their prime, and a brand-spanking-new arena, they were poised to become champions.

But first things first. They had to christen The Palace, a gleaming building built for greatness by team owner Bill Davidson.

“Welcome to your new home,” Davidson told the crowd in a pre-game ceremony at half court. “This is your home and your team.”

The team was beloved. Led by mercurial point guard Isiah Thomas, a lightning fast ball handler with an impish smile and an assassin’s  heart, the Pistons had a deep stable of talent. There was Bill Laimbeer, the other team leader, a wide-bodied rebounder with a fine outside shot and an obsessive will to win at all costs. His penchant for using his elbows and hips to fell opposing players in the paint made him the most hated man in the NBA. Then there was Adrian Dantley, a low post scoring machine with spin moves and a fall-away jumper for the ages. And Joe Dumars, Dantley’s protege, a quiet #2 guard who blanketed Michael Jordan and other scoring threats with smothering defense and scored frequently with his rainbow jumpers. And Rodman, a freak of an athlete who had a motor that never stopped and could jump out of the gym. Plus John Salley, a shot blocker with long arms and a big mouth, and James Edwards, he of the unblockable fade away shot. Lastly, the Pistons boasted one of the most lethal scoring machines in the league: Vinnie “The Microwave” Johnson, who used his long arms and springy legs to propel his line drive jump shot to the hoop. More often than not he broke the hearts of enemy teams with his scoring bursts.

Those “Bad Boys” were led by the most dapper leading man of the bench: head coach Chuck Daly. With his well-coiffed hair and impeccable suits, Daly strolled the sidelines with a steady calm that served as the rudder for a team that relied heavily on emotion and brute confidence. While Isiah was the monster of the hardwood, Daly was the Dr. Frankenstein.

Ironically, the first bucket was scored by Kelly Tripucka, a former Piston making his return to Detroit as a member of the expansion Charlotte Hornets. Dantley and Tripucka squared off in several one-on-one matches throughout the game, which Detroit won 94-85. Rodman admitted later that the team was tired after having met and defeated the Bulls in Chicago the previous night. After vanquishing Jordan and his supporting cast, the Hornets seemed like a disappointing dessert to the hungry Pistons.

Dantley was deadly efficient, going 7-for-8 from the floor and scoring a team-high 18 for the Pistons. Rick Mahorn, another weapon in Detroit’s arsenal, pulled down 11 boards, scored 13 points, and blocked two shots as he commanded the interior. With Laimbeer (14 points and 12 rebounds in the first game at The Palace), Mahorn formed an immovable force in the paint for Daly’s team, which was built around the philosophy of “defense first.”

But even on that opening night in their new home, Daly and general manager Jack McCloskey could see there would be struggles with their rotation. The key problem was how to get more minutes for Rodman, who was emerging as the best defender and rebounder in the league. A second-round draft pick two years earlier out of little Southeastern Oklahoma State University, when Rodman entered the game he injected energy into the team. His feverish play at both ends of the court and his slippery moves to grab loose balls earned him the nickname “The Worm.” Three and a half months later, McCloskey would solve his problem when he traded Dantley to the Mavericks, clearing the way for Rodman. The trade shook up the Detroit squad, which was in second place, three games behind the Cavaliers at the time. But after the deal, which Dantley criticized as being orchestrated by Thomas, the Pistons went 31-6 to earn the top seed in the Eastern Conference. Eventually, of course, they won their first NBA title.

The first game at The Palace was a precursor to a remarkable season for a remarkable team. It culminated in their first NBA Finals win and a year later they added a second. The Pistons will soon abandon The Palace, but the memories of their championship seasons in that building will love forever.