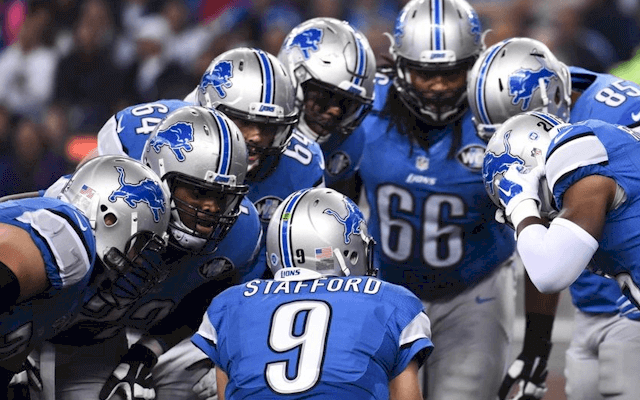 Matt Stafford and the Detroit offense have been able to pull a rabbit out of the hat so far in 2016.

The Detroit Lions are mediocre despite their 7-4 record and their spot atop the NFC North division.

Yes, I used the “M” word. Before you start cringing at the idea of the Lions being described as such, give me a chance to explain myself.

Let’s start with this: After the Lions’ win on Thanksgiving against the division rival Minnesota Vikings which required yet another fourth-quarter comeback, the Lions ranked no better than 14th in any of the major team defensive or offensive stat categories (14th in passing yards allowed and total yards allowed per game).

That defines a team which is strongly overachieving and more middle of the pack than top of its class.

The Lions also have a non-existent ground game, ranking 30th in the league out of 32 teams with a middling 80.8 rushing yards per game. Of course that’s not Barry Sanders-type production, heck it’s not even Kevin Smith or Kevin Jone levels.

They’ve rushed for 100-plus yards as a team only twice, which happened in the first two weeks of the season against the Indianapolis Colts and Tennessee Titans, respectively. Both 100-plus yard games on the ground came when second-year pro Ameer Abdullah was the Lions’ lead back, which is a role he maintained until suffering a foot injury against the Titans.

Jim Caldwell’s squad has not had a back eclipse the 100-yard threshold in a single game all season long.

It got so bad in Week 11 against the Jacksonville Jaguars that former Notre Dame back Theo Riddick ended up leading the Motown ground attack with 13 yards. And to make matters worse, Dwayne Washington totaled six rushing yards on 13 carries, good for a pathetic yard per carry average of below one (0.5).

If you thought that was bad, here’s another stat that will make you want to vomit whatever you just ate: the Lions’ leading back has totaled under 50 rushing yards in seven games already this season. And the most yards any back has totaled this season came in week nine when Riddick accumulated 70.

That’s not a mistype. The most yards that a Lions back has compiled in one game all season long has been the big 7-0.

In contrast, opponents have gashed the Lions’ defense for 100-plus rushing yards six times this season, and one of the two backs that has single-handedly done so is nothing to write home about.

I’m not talking about the Chicago Bears’ Jordan Howard, who did so in Week 4 with 111 yards. Instead, I’m talking about the often overweight and injury-prone Eddie Lacy of the Green Bay Packers. When Lacy is rushing for 103 yards against you (as he did during Week 3), you know you’ve got issues with stopping the run.

Then, there’s the unsustainable way of winning that the Lions have adopted: coming from behind in the last moments. They might’ve been able to do it twice against the offensively hapless Vikings as well as once versus the defensively challenged Colts, the potentially free-falling Philadelphia Eagles and the eternally lowly L.A. Rams and Jacksonville Jaguars.

And yes, I know they’ve also pulled off the trick on a good Washington team, but check out their team stats defensively. Once you take a good look or two at the numbers, you’ll see that Washington ranks toward the bottom or toward the middle of the league in nearly all defensive categories.

As you can probably tell from the above, Matt Stafford, the king of the fourth-quarter comeback, and the Lions haven’t been significantly challenged yet.

Stafford, now with seven fourth-quarter comebacks to his name this season, has tied the Manning brothers, Eli and Peyton, for the most recorded by a QB in a single season. Peyton set the mark in 2009, and little brother Eli tied the mark in 2011.

It speaks volumes about Stafford’s play this season, and has made him a legitimate MVP candidate. Yet, the Lions can’t keep relying on Stafford to bail them out when defeat is staring them square in the face, especially with the tough road they have going forward.

Appearing first on Detroit’s radar is a team that has been unable to stop the opposition forever: the New Orleans Saints. Yet, it must be remembered that the Saints possess a nine-time Pro Bowler and Super Bowl MVP under center in Drew Brees, who is throwing the pigskin for prolific numbers yet again (30 touchdowns and only eight interceptions).

And where does the Saints’ offense operate most efficiently? At the Mercedes-Benz Superdome, which is where the Lions will meet them for an early December matchup.

My advice for the Lions: Don’t get into a shootout with Brees and the Saints. Because if you do, you will lose.

After the Lions play the Saints, Detroit’s remaining schedule doesn’t get much easier despite a meeting with the rival Bears (2-9), who sit in last place in the NFC North, at Ford Field in Week 14.

Let’s just say the Lions don’t receive any sort of special holiday treatment with how their last three games were scheduled by the league office.

Detroit goes on the road to face the top two teams in the NFC East in back-to-back weeks, the N.Y. Giants and Dallas Cowboys, in Weeks 15 and 16, respectively.

It presents the Lions with a potential doomsday scenario headed into Week 17: Being 8-7 and having to beat Aaron Rodgers and the Packers to win their first division title since the year I was born, 1993.

Can the Lions realistically win in come-from-behind fashion against the Packers in the last week of the regular season at Ford Field to clinch the division? More than likely no, even though Detroit will possess home-field advantage for the game.

It’s been a true home-field advantage for Caldwell and the Lions so far this season, too, with five of their seven wins having come at home.

But the Lions cannot rely solely on winning at home to return to the postseason. Even by taking care of business against both the Bears and the Pack at home, it might not be enough to capture the division crown or advance to the playoffs.

It’s why winning at least one of those road contests is so vital for Detroit’s playoff hopes.

And in order to win one of them as well as three of its final five games, Detroit cannot rely upon Stafford’s right arm to continue to do all the late-game heavy lifting. It also cannot be void of a running game.

While it might be hard to believe that the Lions could still finish with a disappointing 8-8 record, it’s a possibility due to the Lions being a mediocre team, despite what their 7-4 record might lead you to believe.