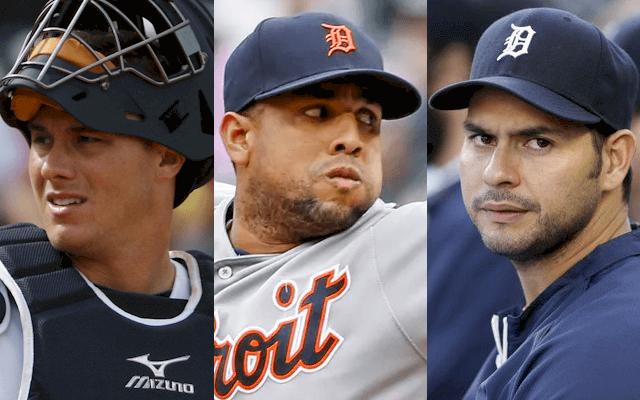 Catcher James McCann, reliever Francisco Rodriguez, and starting pitcher Anibal Sanchez each have to step up in the second half for the Detroit Tigers.

Count me among those who didn’t think this Detroit Tiger team could be a contender this year after a sluggish first three months of the season.

But based on their play since the All-Star break, the Tigers look like a favorite to claim a playoff spot. Their 15-7 record since coming back from the break leaves them in an excellent position to catch one of the three teams in front of them in the postseason race: the Indians, Blue Jays, and Red Sox.

Given the way the offense, pitching, and defense have been working in unison of late, the Tigers should be a favorite to at least grab a wild card spot, if not supplant Cleveland at the top of the American League Central. After four straight division crowns from 2011-14, this is a team that believes first place is theirs.

With seven weeks to go in the season anything can happen however, even a reversal of fortune. It appears as if this team of mostly veteran players took the opportunity at the four-day midseason break to fortify their resolve and ask themselves if they were going to fold or fight. For that, general manager Al Avila must be thankful, as it made his job much easier. No need to make the hard decision to be sellers at the trade deadline. But even so, the Tigs checked their hand at the deadline, pointing out that the return of Jordan Zimmermann and J.D. Martinez from the disabled list was like adding two new players.

Zimmermann has already plopped back on the DL after less than two innings in his first start back, but J.D. has won two games — one with lumber the other with leather — in less than a week back with the club. His presence will make the red-hot Detroit lineup even more dangerous.

In addition to Avila, manager Brad Ausmus is also beneficiary of the second half tear by the team. While it’s unlikely that the Tigers would have fired Ausmus even if they limped into the second half, the inspired play can’t help his chances to earn an extension. The Tigers have an option in 2017 on Ausmus and it’s extremely likely they’ll exercise it at season’s end. It wouldn’t be shocking if they announced an extension before the year was out, but Mike Ilitch usually doesn’t like to make such decisions about his baseball people during a season.

If the Tigers are going to capture another division title or claim their fifth postseason appearance in six years, here are the five players who will be most important in the next seven weeks.

A no-brainer, right? Yes, so I’ll get it out of the way first. Miggy has to be the very good Miggy we’re seeing right now or at least be able to drive the ball and hit home runs. Currently, Cabrera is on a pace to hit his most homers since his last MVP season (2013). The big guy can win batting titles even when he’s 80% of his normal self (think about how amazing that is), but in order to bring this team to where they need to be, Cabrera must be able to strike fear in opposing pitchers with his power. All indications are that Miggy is fully healthy from head to toe. He’s rested and rejuvenated after the All-Star break and he’s hitting the ball very well. I expect Cabrera to not only have a great August and September, but don’t be surprised if he hits himself into MVP consideration. A .330 season with 35-40 homers and 110+ RBIs and 100 runs scored will get him a lot of attention, especially if Detroit stays hot and gets into the playoffs.

A very solid first half (only two blown saves) has disguised the fact that the Tiger closer is a one-pitch pony. He has a great changeup (eight out of ten games), but his other pitchers are average at best. If KRod has trouble with his location, watch out, he’s very hittable. You can tell that the righthander doesn’t trust his secondary pitches over the strike zone — he pitches to the edge of the plate. And a pitcher who has to have perfect location to be effective is like a tightrope walker on a windy day: something bad is probably going to happen.

I’d like to see Rodriguez get a little less work in the second half. Of course that may be difficult if the Tigers continue to play a lot of close games. In a recent stretch five of their seven wins were by one-run. But Ausmus has to let some other pitchers get big outs late in games, because Rodriguez, who is a shade under six feet tall, will tire if he’s used as much as he has been lately. He’s currently on pace to throw just about as many games and innings as he did his last two seasons when he was closing for Milwaukee, but he’s now 34 years old and he’s thrown three straight games four times already for Ausmus.

I don’t see KRod getting better down the stretch, I think he’ll be an adventure too many times. Because of that, the Tigers need to consider resting him more and giving others a chance to pith in tight spots. More on that below.

Who can spell Rodriguez as a closer, you ask? I bet you thought I’d say Joe Jimenez, right? Wrong. Jimenez, the “closer in waiting” in the Detroit farm system, is not going to be thrown into a pennant race as a rookie. The Tigers are very conservative with their young players, especially under Ausmus (former manager Jim Leyland was far more likely to entrust a green rookie than the current team leadership).

The lefthanded Wilson is a horse: he pitched in 74 games last year and 70 the year before. He’s got a rubber arm and he has (in the past) shown that he can get more than three outs. Another big bonus: Wilson hardly ever walks a batter: he’s only dished out six free passes this year against 49 K’s in 42 innings through Saturday.

Wilson is my pick as the surprise key to a playoff push in the rest of the season. Perhaps, like the maligned Phil Coke in 2012, Wilson can emerge as a “closer in reserve” for Ausmus down the stretch. And if KRod doesn’t need the help, Wilson’s performance in the 7th and 8th innings will be a key factor nevertheless.

Will the real Anibal Sanchez stand up? Who knows what the Detroit righthander did over the break, but whatever it was it’s worked. In his last four starts dating back to July 19, Sanchez has pitched at least six innings while posting a 3.12 ERA, which is less than half of what it was before that date (6.75, ouch).

At one time, Sanchez’s stuff was nearly as nasty as anyone on the Detroit staff, and that was when the club had Max Scherzer and Doug Fister to go along with Justin Verlander. A few injuries and a few years later and Sanchez looked like a man out of his element in 2015 and the first half of 2016. He was demoted at the end of May, a humiliating blow for the proud competitor. But for the last three weeks he’s pitched well enough to keep the starting job he won back by default.

Indications would be that Sanchez has found some of his old zip, and he’s also keeping the ball lower in the strike zone and avoiding big mistakes. In his last 37 1/3 innings Sanchez has surrendered just three homers, after getting rubbernecked 16 times in his first 71 1/3.

If Anibal can keep going strong, it helps the team immensely because he’s chewing up 2-3 innings that the bullpen was having to work previously. It would be even more welcome if some of that old Sanchez fire came back to the mound.

Here’s my sleeper to be a key factor down the stretch. McCann is 26 years old but he’s still played less than 200 games in the big leagues. He’s not a naturally gifted hitter — he has to work at it — which is hard to do at this level. But he is a very good defensive catcher who can help shut down the running game. He also has raw power and the ability to go on a tear. I could look like a fool (wouldn’t be the first time), but I have a feeling McCann will come up big for the Tigers in August and September.