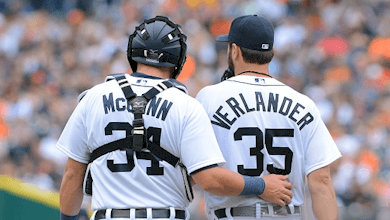 Rookie catcher James McCann and a healthy Justin Verlander were bright spots for the Detroit Tigers in 2015.

And so another baseball season winds down.

The Detroit Tigers didn’t give us a whole lot to cheer about in 2015, and it looks like they are going to finish in last place in the American League Central.

That’s quite a fall from four straight division titles.

Congratulations are in order for the Royals. I’ll admit I was a skeptic when it came to Kansas City. I always thought they did it last year with a lot of smoke and mirrors. I thought their bullpen would come back to Earth, and that the weaknesses in their lineup would be exposed. But now, I wouldn’t be at all surprised to see them hoisting a World Series trophy in October.

Meanwhile, in Motown, it will be a nice consolation prize to see Miguel Cabrera win his fourth batting title. But this was mostly a dud of a season for the Tigers.

Nevertheless, here are five of the most positive developments from 2015 that point to a brighter future:

1. The return of Justin Verlander

This guy was written off for dead by most Tiger fans in this town. With his bloated, long-term contract, some folks were even clamoring for Justin Verlander to move to the bullpen, figuring he no longer had the goods to be a major league starter. After all, they figured, if John Smoltz could do it, why not JV?

Let’s take a look at some reassuring numbers. In his 11 starts since being booed off the mound at Comerica Park on July 19, JV had an ERA of 2.13, and a WHIP (Walks+Hits/Innings Pitched) of 0.90. One metric for starting pitchers that I really like is Game Score (GSc). The formula was developed by Bill James, the stat guru, and adds or subtracts points for different variables in order to determine how effective a starter was in a particular game. But here’s all you need to know: Verlander’s average GSc in those 11 starts was 65. His average GSc for his entire 2011 Cy Young season was 66. Yes, JV is back, and that is welcome news.

His 25 home runs and 59 RBIs in the first half earned Julio Daniel Martinez his first All-Star berth. Ok, he’s slowed down a bit since then, but Martinez should be a legitimate power threat in this lineup for the foreseeable future.

He shouldn’t be judged on this year’s numbers alone. He’ll finish with around 15 home runs, 70 RBIs, and a .250 average, and that’s fairly consistent with what had been predicted of him in his sophomore season. Castellanos is developing some serious home run power. He’ll never remind anyone of Brooks Robinson at third. He may not even remind us of Eric Munson. But if he can develop into a 25 homer, 80 RBI, .270 hitter, the Tigers will take it.

4. Jose Iglesias proving that he can hit at the big-league level

We all knew he could flash the glove. In fact, Jose Iglesias is the best fielding shortstop the Tigers have ever had. He’ll win a Gold Glove or two or three before his career is over. What we didn’t know was whether he could hit enough to justify his presence in the lineup. He has done that.

5. The arrival of James McCann

Tiger fans love this kid, and with good reason. A solid receiver with strong leadership skills, he’s often been compared to Bill Freehan. With his high strikeouts-to-walks ratio (83 K’s, 16 BB’s), his hitting is still a work in progress, but he has shown flashes of power. Moving forward, the Tigers are going to need an in-your-face competitor to lead them back to the top, and McCann may just be that guy.