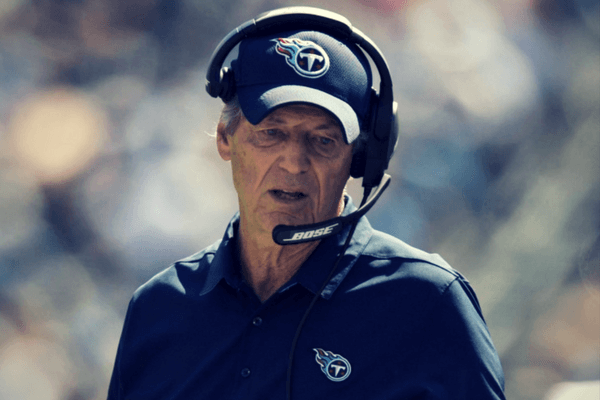 Former Detroit Lion and Football Hall of Famer Dick LeBeau is still stalking the sidelines as defensive coordinator in Tennessee.

Even though the Detroit Lions failed to make the playoffs … again … there were still some Detroit connections in the NFL postseason.
Let’s take a look at the biggest connection, Dick LeBeau.

LeBeau was a Hall of Fame player for the Detroit Lions, and despite making it all the way to Canton as a cornerback, he might just be a better coach than he is a player. All in all, he has spent 59 years in the NFL — 46 years as a coach. Seriously 46 years.

He is currently the defensive coordinator for the Tennessee Titans, who made the playoffs and beat Kansas City 22-21 in the first round before falling to the New England Patriots 35-14 in the second round.

LeBeau is not just a coach, he is a defensive mastermind.

Before joining the Titans three years ago, LeBeau was the defensive coordinator for the Pittsburgh Steelers, during some of their best seasons.

He was the architect of the Steelers’ famed “Zone Blitz,” which led to quite a postseason run for Pittsburgh.

In his 13 seasons with the Steelers, they were the No. 1-ranked defense in the NFL for five seasons and in the top five 10 times. They made the playoffs nine times and reached the Super Bowl four of those seasons, winning two of them.

From 2004-14, LeBeau’s defenses ranked among the top teams in nearly every category over this 11-year period, including: points allowed (1st, 17.9), total yards per game (1st, 287.9), rushing yards allowed per game (1st, 89.5), total first downs allowed per game (1st, 16.9), passing touchdowns allowed (2nd, 206), sacks (3rd, 448) and third down percentage (7th, 37.4%), according to the Tennessee Titans website. Along with the team success, individual success came as well, with outside linebacker James Harrison earning AP Defensive Player of the Year honors in 2008, safety Troy Polamalu earning the same honor in 2010 and LeBeau adding Pro Football Writers of America Assistant Coach of the Year in 2004 and Coordinator of the Year in 2008 from the Sporting News to his resume.

He picked up right where he left off when he joined the Titans. Tennessee had the No. 2-ranked run defense last year.
But lets not forget his days playing for the Lions.

As an NFL player, he played 14 seasons (1959-72) as a cornerback for the Lions and was inducted into the Pro Football Hall of Fame in 2010 . For four decades, he held the NFL record for most consecutive games played at cornerback (171; Ronde Barber broke the record – 215 games).

In his career, he grabbed 62 career interceptions and three Pro Bowl appearances during his 185-game NFL career. In 1970, he led the NFC in interceptions with nine and his 62 interceptions at the time of his retirement ranked third-most (still ninth-most).

One of the most influential defensive coaches in history, LeBeau’s career began in Detroit.

It is too bad that LeBeau was never a coach where he played his entire career. Because while the Steelers were one of the best defensive teams perennially for two-plus decades, the Lions have had some awful defensive years.

Think about it, what if you added a defensive mastermind to a team that already has Matthew Stafford and Calvin Johnson?

The answer is: A contender.

But sadly, we will never know how that story could have ended.